The last Holden car built in Australia was auctioned on Saturday, selling for an eye-watering $750,000.

The bright red 2017 Holden VF was the last vehicle to be assembled, welded together and painted in an auto body shop on Australian soil. 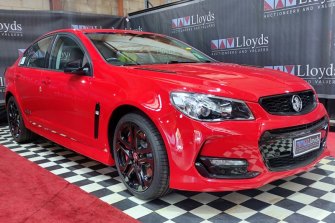 The last Holden made in Australia. Credit:Llloyds

Holden ceased production in Australia after the closure of its last factory in Elizabeth, 24 kilometres north of Adelaide, in October 2017. Holden has since switched to imported models from Germany.

According to auctioneers Lloyds, workers at Australia’s now-shuttered Holden factories took photos with the car and held signs emblazoned with the words “last Holden”. The car also bears the number plate FINL 01.

The car’s former owner was a Holden employee who provided technical support for the company’s paint shop.

The man had to negotiate an agreement with an interstate dealer without seeing the car in question in order to “save it from obscurity and it being sold to an unsuspecting customer”, Lloyds said on its website.

The dealership was unaware of the significance of the car when they sold it to the former Holden employee.

The car was originally expected to fetch somewhere in the vicinity of $500,000.