Beirut: A little-known diplomat has been designated as Lebanon's next prime minister through a rushed process aimed at showing official progress in addressing the country's many crises since a massive explosion destroyed parts of Beirut.

The diplomat, Mustafa Adib, 48, has served as the Lebanese ambassador to Germany since 2013, and his official designation came hours before French President Emmanuel Macron's arrival in Lebanese capital to press for long-delayed reforms that could unlock international aid. 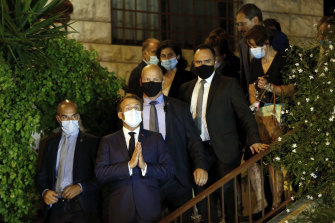 French President Emmanuel Macron and his entourage leave the house of Lebanon’s diva Fairouz, one of the Arab world’s most popular singers, in Rabieh, north Beirut on Monday night.Credit:AP

Anger at the country's political elite over an economic meltdown and this month's devastating port blast was evident as Macron arrived at the home of the 85-year-old artist, feted as a national treasure and symbol of peace.

Protesters gathered outside with placards reading "No cabinet by, or with, the murderers" and "Don't be on the wrong side of history!". Some already chanted against the designated prime minister: "Adib No".

Upon leaving, Macron stopped to speak with the crowd. 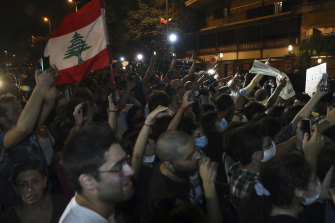 "I made a commitment to her [Fairouz], as I make a commitment to you here tonight, to do everything so that reforms are implemented and that Lebanon receives better. I promise you. I won't leave you," he could be heard saying in TV broadcasts. 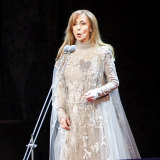 Macron is visiting for the second time in less than a month to press for a new government made up of experts untainted by corruption and capable of rooting out corruption, waste and negligence as well as rebuilding after the August 4 explosion that wrecked swathes of Beirut, killing more than 180 people.

Politicians have failed to take significant steps to address the crises, and protesters have repeatedly taken to the streets to demand the ouster of what they see as the corrupt political elite responsible.

Addressing journalists at the Presidential Palace after his designation, Adib vowed to swiftly confront the many problems.

"There is no time for talks and promises," he said. "It's time to get to work, and God willing we will succeed in picking a ministerial team of specialists and experts." 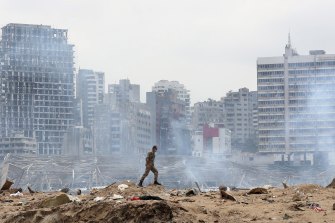 A soldier walks amid the devastation of the August 4 blast in the port of Beirut.Credit:AP

The Beirut explosion, officials have said, was caused by the combustion of 2750 tonnes of ammonium nitrate, a compound used in fertiliser and explosives, that had been improperly storied in the port for six years.

The explosion sparked widespread outrage among Lebanese, who saw it as glaring example of how poorly their leaders have managed the country.

Adib's name surfaced as the front-runner to form the next cabinet over the weekend before he was officially designated by President Michel Aoun.

The designation kicks off a horse-trading process between the country's political blocs to determine the make-up of the cabinet, a process that usually takes at least a few weeks but sometimes much longer.

In Lebanon's complex system of sectarian power sharing, the prime minister must be a Sunni, the president a Maronite Christian and the speaker of Parliament a Shiite.

Outgoing prime minister Hassan Diab resigned on August 10 after the port blast and described the country as being mired in widespread corruption engaged in by the country's politicians, many of whom were militia leaders in the 15-year civil war that ended in 1990.

Diab and his cabinet will continue in a caretaker capacity until a new government is formed.