Boys are lagging further behind than girls after six months without school, survey reveals as pupils head back to classes for first time since lockdown

Boys are 21 per cent further behind in their education than girls after six months without school, shocking new data has revealed.

School children across are going back to the classroom today, with most having been stuck at home since lockdown was implemented in March.

Now, a poll of nearly 3,000 school leaders and teachers has laid bare the devastating impact the shutdown has had on Britain’s children, with the poorest and boys worst affected.

Some 21 per cent of teachers from across 2,200 primary and secondary schools told the National Foundation for Educational Research (NFER) survey that they believed boys had fallen further behind than girls.

Richer pupils are 46 per cent further ahead with their studies than the poorest after lockdown, according to the data.

In total, 98 per cent of those surveyed felt students were not as far along with their learning as would normally be expected at the end of the 2019/20 school year.

However, more than half (53 per cent) of those teaching in the poorest schools in England reported their students were ‘four months or more’ behind in their learning, compared to 15 per cent of teachers in wealthier settings.

The survey also found that the learning gap between disadvantaged pupils and their better-off peers had increased by 46 per cent, adding that the figure was likely to be an ‘under-estimate’.

Its study found that as of July, teachers had on average covered 66 per cent of the curriculum in the 2019/20 academic year. Teachers estimated on average that their pupils were three months behind in their studies. 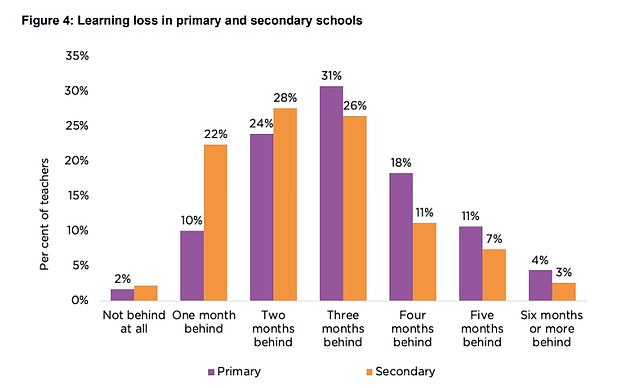 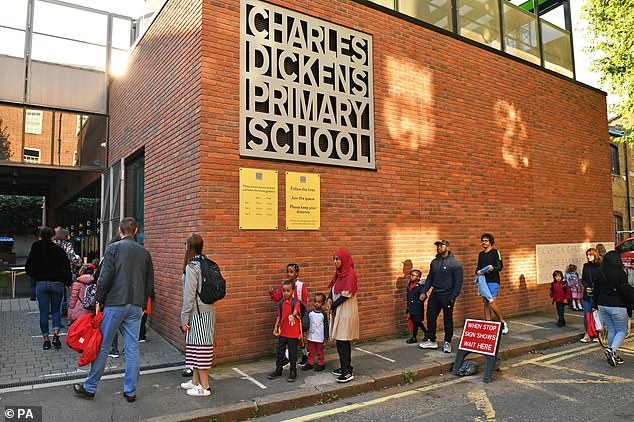 Almost 30 per cent also admitted that they don’t know how to ensure children catch-up on the work they missed during lockdown.

There are also fears that continued social distancing measures could make it even more difficult for pupils to recover.

Meanwhile, more than 35 per cent claimed that their schools hadn’t provided any resources or training to help them teach pupils remotely during lockdown.

Dr Angela Donkin, chief social scientist at NFER, said: ‘Whilst it is crucial that children catch up, we should not assume that teachers will immediately be able to deliver the same quality of teaching, at the same speed, as before the pandemic.

‘There remains a range of barriers for teachers and schools, which means catch-up should be seen as part of the ongoing process of learning recovery, for most pupils, rather than as a quick-turnaround solution.’

She said it was ‘clear’ that additional support needed to be targeted at disadvantaged pupils and schools in the poorest areas.

The majority of pupils had been expected to learn at home throughout the 2019/20 summer term, but teachers reported that only 38 per cent returned their last piece of set work in July, compared to 42 per cent in May.

School leaders said that just over half (56 per cent) of students who were eligible to return did so, with those from black, Asian and minority ethnic (BAME) backgrounds having lower attendance at 49 per cent.

Almost a third (32 per cent) of school leaders said safety concerns from parents were a common reason for their children not attending. 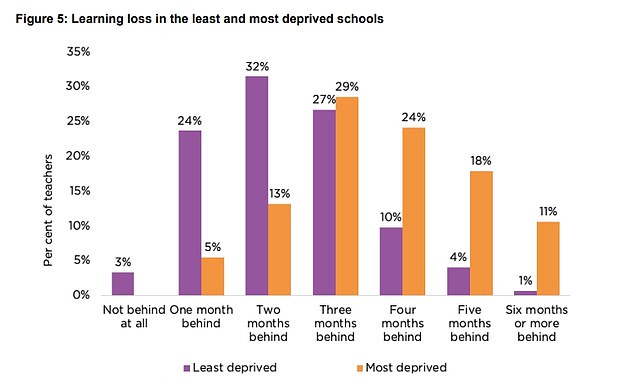 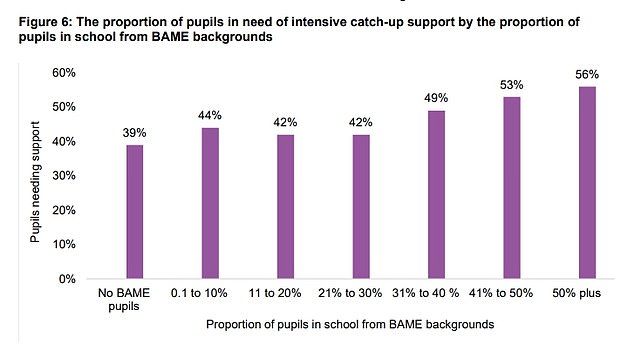 Almost three quarters of teachers (74 per cent) did not feel able to teach to their usual standard while the coronavirus regulations were in force, the survey found.

In an open response question, 49 per cent of 1,034 teachers whose teaching was affected said distancing requirements had a negative impact on areas such as group work and their ability to interact with pupils properly.

More than half of school leaders (51 per cent) also reported that they were using teaching assistants to lead classes.

Teachers estimated that 44 per cent of their pupils will need ‘intensive catch-up support’, the survey said, with the percentage increasing to 57 per cent in the most deprived schools.

The Department for Education said its £1billion ‘Covid catch-up package’ will tackle the impact of lost teaching time and include ‘targeted funding’ for the most disadvantaged students.

Shadow education Secretary Kate Green said: ‘The learning that children have lost in recent months shows that keeping schools safely open to all must be a national priority in the months ahead.

‘When schools are closed, we see deep inequalities become more entrenched, and those from the most disadvantaged backgrounds lose out most.’ 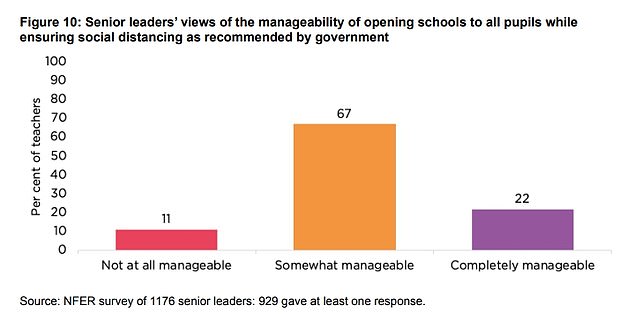 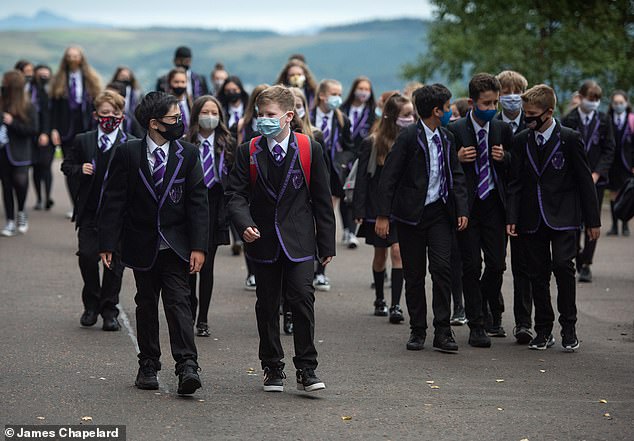 Pupils at Clydeview Academy in Gourock wear masks yesterday, with schools in Scotland already back in session

Paul Whiteman, general secretary of the National Association of Head Teachers, which represents leaders in the majority of schools, said: ‘This is another alarm bell that the Government needs to pay attention to.

‘The Covid-19 pandemic has interrupted education for the majority of children, and schools were already struggling to provide everything children needed before this crisis, damaged as they and other social services have been by a decade of austerity.’

Mr Whiteman said schools will ‘absolutely require’ additional support to ‘play their part in healing the scars’ left by the pandemic.

It comes as a newly-qualified teacher today revealed his fear at being back in school with no personal protective equipment on his first day in the job as millions of children in England and Wales returned to classes from the Covid-19 lockdown for the first time in six months.

‘I will be teaching with no PPE, in an environment where social distancing is impossible. I am scared and so are the students. This Government has failed me and every child in every school. Shame on them.’

In a crucial moment for Boris Johnson’s drive to get the country back to ‘normal’, around 40 per cent of schools in England will open today – with the rest following later in the week.

They were shut by the coronavirus pandemic on March 20, with only vulnerable pupils and the children of key workers allowed to continue classes.

Marcus Rashford, at the Pride Of Britain Awards 2018 in London

Marcus Rashford is spearheading a task force on the issue of child food poverty and is warning of ‘devastating’ effects on the stability of the country if action is not taken quickly.

The Manchester United and England striker was successful in campaigning for free school meal vouchers to be provided to pupils over the summer period.

He had spoken about his own experience of using a food voucher scheme as a child and was praised after pressing the Government into making a U-turn on the issue.

Mr Rashford, 22, has now teamed up with the food industry to shed light on the issue of child food poverty in the UK.

Over the next six weeks, the task force members will dedicate their platforms to sharing stories of those most affected by child food insecurity in the UK.

In a letter to MPs, Mr Rashford said the objective is to ‘see sufficient funds from the Chancellor’s Budget and Spending Review allocated to implementing these without delay’.

The first one is the expansion of free school meals to every child from a household on Universal Credit or equivalent, reaching an additional 1.5million seven-16-year-olds.

The second one is the expansion of holiday provision (food and activities) to support all children on free school meals, reaching an additional 1.1million children.

And the third one is increasing the value of the Healthy Start vouchers to £4.25 per week (from £3.10) and expanding into all those on Universal Credit or equivalent, reaching an additional 290,000 pregnant women and children under the age of four.

In his letter, Mr Rashford wrote: ‘When we pause, listen and reflect on what the future of our next generation could potentially look like, it’s easy to see that if we don’t take action quickly, the issue of child food poverty will have devastating effects on the stability of our country.

‘These children are the future – our next generation of NHS workers, police officers, footballers and politicians.’

Mr Rashford recalls his own experience, writing: ‘I remember the sound of my mum crying herself to sleep to this day, having worked a 14-hour shift, unsure how she was going to make ends meet.’

He said he has sat with parents who have ‘cried with sheer relief that putting food on their children’s plates was one less thing to worry about this summer’.

He told MPs: ‘I spoke to a mother recently who, along with her two young sons, is currently living off three slices of bread a day – soaking them in hot water and adding sugar, hoping that the porridge consistency might better sustain the hunger of her one-year-old child.

‘I spoke to a family who were sleeping on one mattress on the floor – the reason being, just like any good parent would, they had had no choice but to sell every valuable they owned to put food on the table for their children.

‘All of this, a result of unforeseen circumstances that are entirely out of their control, such as redundancy and illness.