London Underground services face severe disruption this weekend as drivers stage a third round of strikes on the last weekend before Christmas.

Transport for London (TfL) said a strike by Rail, Maritime and Transport (RMT) union members is expected on the Central and Victoria lines on Friday ‘despite months of talks’ over changes to rosters.

TfL also said five lines, as well as Night Tube services on the Central and Victoria lines, will be affected on Saturday and into Sunday morning.

The Night Tube, introduced in 2016, was suspended last year because of the pandemic and resumed weeks ago but has been disrupted by industrial action.

The union claims TfL has ‘ripped up’ an agreement on drivers being allowed to choose whether to work on night services.

It says new rosters were imposed without agreement, while London Underground insists drivers will only be rostered up to four night shift weekends a year. 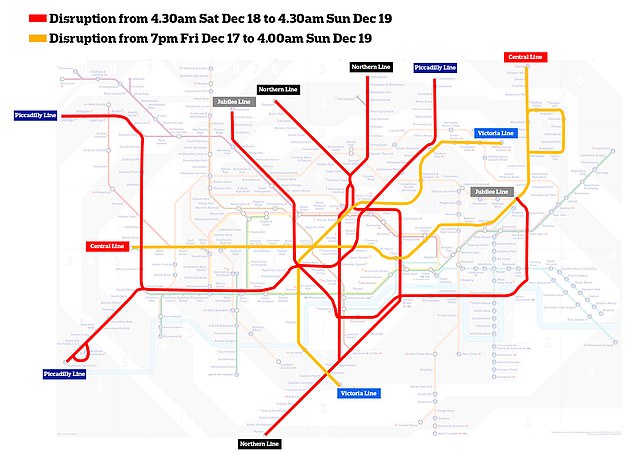 Transport for London (TfL) said a strike by Rail, Maritime and Transport (RMT) union members is expected on the Central and Victoria lines on Friday ‘despite months of talks’ over changes to rosters. TfL also said five lines, as well as Night Tube services on the Central and Victoria lines, will be affected on Saturday and into Sunday morning – the last weekend before Christmas Day

TfL on Wednesday advised commuters to ‘check before they travel and consider using buses’.

Nick Dent, London Underground’s director of customer operations, said: ‘Our view remains that rostering Tube drivers to work up to four night shift weekends each year, which they can swap with colleagues if they wish, is fair and reasonable.

WHICH LINES WILL BE DISRUPTED?

Services on the Central and Victoria lines will ramp down from 7pm ahead of strikes which start at 8:30pm, potentially causing severe disruption on those lines.

Other lines will be running as usual, but will likely be busy, as will other modes of transport, especially in central London.

Full-day strikes will run for 24 hours starting at 4:30am on these lines:

TfL warns of ‘severe disruption during strikes’ with ‘little or no service in some places’.

The Bakerloo, Circle, District, Metropolitan and Hammersmith & City lines will be operating as normal but will be busier than usual.

Services to and from central London are also likely to be busier than normal, as will bus services and local roads.

‘We have also guaranteed that there will be no job losses. We urge the RMT to call off this unnecessary strike action, which will reduce the level of service we can run at a time when coronavirus cases are rising.

‘It will not serve any purpose other than to disrupt Londoners and visitors to the city as they enjoy the festivities at this special time of year.’

It comes after it was revealed earlier this month that a young woman fell from an overcrowded platform onto live underground tracks as commuters faced tube drivers’ strikes.

TfL promised a full inquiry ‘with all the relevant authorities’ after the passenger fell onto live tracks at Tottenham Court Road underground station.

The passenger was rushed to one of the capital’s major trauma centres.

Today, London’s roads stayed the quietest they have been in term-time for five months during the morning rush hour as Britons continued to work from home amid fears over the Omicron variant.

The congestion level reported by TomTom in the capital between 7am and 8am today was 41 per cent – the lowest for that period on a Wednesday since before the summer holidays, when half-term is excluded.

The figures represent the proportion of additional time required for journeys compared with free-flowing conditions. A 41 per cent level therefore means a 30-minute trip will take 12 minutes more than with no traffic.

In comparison, congestion for the same period in London on a Wednesday has been between 49 and 54 per cent for the last six weeks in a row – and the low traffic levels were also replicated in other cities in England today.

Around one million passengers entered or exited the Tube network up to 10am on Tuesday, which was down 26 per cent on the same period on the previous Tuesday and less than half (45 per cent) of pre-pandemic levels.

Transport bosses said the biggest reductions came from stations in the City of London where there were around 318,400 entry and exits yesterday compared to around 415,300 last week.