Singapore: Jacques Herzog has designed the Tate Modern in London and the Birds Nest in Beijing, but this may be his boldest project yet.

On what is among the most expensive pieces of land in the world, above the tunnels that once ferried protesters from Kowloon to Sunny Bay, sits Hong Kong’s newest $4 billion icon.

M+, Asia’s largest gallery, opens on Thursday in the middle of a political storm over censorship and art, representing a city that has changed beyond recognition since the first plans were drawn almost a decade ago. 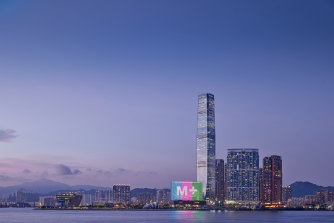 “It is not an innocent piece of land,” says Herzog from his studio in Basel, Switzerland, referring to the rail tunnels that ran underneath the reclaimed earth in West Kowloon that now form a central part of the gallery.

“It’s like the back of a big animal that we found on the ground. It’s a real blood vessel”.

The Pritzker Prize-winning architect – the industry’s highest honour – might as well be talking about the artistic and political veins pulsing through the entire ex-British colony.

The former democratic enclave, once a bastion for the contest of ideas, has had its liberal streak smothered underground by national security laws that have censored films critical of China, forced children to be taught through national security-themed puzzles and pro-Beijing newspapers to accuse art collectives of “anti-government” activities. 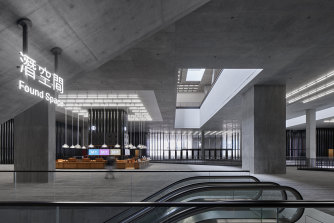 Inside the M+ Credit:Virgile Simon Bertrand

Herzog, who co-founded the firm Herzog & de Meuron with his architecture partner Pierre de Meuron, is aware of the controversial context in which his decade-long, 90-metre-tall, 65,000-square-metre beast is opening.

Rather than hide the rail tunnels, he embraced them. They add a gritty historical and archaeological dimension to a site otherwise filled with air, green space and a giant screen larger than the Sydney Opera House that will project art over Hong Kong Harbour.

“Architecture is always very political, but it’s not ideologically political. Architects cannot be activists,” he tells The Sydney Morning Herald and The Age.

“That’s an impossibility as an architect. If you spend the money of somebody you cannot be an activist at the same time against this person. The role of the architect is to do something which attracts and seduces people to use the place as long as it is an art museum.” 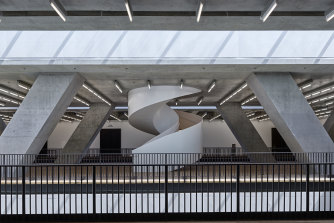 Inside the M+ building in Hong Kong. Credit:Virgile Simon Bertrand

Ultimately, Herzog says architecture is for the people who use the buildings. “These institutions have to be platforms for people to meet and to go to. That I think is a very important statement,” he says. “How to run it is something I cannot control.”

That is the responsibility of Suhanya Raffel, the Australian art director whose last major project, the Art Gallery of NSW’s Sydney Modern was described by former prime minister Paul Keating as a “gigantic spoof” of “institutional conceit and cultural snobbery”.

Raffel has never been shy of rattling the establishment.

She has put on display the Chinese dissident artist best known for sticking his finger up at Beijing.

“Yes, we are exhibiting the work of Ai Weiwei,” she says.

The backbone of the gallery is the private From Revolution to Globalisation collection of Uli Sigg, which spans modern Chinese art from the 1970s until 2012. Sigg’s donation to the gallery includes 26 artworks by Ai Weiwei. Raffel did not elaborate on which works would be displayed.

There are also pieces by Yoko Ono, Nam June Paik and Marcel Duchamp and the epic Asian Field by Antony Gormley, made up of tens of thousands of clay figurines moulded in a village in Guangzhou. 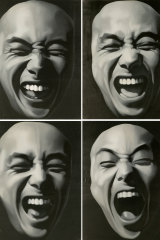 ‘The Second Situation’ by Geng Jianyi, 1987 displayed inside M+

Raffel, who says the collection of visual culture will rival that of the Centre Pompidou in Paris or the Museum of Modern Art in New York, is treading a much thinner line between expression and sedition in Hong Kong than in those other global cities.

In March Hong Kong Chief Executive Carrie Lam told art galleries to be on “full alert” against artworks that could endanger national security.

“We have to respect the freedom of artistic expression, but I’m sure staff [at cultural institutions] are able to tell whether pieces are meant to incite hatred or to destroy relations between two places and undermine national security,” she says.

Raffel says M+ is like any institution in the world, “we are not going to break the law”.

China imposed the national security laws in 2020 to put an end to 18 months of anti-Beijing protests in the semi-autonomous region. More than 80 per cent of prosecutions under the laws so far have been for speech-related crimes for statements such as “liberate Hong Kong”.

The situation requires a closer level of negotiation with the government than many galleries outside China would be comfortable with.

“We work very carefully with the regulatory authorities to ensure that we are compliant,” she says.

“Hong Kong has been and is changing rapidly. And like in any major institution in a major city, we are also reflecting on what that means.

“That said, the curatorial integrity of what we had set out to do is absolutely intact, we are very proud of that. It’s a very important institution to bring to the world, I don’t believe that we will see an institution of this scale again in our lifetimes.” 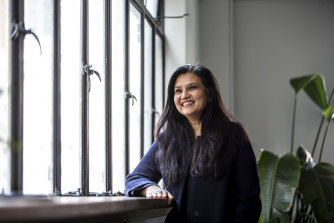 Raffel will have to manage the expectations of an increasingly assertive Beijing, whose influence now stretches far wider than Hong Kong. 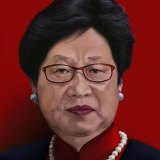 In October, the Chinese embassy in Rome demanded an exhibition by Chinese-Australian artist Badiucao in nearby Brescia be stopped. The Melbourne artist has previously lampooned Lam and Chinese President Xi Jinping by moulding them into one. The gallery declined to cancel the exhibition but Badiucao has been dismayed at what he says is a lack of support from Australian authorities despite its recent strong condemnation of attempts at international censorship by Beijing.

In September, the OzAsia Festival in Adelaide said a local Hong Kong group would not be able to display yellow umbrellas as part of their performance because they were a symbol of the pro-democracy movement.

The politics in Hong Kong are much closer to home.

The gallery next door to M+ is the Hong Kong Palace Museum. When it opens in 2022 it will display relics lent from Beijing’s Forbidden City. The two institutions have been accused of being too patriotic or not patriotic enough by Hongkongers on either side of politics.

“Politics are real here,” Raffel’s predecessor Lars Nittve, said in an interview in 2015. “It has real consequences, and you have to take it very seriously.”

Herzog, who prefers the subtle poetry of Baudelaire to the overtly political drama of Brecht, says there is always space for nuance.

“I think that explicitly political statements in art are boring,” he says. “And I think that the more poetic side has a much more seductive and also a much more effective, long-term effect.” 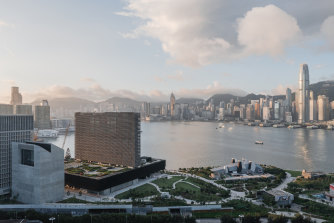 Herzog has created a huge digital canvas in the middle of one of the most divided cities in the world to give artists that opportunity.

How free they are to express it will depend on how the M+ navigates the restrictions of new Hong Kong and Beijing’s tolerance.

“This big slab, it really is a face that looks at the city of Hong Kong,” he says. “It seems like a commercial sign but in fact, it’s the opposite. It’s a platform for artistic messages and we found that especially interesting, also politically interesting, to offer such a tool to the institution and to the artists that show their work.”