Retail giant Macy's is under fire after calling the Zeta Phi Beta Centennial Steppers a “diverse dance group” in a Thanksgiving Day tweet.

Zeta Phi Beta, founded at Howard University in 1920, was one of the many performing groups at the Macy's Thanksgiving Day Parade this year.

MACY'S THANKSGIVING DAY PARADE WILL GO ON WITHOUT LIVE AUDIENCE

"What's that sound, you ask? Why it's the diverse dance group, Zeta Phi Beta Steppers!" Macy's exclaimed in a now-deleted tweet. "Performing a special routine they put together to help us celebrate this unprecedented year."

The tweet prompted a response from MSNBC's "The ReidOut" host Joy Reid who explained that the Centennial Steppers are "not a 'dance group.'"

"Zeta Phi Beta is a Black sorority founded at Howard U in 1920 and part of the Divine Nine," she said. The Divine Nine is a coalition of nine Black sororities and fraternities that make up the National Pan-Hellenic Council. 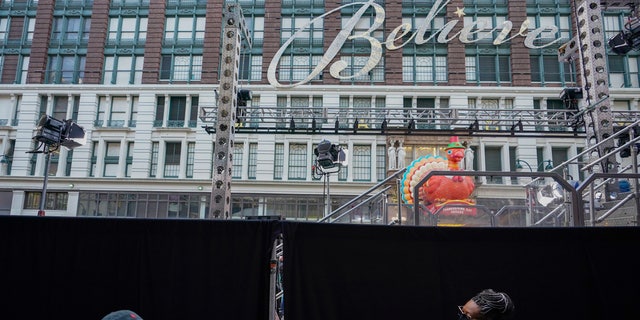 Pedestrians walk past black curtains along 34th Street meant to block the view of a pre-taping of the Macy’s Thanksgiving Day Parade in front of the flagship store in New York, Wednesday, Nov. 25, 2020. (AP Photo/Mary Altaffer)

"I’m tired of businesses using Black entities (including Historically Black Sororities and Fraternities) as a means to look more 'diverse' and accepting," added @_AwesomeKid. "It’s clear how performative this attempt was, due to your lack of research for your own parade performers."

“Look who just STEPPED things up. We loved [email protected] — an international, historically Black Sorority —with us at the #MacysParade for their centennial," it wrote.

Following the performance, Zeta Phi Beta tweeted a celebratory message to their sisters.

"Congratulations again to our Centennial Steppers who performed in the Macy’s Day Thanksgiving Parade this year!" they said. "You all were #Finer and represented Zeta Phi Beta Sorority, Incorporated well!"

The Macy's Thanksgiving Day Parade has kicked off the holiday season for more than 90 years, with thousands of marchers and more than two dozen floats alongside performers.

This year, due to coronavirus concerns, the parade was relegated to a one-block radius of 34th Street in front of the Macy's flagship store in Manhattan.

11/27/2020 World News Comments Off on Macy's under fire after calling Black sorority in parade 'diverse dance group'
Recent Posts
We and our partners use cookies on this site to improve our service, perform analytics, personalize advertising, measure advertising performance, and remember website preferences.Ok