The man acquitted of murdering toddler Jaidyn Leskie in country Victoria more than two decades ago must donate $100 to charity after a run-in with a group of cricketers over a remote-controlled car.

Greg Domaszewicz, who was charged with murdering 13-month-old Jaidyn in Moe in 1997 but found not guilty at trial, on Friday pleaded guilty to possessing a dangerous article and breaching bail. 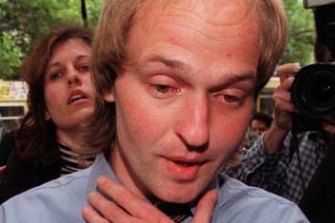 Greg Domaszewicz after he was found not guilty of murder.Credit:Simon O’Dwyer

Melbourne Magistrates Court heard Mr Domaszewicz was operating a remote-controlled car on a cricket field in Newport on November 30, 2019, when some cricketers who had just completed a game told him to keep the car away from the pitch.

After raising his middle finger at the cricketers as they exchanged words, Mr Domaszewicz went to a nearby house and emerged with a “makeshift spear”, a police prosecutor told the court. One of the cricketers believed he was going to be attacked with the weapon and disarmed Mr Domaszewicz by knocking him to the ground.

Defence counsel Zarah Garde-Wilson said her client, now aged 52, armed himself with what was “essentially a broom handle with a sharpened end” in case he needed to defend himself, but ended up suffering bruises when knocked to the ground and disarmed. 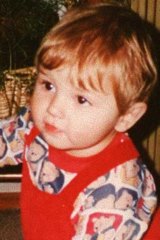 Magistrate Hayley Bate ordered Mr Domaszewicz pay $100 to The Salvation Army and abide by a good behaviour bond for 12 months, without conviction, after he pleaded guilty to possessing a dangerous article and breaching bail, related to him failing to appear before court earlier this year.

Mr Domaszewicz, who the court heard was now on a disability pension and had been diagnosed with post-traumatic stress disorder, watched Friday’s hearing on a video link but did not activate his camera and did not say anything.

In June 1997, he was in a relationship with Bilynda Murphy when her son, Jaidyn, went missing. The little boy’s body was found in a dam on New Year’s Day 1998.

Mr Domaszewicz, who was babysitting Jaidyn on the night he went missing, was charged with murder but was found not guilty at trial at the end of 1998. He has always maintained he is innocent.