How to throw your very own Buckingham Palace garden party! As the Queen’s lawns are opened to the public for the first time (for just £16.50 a ticket), MARK PALMER shows how you can be royalty for a day

Yards away from a traffic-choked six-lane roundabout, on one of London’s busiest and most polluted thoroughfares, is the capital’s best-kept secret.

Hidden from prying eyes by imposing walls topped by spikes and barbed wire to deter any but the most foolhardy trespasser, it is also one of the most secure places in Britain, under constant camera surveillance and patrolled by guards 24/7.

Only a lucky few have seen beyond those walls — but for any granted access, what a paradise found. In the heart of the city, 39 lush acres that are both a horticultural wonder and a haven for wildlife.

There are flower meadows and sweeping lawns, a lake with a waterfall, and a sensational 512ft herbaceous border that, according to one observer, ‘rises towards you like a colourful wave’.

Wandering the gardens at Buckingham Palace has always been by invitation only, a privilege reserved for royal guests or the 24,000 visitors invited each year to the three annual garden parties given by the Queen. 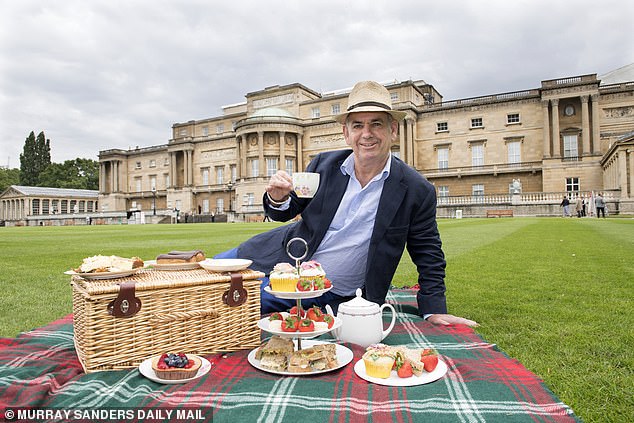 There are flower meadows and sweeping lawns, a lake with a waterfall, and a sensational 512ft herbaceous border that, according to one observer, ‘rises towards you like a colourful wave. Mark Palmer is seen enjoying a picnic on the lawns’

There are no garden parties again this year because of Covid and, sadly, I can’t claim to be a friend of the Windsors. Nor had I, like the infamous Palace intruder Michael Fagan in 1982, ventured over the walls. Yet there I was, stretched out on Her Majesty’s magnificent lawn yesterday, enjoying a picnic as the sun finally broke through the clouds that have blighted July so far.

And I wasn’t the only one. As of this week, for the first time in Buckingham Palace’s long history, anyone who has bought a ticket can picnic at the Palace and roam the wonderful gardens at will.

‘This is almost the first time I’ve been out properly since the start of lockdown and here I am at Buckingham Palace,’ Emilia Dovelle, 27, told me as she and a friend unwrapped their quiche and Scotch eggs.

‘It’s just so much bigger than I’d ever imagined,’ marvelled Joe Atherden, 29, a cabinet-maker from Windsor.

The mind boggles at what King George III would have thought about hoi polloi on what was once his private lawn after he bought Buckingham House from the Duke of Buckingham in 1761.

Mind you, George III was not averse to sharing his garden with others. He and his consort Queen Charlotte amassed a huge collection of exotic animals including an elephant, a family of monkeys and one of the first zebras ever seen in Britain.

‘I feel privileged to be here,’ said Steph Paul, 30. ‘What a lovely thing for the Queen to do after the year we’ve all had. But we don’t know where to start. There seems so much to see.’

There is. This is not only the biggest garden in London — the Archbishop of Canterbury’s residence, Lambeth Palace, is the second biggest at a mere ten acres — but the most inspiring, lovingly tended by 11 full-time gardeners.

There are 85 species of oak, 40 types of mulberry tree and 200 varieties of camellia, not to mention a magnificent magnolia walk.

Her Majesty, who receives a posy of flowers from the garden every Monday morning, was not in residence during my visit but I like to think she would approve of my picnic hamper: floral cupcakes, fresh raspberry tart, strawberries and cream, dainty macaroons, egg-and-cress sandwiches in bite-size triangles and gluten-free, additive-free carrot cake. 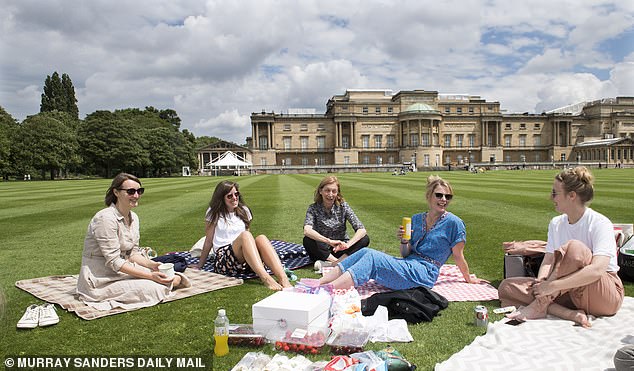 As of this week, for the first time in Buckingham Palace’s long history, anyone who has bought a ticket can picnic at the Palace and roam the wonderful gardens at will

I haven’t a clue where the Queen stands on food additives but she is clearly a fervent believer in eco-friendly gardening.

Large swathes of her expansive plot, which runs all the way to Hyde Park Corner, have been given over to a ‘long-grass policy’ to encourage butterflies and insects, including 300 types of beetle.

And the area around the lake, which serves as the garden’s heart and lungs, is a favourite nesting site for native birds rarely seen anywhere else in the capital, such as the common sandpiper, sedge warbler and lesser whitethroat.

The plane trees planted by Queen Victoria and Prince Albert are impressive; and the myriad hostas stand to attention like an army of beautifully turned-out horticultural footsoldiers. Equally immaculate are the Palace’s friendly ‘wardens’ in their black uniforms with red trim, stationed at various points in case you lose your bearings or wander into the private part of the garden (where I spotted CCTV cameras poking through the shrubbery).

The private area is accessible if you sign up (an extra £6.50 on the ticket price) for one of the Garden Highlights Guided Tours — and I would recommend it.

Our guide, Sarah, explained how the Buckingham Palace garden was a favourite hunting-ground of Henry VIII in the 16th century.

Today’s design dates back to George IV’s conversion of Buckingham House into Buckingham Palace in 1825. He appointed William Townsend Aiton, who was in charge of the Royal Botanic Gardens at Kew, to oversee the remodelling of the grounds.

It was Aiton, inspired by the sought-after architect Capability Brown, who designed the lake and turned what was mainly a classical, formal garden into a more naturalistic landscape.

The rose garden is a tour de force. No two colours share the same bed (of which there are 25, each with 60 bushes) except one, which holds roses given to the Queen as gifts, including a spectacular white variety called ‘True Love’, which was a present from Queen Beatrix of the Netherlands for the Queen and the Duke of Edinburgh’s 50th wedding anniversary.

Opposite the rose garden stands the Waterloo Vase, a stone urn fashioned from a single piece of Carrara marble, weighing in at 19 tons and standing 18ft high.

It was commissioned by Napoleon in anticipation of his conquering of Europe but, after his defeat at Waterloo in 1815, it was passed to the future George IV as a memento of Bonaparte’s humiliation. The idea was to make it the focal point of the Waterloo chamber at Windsor Castle, but that was ruled out because of its weight.

So it was presented to the trustees of the National Gallery in 1836. They weren’t that keen. Edward VII then asked for it to be placed where it is now — out of sight of his wife, who reportedly hated it. I rather liked it, as do some ducks, who return to it every year to raise their young.

At the west end of the garden is the tennis court where George VI played with Wimbledon champion Fred Perry.

He remains the only member of the British Royal Family to compete at Wimbledon, playing in the 1926 men’s doubles when he was Duke of York.

As we headed back to the public area, Sarah told us there are five beehives on the wilder island in the middle of the lake. They produce 160 jars of honey a year for the royal kitchens. Apparently the current Pope, Francis, liked the honey so much, he once asked the Queen if he could have a jar.

As I folded my rug away, the lawn was filling up with other picnickers. None had a spread to match mine, I felt. I also noticed that I was a little overdressed in comparison with their casual attire. But then, picnics at the Palace surely warrant more decorum than picnics in a park.