A recent dose of the measles, mumps and rubella vaccine may play a critical role in preventing children from developing severe illness after being exposed to coronavirus.

A scientific analysis of thousands of global studies by researchers at the Murdoch Children's Research Institute, the University of Melbourne and the University of Fribourg in Switzerland, has identified a striking body of evidence suggesting a simple jab of the MMR vaccine may train children's immune system to fight off the disease. 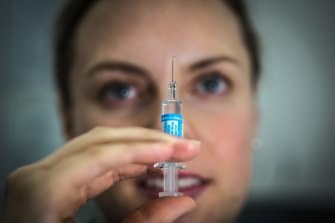 The MMR vaccine is given to young children.Credit:karleen minney

Nigel Curtis, an infectious diseases physician at the Murdoch Children's Research Institute and the scientific paper's lead author, said the analysis suggests the MMR vaccine may be able to kickstart innate immunity, the body's first defence against new bacteria or viruses.

Children typically get two jabs of the MMR vaccine between the ages of 12 months and six years old, which the scientists believe may prepare their immune system to fight off COVID-19.

"It’s called trained immunity. The cells after exposure to these vaccines are better primed, if you like, to deal with subsequent exposure to viruses and they actually have a stronger immune response to fight off any viruses because they have been trained by these vaccines." 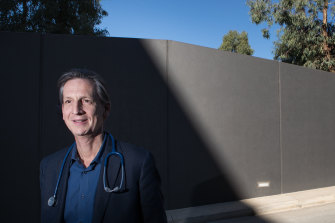 Professor Nigel Curtis is leading the trial of a vaccine to boost the body’s immune response to COVID-19.Credit:Jason South

It follows on from research that suggests that the century old Bacillus Calmette-Guerin vaccine, commonly known as BCG, used to prevent tuberculosis, also has previously unrecognised effects on the immune system, which can actually boost it and enable it to protect against numerous different infections.

Professor Curtis said that in stark contrast to other respiratory viruses, severe disease and death due to COVID-19 were rare in children.

"That is really unusual for us as infectious disease doctors because usually things like influenza are worse in children so this is a complete reversal," he said.

"It tells us there is something very different about the way that this virus causes disease and that has big implications for understanding how we prevent it and treat it. There are about 13 different reasons why we think this may be."

Robert Booy, an infectious diseases expert and professor of paediatrics at the University of Sydney, said it was still unclear exactly why other viruses, such as influenza, measles and chicken pox, were far more likely to cause severe illness in young children than coronavirus.

One theory was that children were exposed to different types of coronaviruses, such as the common cold, throughout their early years and may have unknowingly built up immunity.

Another theory was the idea of "evolutionary advantage": a child's immune system is at its most robust during youth to ensure that child grew up to reproduce.

Professor Curtis said the analysis had found striking evidence that age-related damage to a thin layer of cells – the endothelial cells – which line organs, especially the blood vessels, heart, and lymphatic vessels, profoundly heightened the risk of serious illness from coronavirus.

"COVID-19 can infect these endothelial cells and cause blood vessel inflammation and lead to blood clots, causing strokes and heart attacks," he said.

"The endothelium in children has experienced far less damage compared with adults and their clotting system is also different, which makes children less prone to abnormal blood clotting.”

Most children infected with SARS-CoV-2 are asymptomatic or only have mild symptoms, such as a fever, cough or sore throat.

Whether children are less often infected by coronavirus is subject to an ongoing debate, however, large epidemiological studies suggest only 1 to 2 per cent of all cases are children.

Scientists also believed different levels of microbiota (bacteria and other germs) in the throat, noise, lung and stomach, also influenced susceptibility to COVID-19 and played an important role in the regulation of immunity, inflammation and in the defence against illness.

“Children are more likely to have viruses and bacteria, especially in the nose, where these bugs might limit the growth of COVID-19," Professor Curtis said.

Levels of vitamin D were also higher in children lending weight to the theory the vitamin, which has anti-inflammatory properties, could also be a piece of the puzzle.

Professor Curtis said understanding the underlying age-related differences in the severity of COVID-19 would provide important insights and opportunities for prevention and treatment of SARS-CoV-2 infections.

"Initially, we were asking why are children so protected and then it dawned on us that maybe we were looking at it the wrong way around. Maybe it’s not that children are protected but simply that adults are more vulnerable," he said.

Professor Curtis is leading a World Health Organisation-approved study testing BCG's ability to prevent coronavirus in healthcare workers, while a trial is underway in the US using the MMR vaccine in frontline healthcare workers.

12/02/2020 World News Comments Off on Measles mumps-rubella vaccine may help protect kids against COVID-19
Recent Posts
We and our partners use cookies on this site to improve our service, perform analytics, personalize advertising, measure advertising performance, and remember website preferences.Ok