An Australian man has been killed and his wife seriously injured after their car was struck from behind on a scenic Utah highway by a vehicle driven by European tourists.

The couple, from Melbourne, were in a Volkswagen Jetta driving east on Utah State Route 24 about 10am on Friday when they "slowed to, or nearly to, a stop in the lane of travel". 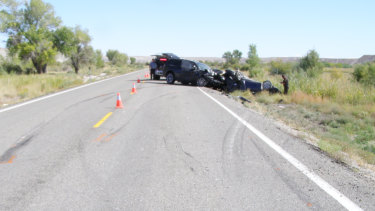 A Melbourne man has been killed and his wife seriously injured after their car was struck in Utah.Credit:Utah Department of Public Safety/AAP

The Utah Highway Patrol said the Swiss and Austrian occupants of a larger Dodge Durango sports utility vehicle failed to see the Jetta and slammed into the Australians.

The Jetta rolled upside down and off the highway.

"The male driver of the Jetta was killed," the Utah Highway Patrol accident report states.

"The Jetta passenger, his wife, was seriously injured and flown to St Mary's Hospital in Grand Junction, Colorado".

The Europeans were taken to a local hospital with minor injuries.

Drugs or alcohol were not suspected as contributors to the crash and seat belts were used, the highway patrol said.

09/30/2019 World News Comments Off on Melbourne man killed in Utah car crash
Recent Posts
We and our partners use cookies on this site to improve our service, perform analytics, personalize advertising, measure advertising performance, and remember website preferences.Ok