Mexican cartel threatens to kill female news anchor for ‘unfair coverage’ and siding with its rivals: ‘I will come for you and I will make you eat your words’

One of Mexico’s most powerful drug cartels has threatend to kill a female cable news anchor for what they claim is unfair coverage.

The masked cartel spokesman went after Milenio Television, a media outlet that also has a major newspaper chain, over its preferential treatment to self-defense groups that have been at war with the criminal organization in the western Mexico state of Michoacán.

‘I am not against freedom of expression, but I am against whoever attacks me directly because they are receiving money from the self-defense groups,’ he read on camera.

It was unclear if the person reading the message was Oseguera himself. The man also singled out Milenio evening news anchor Azucena Uresti, over her direct attacks against Oseguera – who is wanted by the United States government.

He said: ‘But you, Azucena Uresti, one thing I let you know, don’t be an idiot and chill the f**k out because I assure you that if you don’t chill the f**k out and you keep attacking me, I assure you that wherever you are I will come for you and I will make you eat your words even if I am accused of femicide because you do not know me, Ruben Oseguera Cervantes. I am not a debt collector, nor do I extort, nor do I kidnap.’ 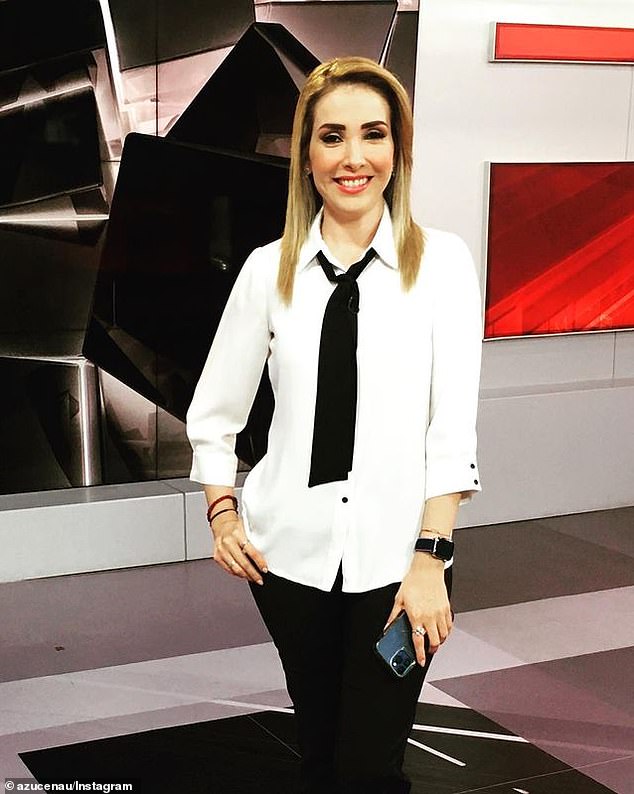 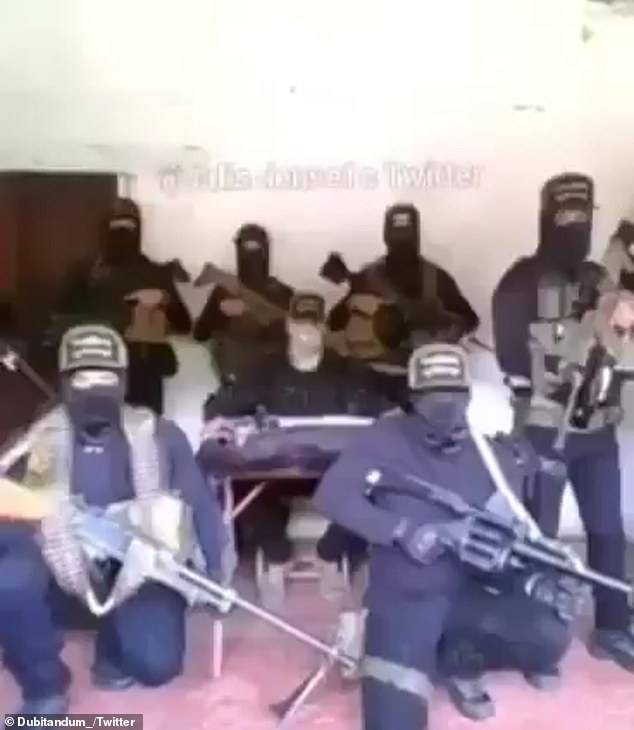 Members of the Jalisco New Generation Cartel, who appeared in a shocking video that threatened a media network in Mexico

Despite the vile threat, Uresti anchored Monday evenings newscast and thanked the outpouring support she had received.

‘The day lacks hours to thank each one of those who today showed me their love, solidarity and company,’ she wrote on Twitter. ‘I feel them close. I appreciate your words and actions enormously. Thank you from the heart! 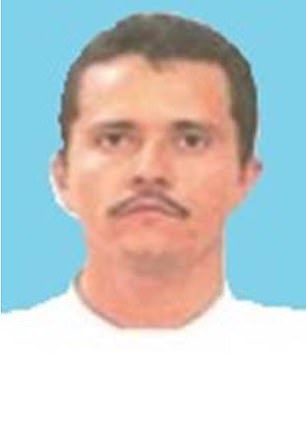 Ruben ‘El Mencho’ Oseguera is the leader of the Jalisco New Generation Cartel, one of Mexico’s most powerful criminal groups. The United States government is offering a $10 million reward for information leading to his arrest and/or conviction

‘I want to express my solidarity with the journalist Azucena Uresti for the threat she received from one of the criminal organizations. I want to tell you that you can count on us,’ he said.

‘I reiterate my solidarity with this journalist and all journalists with the guarantee that our government will always protect those who carry out this profession of journalism,’ he added. ‘We are going to be with her, supporting her, protecting her, she is not alone.’

The message mentioned Hipolito Mora, who organized a self-defense force in Michoacán nearly a decade earlier, but who more recently has distanced himself from such groups, as well as Los Viagras, a criminal group operating in the state.

The Jalisco cartel representative said in the message that he did not want to inhibit freedom of expression, but just wanted the coverage to be even.

Milenio Television said in a statement late Monday that Uresti had its total support, as did other journalists. It demanded a rapid investigation that guaranteed Uresti’s safety and denied that it had ever favored any group in it coverage.

Threats against journalists are not empty talk in Mexico. The Committee to Protect Journalists considers Mexico the deadliest country in the Western Hemisphere for journalists.

The Jalisco cartel has also shown itself to have nearly unlimited reach within Mexico. In June 2020, cartel gunmen carried out a brazen attack in Mexico City that left the police chief seriously wounded and killed three others.

The U.S. Department of Justice is offering a $10 million reward for information that could lead to the arrest and/or conviction of Oseguera.

According to the Drug Enforcement Administration’s 2020 National Drug Threat Assessment Report, the cartel was identified as one of the nine drug cartels that is a major threat to the United States by flooding its streets with fentanyl, heroin, methamphetamine, cocaine and marijuana. 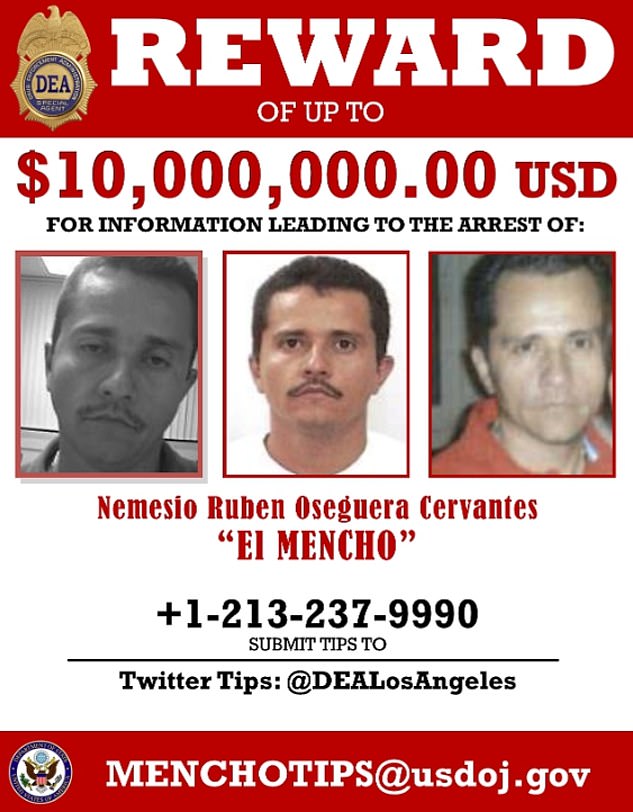 According to the Drug Enforcement Administration’s 2020 National Drug Threat Assessment Report, El Mencho’s organization is one of the nine drug cartels that is a major threat to the United States by flooding its streets with fentanyl, heroin, methamphetamine, cocaine and marijuana. 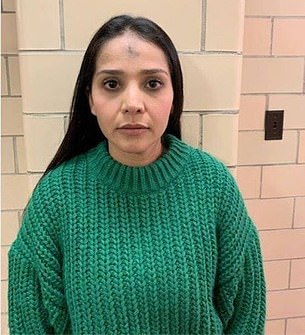 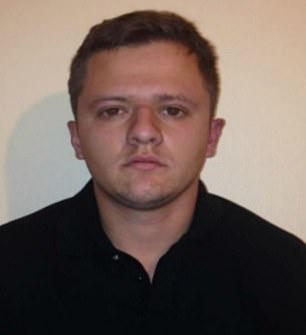 Second to the Sinaloa Cartel – co-founded by the jailed Joaquín ‘El Chapo’ Guzmán –  the criminal organization has influence in 23 of the Mexico’s 32 states. The cartel managed to expand across the border to 11 states in the United States, including Hawaii, and the U.S. territory of Puerto Rico.

The DEA’s report found that the cartel ‘smuggles illicit drugs into the United States by accessing various trafficking corridors in northern Mexico along the southwest border including Tijuana, (Ciudad) Juárez, and Nuevo Laredo. The (cartel) also has influence over the busiest port in Mexico, the Port of Manzanillo, and utilizes that influence for the distribution of large quantities of drugs.’

In June, Oseguera’s daughter, Jessica Oseguera, a dual U.S.-Mexico citizen, was jailed in Washington, D.C., after she admitted to being involved with transactions and dealings with six Mexican companies that were sanctioned by the US Treasury Department in September 2015 and 2017.

His California-born son, Rubén ‘El Menchito’ Oseguera, is currently in custody of U.S. authorities and is facing gun and drug trafficking charges.

Authorities considered him the heir to the cartel’s throne and labeled him the organization’s second-in-command prior to his June 2015 arrest in Mexico.

He vehemently denied that he was El Mencho’s son and fought his extradition to the United States by writing a two-page letter to Mexico President Andrés Manuel López Obrador, claiming he was an ‘honest person, hard worker, humble [and] devoted.’