The mayor of a Mexican village is pressing attempted murder charges against locals who tied him to the back of a truck and dragged him through the streets for failing to deliver on an election pledge.

Jorge Luis Escandon Hernandez, who managed to escape without any major injuries, also wants those responsible for the incident on Tuesday to be charged with abduction.

Mexican media reports that the politician was pulled out of his office in the city of Las Margaritas, Chiapas, by farmers from the local Santa Rita El Invernadero village. 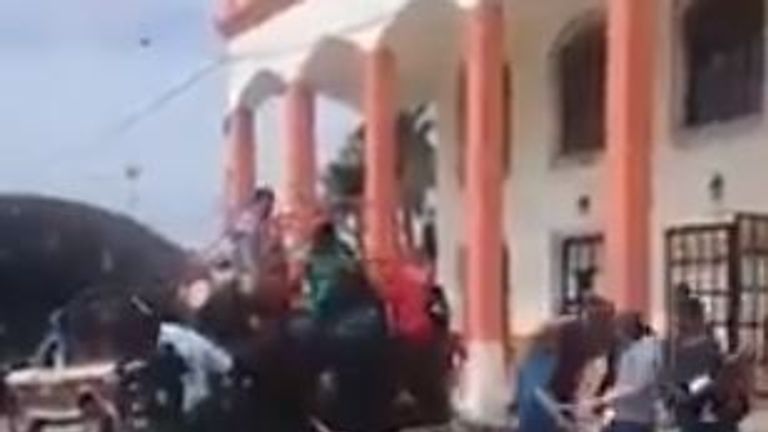 According to national newspaper Excelsior, they are unhappy that he has failed to deliver on a campaign promise to repair an important local road.

Video posted by the news website Tabasco Al Minuto shows Mr Hernandez being forcefully dragged from his office by a large group of people.

CCTV footage from further down the street, obtained by the outlet Tinta Fresca Chiapas, then shows him being pulled along by a truck, seemingly attached to the vehicle by a rope around his wrists.

Dozens of police officers were reportedly required to stop the truck, which was followed by scuffles.

According to La Republica, at least 20 people were injured.

Eleven people have been arrested in connection with the incident and extra police officers have been deployed to the village and the mayoral office.

Mr Hernandez was assessed by doctors and is now said to be safe, the office for the state attorney general said.

The state prosecutor has said it “condemns these violent acts”, with the national guard also being tasked with conducting patrols on the streets of the city.

Related posts:
10/09/2019 World News Comments Off on Mexican mayor dragged through streets by angry villagers on truck
Recent Posts
We and our partners use cookies on this site to improve our service, perform analytics, personalize advertising, measure advertising performance, and remember website preferences.Ok