Miami: Miami Beach has declared a state of emergency in its entertainment district due to an influx of young holidaymakers who have inundated the city.

All restaurants, bars and businesses will be required to close by 8pm and a curfew will be imposed for 72 hours. 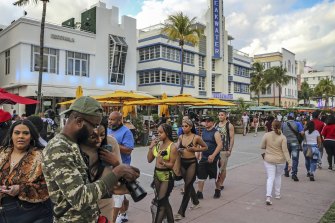 “As we hit the peak – at the peak of spring break, we are quite simply overwhelmed in the entertainment district,” Miami Beach interim city manager Raul Aguila said at a press conference on Saturday, US time. “Folks, this is not an easy decision to make, we are doing that to protect the public health and safety.”

The decision, Aguila said, is necessary to protect residents and spring breakers alike.

“I stay up at night and worry [as to] when I’m going to be getting a phone call about some event that’s happening,” Gelber continued. “We see the videos, the photos of throngs of people, sometimes something happening that creates unrest… or worse and there’s just no reason to endure that.”

There is simply too much disorder for the Miami Beach Police Department to handle, Gelber said.

As part of the state of emergency a number of roads were closed to both cars and non-residents.

Some local businesses have already taken steps of their own to address the stress of so many visitors to the area that have been causing disturbances.

The Clevelander South Beach, a Miami institution on Ocean Drive, opted to halt its food and beverage services, closing the doors to its on-site restaurants temporarily amid spring break chaos until Wednesday at least after witnessing spring break-related situations getting out of control, including damage done to a neighbouring restaurant.

“We do not want to wait for something more terrible to happen,” Gelber said at the press conference.

Spring break chaos due to ‘anything goes’ mentality

Because most pandemic restrictions have been lifted in Florida, people are coming with an “anything goes” mentality, Miami Beach Mayor Dan Gelber said.

On Monday, the Miami Herald reported, a man was fatally shot near a residential area tied to a South Beach shooting.

“It’s like a triple threat: We’ve got too many people, too many coming with a desire to go wild and we have the virus,” Gelber said. “It really poses a multifaceted peril for us.”

The city has also implemented “zero tolerance for all of our ordinances,” Gelber said, which means Miami Beach Police are making arrests for having open containers and more.