Keep your eye on the bat, too! Moment Angels star Mike Trout’s splintered bat shatters INTO the mask of home plate ump who is left with cuts on his face

An interleague game at Dodger Stadium in Los Angeles nearly turned tragic on Tuesday night when shards from a broken bat sailed into the mask of home plate umpire Nate Tomlinson.

Tomlinson suffered cuts to his face, but avoided any serious eye injury, although he was escorted off the field following an examination by team trainers.

The incident unfolded in the top of the ninth inning of the Dodgers’ 2-0 victory with a bloop single by Angels star centerfielder Mike Trout. 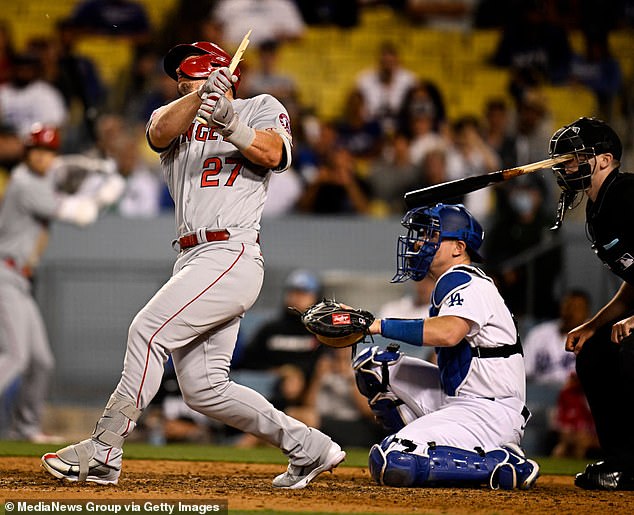 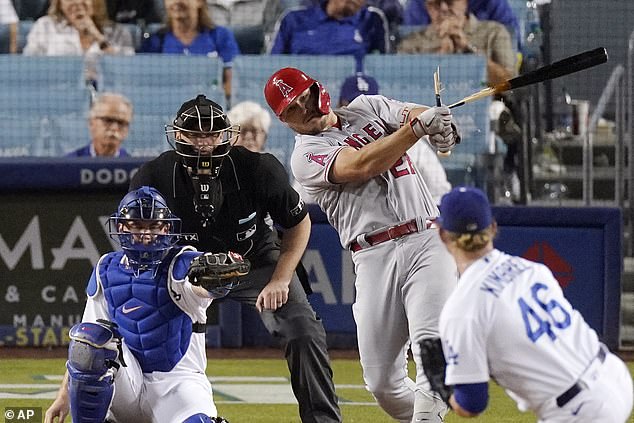 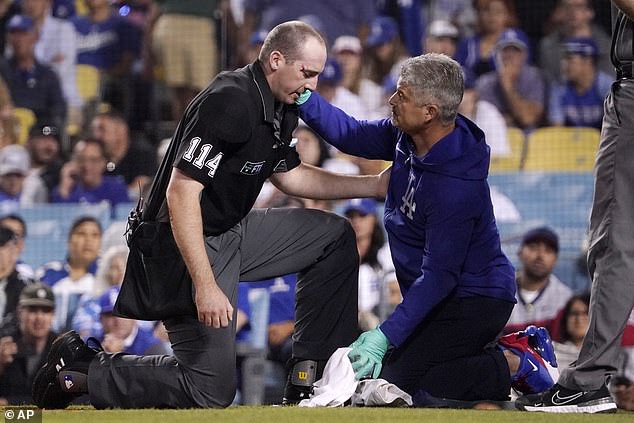 Tomlinson, left, is checked on by a Dodgers trainer after he was hit in the face by a broken bat

Although the ball flew out to shallow center field, ultimately falling between Dodgers second baseman Gavin Lux and centerfielder Cody Bellinger, Trout’s attention was clearly focused on Tomlinson, who could be seen falling backwards.

As the replay revealed, Trout’s bat shattered above the handle, causing the barrel of the bat to flip backwards with the broken end facing Tomlinson.

Without any time to react, Tomlinson face was cut when the splintered end found the opening of his mask, nearly causing a significant eye injury.

After a brief delay, as Dodgers trainers tended to Tomlinson, the third-year umpire walked off the field under his own power with some blood trickling down his face.

He was taken to an emergency room, according to USA Today’s Bob Nightengale, but avoided any serious injury.

Angels star Shohei Ohtani followed with a double, pushing Trout to third, and third baseman Matt Duffy walked, but the Dodgers managed to get the final to outs to seal the 2-0 win.