This is the bizarre moment an angry motorist armed with a metal bar confronts a man dressed in a suit in a ‘road rage’ fight, before the pair suddenly resolve their dispute and fist-bump each other.

Dashcam footage shows a man dressed in a tracksuit carrying a large object and angrily approaching another driver, as the pair begin arguing with each other.

Despite the two men appearing to be seconds away from a full-blown fist fight, things take a surprising turn as they seem to resolve their issues. 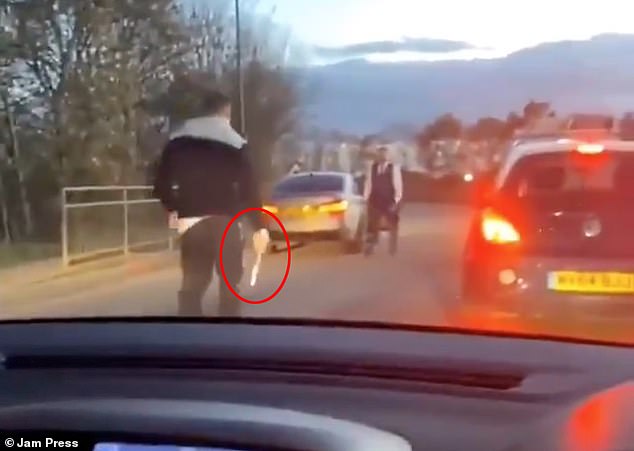 One man can be seen carrying a large metal object (circled) as he approaches another motorist dressed in a suit in the dashcam footage, thought to have been taken in Birmingham

A video of the incident, thought to be taken in Birmingham, was recorded by an onlooker and shared to Twitter yesterday, accumulating over 22,000 views.

Towards the start of the clip, the suit-clad man can be seen pointing his fingers and flapping his arms around as they engage in what appears to be a vicious war of words.

The person filming the video can be heard saying: ‘Fam, what the f*** is going on bro, trying to get to work.’

One of the men can be seen laughing before the pair decide to fist bump things out and walk away.

Social media users reacted to the footage, with some questioning whether the video had been staged. 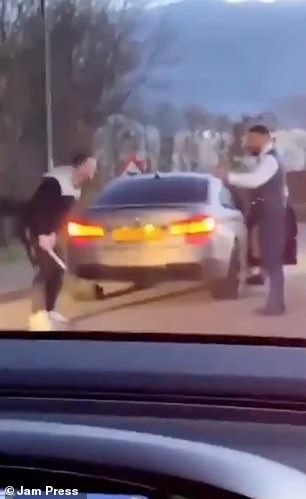 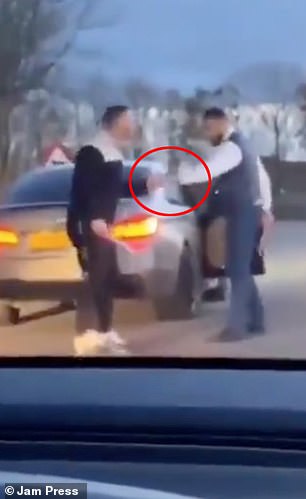 One posted: ‘At least it seems like it was resolved.’

Another wrote: ‘Ran up to him with a tool and apologised.’