More than 500 of the DVLA’s 6,000 workers in Swansea have caught coronavirus since March – as workers accuse bosses of ‘encouraging staff with symptoms to return to work’

More than 500 cases of coronavirus have been recorded at Swansea’s Driver and Vehicle Licensing Agency (DVLA) offices amid claims by employees that staff with symptoms were encouraged to return to work.

Some 6,000 workers are employed at the DVLA site in Swansea and 500 have caught coronavirus, although it is not known where they were infected.

It is thought to be Britain’s biggest workplace outbreak and has increased pressure on ministers, with critics claiming they have failed to protect workers.

A number of employees, including those classed as vulnerable, say they were still told to come into the office while millions of others stayed at home, due to the ‘essential nature’ of its public services.

Furthermore, DVLA workers claim they were told to turn off their mobile test-and-trace apps to avoid phones pinging while in the office, the Guardian reports.

The agency insists that while there have been 535 cases at the Welsh site since the start of the pandemic in March, there are currently no positive tests among its workforce at the contact centre – where hundreds of workers deal with thousands of calls from motorists every day – and just four cases across the whole estate.

A large number of the positive cases are understood to have occurred just before Christmas, when transmission infection rates were high in the Swansea area, and a bleak nationwide picture forced millions to cancel their festive plans.

Around 6,000 people are employed at the site, meaning some nine per cent of the workforce have been infected at one time or another.

Reports also claim that Covid-related absences have been counted against employees’ sick leave, with a warning triggered if that then lasts more than 10 days.

Workplace safety network, The Hazards Campaign, said it was ‘absolutely shocking’ a government agency was responsible for what is thought to be the UK’s biggest work-based outbreak, while the Public and Commercial Services Union called on Transport Secretary Grant Shapps to take action.

General secretary Mark Serwotka told the Guardian: ‘It is a scandal that DVLA are not doing more to reduce numbers.

‘Ministers must intervene and ensure DVLA are doing their utmost to enable staff to work from home and temporarily cease non-critical services.’

Mr Shapps had encouraged workers to return to offices just before the DVLA outbreak first started, telling employees across the country: ‘It is now safe to go back to work.’ 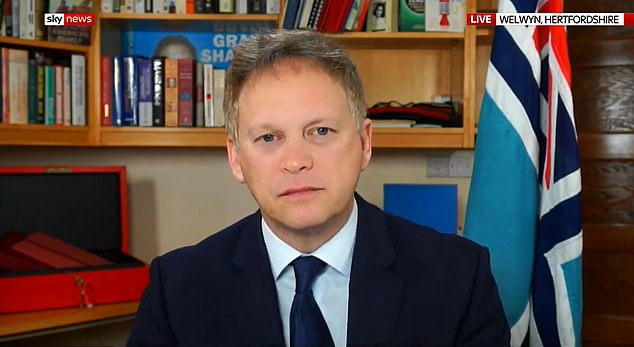 A DVLA spokesperson said: ‘Staff safety remains a priority for DVLA, as it has throughout the pandemic, and we continue to follow all relevant guidance and advice to help keep our offices Covid secure, including the latest advice from Welsh Government.

‘Staff in roles that enable them to work from home are doing so and have throughout, in line with current government advice.

‘However, in view of the essential nature of the public services we provide, some operational staff are required to be in the office where their role means they cannot work from home.’

The agency was contacted for a response to claims staff with symptoms were still encouraged to come into work, though a spokesperson said that when a person is alerted by track-and-trace that they have been in close contact with someone who has tested positive, they must self-isolate as required, and that staff are regularly reminded of this.

A spokesperson for the Department for Transport added: ‘The safety of all staff is a matter the DfT takes incredibly seriously which is why we have thoroughly reviewed, and are extremely confident in, the rigorous processes the DVLA has in place to protect staff at their estate.’