At least 106 people have been killed across Myanmar after security forces opened fire on protesters, according to local media reports.

The deadly tally is said to include 13 in the country’s second-biggest city, Mandalay, nine in the nearby region of Sagaing and seven in the commercial capital Yangon.

A five-year-old is reported to be among those killed.

The shootings came as people took to the streets again to protest against the 1 February coup, in defiance of a warning that they could be shot “in the head and back”, as the junta celebrated Armed Forces Day. Demonstrators had referred to the public holiday by its original name, Resistance Day, to mark the beginning of a revolt against Japanese occupation in the Second World War.

This year’s event was seen as a flashpoint, with protesters threatening to bolster their public opposition to the coup with more and bigger demonstrations.

Speaking in the wake of the latest killings, Dr Sasa, the disbanded democratic parliament’s special envoy to the UN, said: “Today is a day of shame for the armed forces.

“The military must stop killing its own people.”

Calling on the international community to “act quickly before it’s too late” and bring in coordinated, targeted sanctions, he told Sky News that the military must release democratically elected leader Aung San Suu Kyi and come to the negotiating table.

Without action, he said, Myanmar would see the “greatest civil war that we’ve never seen before”.

The shootings came as a rebel leader told Sky News that Myanmar’s armed ethnic groups will not stand by and do nothing if the military continued to kill demonstrators.

After leading a military parade in the capital Naypyitaw, the junta’s leader General Min Aung Hlaing repeated that his regime would hold “a free and fair election” and hand over power afterwards, but gave no timetable. In a live broadcast on state TV, he said: “The army seeks to join hands with the entire nation to safeguard democracy.

“Violent acts that affect stability and security in order to make demands are inappropriate.”

The number of people killed in the unrest since the overthrow of Aung San Suu Kyi’s elected government now stands at around 380.

However, monitors have cautioned this only includes verified cases, with the actual number of casualties “likely much higher”.

In a statement, the US ambassador to Myanmar Thomas Vajda said: “On Myanmar’s Armed Forced Day, security forces are murdering unarmed civilians, including children, the very people they swore to protect.

“This bloodshed is horrifying. These are not the actions of a professional military or police force.”

‘We will not stand by’: Ethnic rebel chief’s warning to Myanmar junta – By Siobhan Robbins, South East Asia correspondent

An ethnic rebel leader has warned Myanmar’s military his soldiers will strike back if security forces continue to kill civilians.

Lieutenant General Yawd Serk, a political and military commander in the country’s Shan State, told Sky News: “The ethnic armed forces are watching closely whether the military is going to continue to kill civilians. “If the Burmese army is going to continue to use their weapons and kill peaceful protesters, the ethnic groups are not going to sit back and do nothing. There could be big fighting.”

“If they continue to kill peaceful protesters, we will not stand by.”

Lt Gen Yawd Serk, the chairman of the Restoration Council of Shan State (RCSS), is the commander of one of more than two dozen ethnic armed groups that operate in Myanmar’s borderlands. As the crackdown on protesters intensifies, one source claimed some people have begun approaching some of the rebel groups for combat training so they can learn to fight back.

Asked if Shan forces would train civilians, Lt Gen Yawd Serk said: “We stand together with the people and if they come and seek assistance from us, we are ready to provide it… if they want to be trained, we have the training.”

However, he believes evidence from current protests suggests people want the demonstrations to remain as peaceful as possible, so were only arming themselves with basic protection like slingshots.

“They are trying to defend themselves, not [trying] to go to war,” he said.

He also rejected the idea that his soldiers would travel to the big cities to fight against the junta.

“If there was a federal army for example, the Shan armed forces would take care of the Shan State.

“It does mean, for example, the armed forces will go into Mandalay or Yangon,” he said.

Describing General Min Aung Hlaing, as a “selfish general” who “does not care about other people”, the Shan State chief expressed concern that Myanmar could soon face a humanitarian crisis if the brutal violence continues. 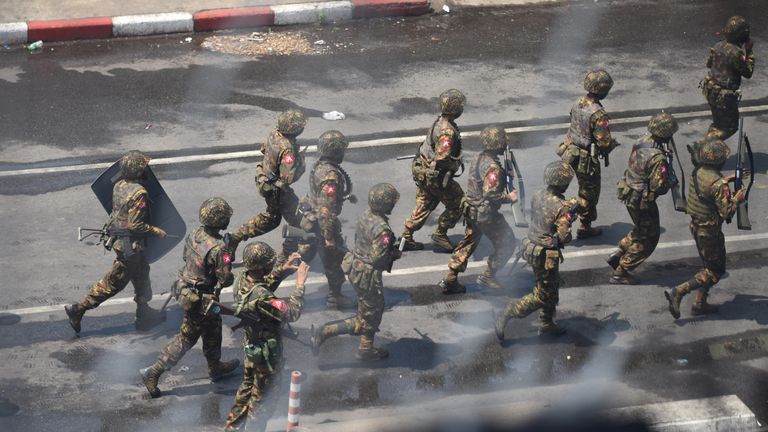 In a statement, the UN in Myanmar said it is “horrified by the needless loss of life” in the bloodiest day since the coup and said the military “has turned against its own people”.

“The violence is completely unacceptable and must stop immediately,” the statement said. “Those responsible must be held to account.”

More than 8,000 ethnic Karen people have fled their homes to escape an offensive by Myanmar’s military.

“We are very concerned about the situation because the military is killing peaceful protestors, so they do not value the lives of civilians.

“Another concern is because civilians have to flee into the jungle… they might face difficulties with shelter or food,” he said.

Lt Gen Yawd Serk urged foreign countries not to support the military government – warning the Tatmadaw would not stop the killings.

He said: “It is very difficult for the Burmese army to compromise or even give in because they have killed civilians and they know because of their actions they could be charged and have to go to the court so they know that they cannot give in.

“They are going to rely on their arms to kill civilians in order to maintain power.”