Taiwan: Myanmar’s military regime has moved to shut down Facebook, blocking one of the main social media channels being used by the nation’s citizens to express opposition to a coup against the democratically elected government this week. 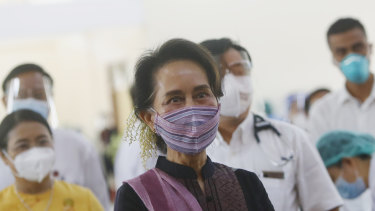 The Southeast Asian nation’s army seized power on Monday, cutting short a transition to democracy and drawing condemnation from concerned citizens and the international community.

Public anger has so far not translated into mass street protests, although a small group waved banners and chanted anti-coup slogans in Mandalay yesterday while people took part in a noise campaign on the streets of Yangon after calls to show civil disobedience went out on social media.

Facebook is used by roughly half of the 53 million population. Many users in the country have changed their profile pictures to Aung San Suu Kyi, the popular civilian leader arrested during the coup, or to the red colour of her National League for Democracy party, which won 83 per cent of votes in a November election.

There were reports that members of the party gathered in hostels in Naypyitaw, the capital, yesterday to convene their first session of the parliament, which should have sat for the first time this week.

Facebook has also been used to share plans for evening protests, where residents have banged pots, pans and other household items on their balconies in a symbolic gesture to “ward off evil”.

The military has warned against the posting of what it said were rumours on social media that could incite rioting and cause instability.

Other social media channels including Twitter and Signal remain online, but the closing of Facebook presents a huge disruption to daily life.

Suu Kyi was charged on Wednesday with the illegal possession and use of imported walkie-talkies, while Win Myint, the president, was charged with violating COIVD-19 prevention rules. Both were remanded in custody and face up to three years in jail if convicted.