NIGEL Farage has declared that Britain has won as he boasts that the "war is over" after a Brexit deal was announced today.

Boris Johnson today gave the nation an early Christmas present as he secured a historic Brexit deal which finally sees the UK take back control from the EU and end four years of bitter wrangling. 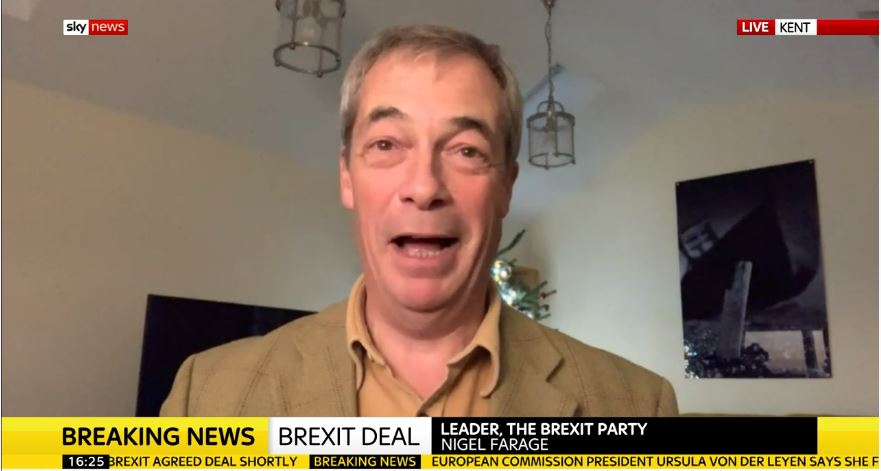 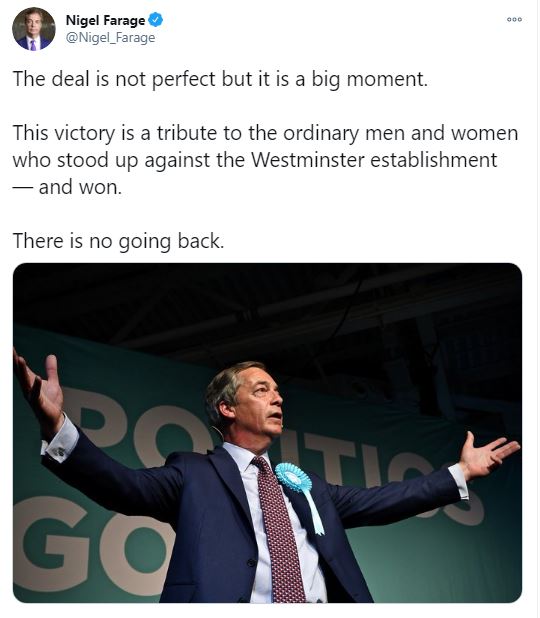 Now the leader of the Brexit Party has said that history has been made and that it is time to celebrate as the deal is the "beginning of the end of the EU."

Speaking on Twitter the Brexiteer said: "However unhappy I might be about some of the detail, in 100 years time, kids in school will read that the people beat the politicians."

He added: "The deal is not perfect but it is a big moment.

"This victory is a tribute to the ordinary men and women who stood up against the Westminster establishment — and won. There is no going back."

And speaking on Sky News he said although he had his worries, this is the "beginning of the end of the EU".

When asked if it was the kind of Christmas present he wanted he said: "I'm saying it's not perfect but I'm worried we're going to be closely aligned to EU rules.

"That's what the EU bosses are saying that we will not be able to step out of line without them having the threat of imposing immediate tariffs.

"What I did think was good news was when Barnier said that the British had made no commitments on foreign policy or defence.

"I've been campaigning for us to leave for 30 years and this may not be perfect but it's a very big day and a big step forward.

"Of course, I've got concerns in areas but is this progress? Are we far better off than we were five years ago? Absolutely."

He continued: "Boris does his PC bit, plays up the pro-European bit.

"But the truth of it is that Brexit is the begining of the end of the European Union."

He said: "We can celebrate the fact that free from the constraints of the EU, we once again will be able to find our place in the world.

"What happens now marks the point of no return. Once we have left, we are never, ever going back… The war is over. We have won!"

12/24/2020 World News Comments Off on Nigel Farage declares Britain has WON and boasts the 'war is over' as Brexit deal is announced
Recent Posts
We and our partners use cookies on this site to improve our service, perform analytics, personalize advertising, measure advertising performance, and remember website preferences.Ok