A group of tens of thousands of Nigerian farmers and fishermen will be allowed to sue oil giant Shell in English courts after years of oil spills in the Niger Delta.

Around 50,000 people live in the Ogale and Bille communities of Nigeria and allege they have suffered systematic oil pollution for years which has impacted their drinking water supply and destroyed livelihoods.

The communities wanted to bring forward the case against the British-Dutch company in English courts because they believe they will not be able to get justice in Nigeria. The UK Supreme Court has now ruled there is an arguable case that Royal Dutch Shell and its Nigerian subsidiary are legally responsible for the pollution and that it can be brought in front of an English court.

A Shell spokesperson has called the decision “disappointing” and said sabotages are the “main sources” of pollution in the Niger Delta.

Shell did not dispute that both communities have been severely polluted, or that there has not been an adequate clean-up yet.

It had instead argued it could not be held legally responsible for the harm suffered and therefore the cases should not be heard in England.

The case is the latest to test whether multinational companies can be held accountable for the actions of their overseas subsidiaries, and could pave the way for more cases against Shell.

Two weeks ago, the Dutch Court of Appeal made a landmark ruling against Royal Dutch Shell that held it liable for pollution caused by its Nigerian subsidiary, ordering it to improve its pipeline network. 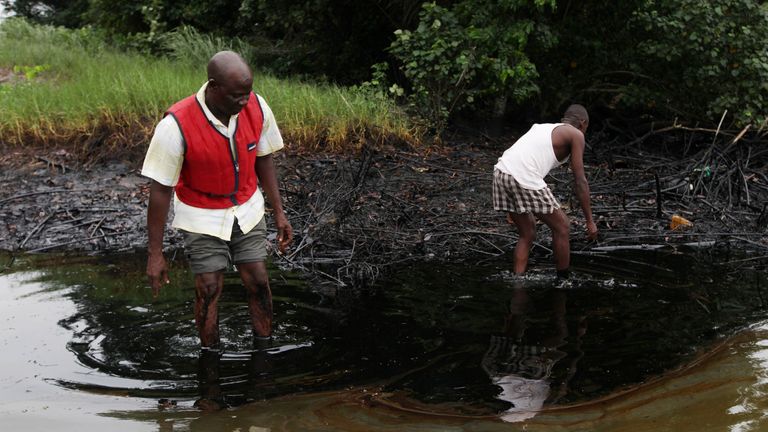 Four Nigerian farmers and Friends of the Earth Netherlands had brought forward the case.

This latest Supreme Court ruling has overturned a split decision of the Court of Appeal, ending a five-year fight by the communities to have their cases heard in the English courts.

Daniel Leader from Leigh Day, a law firm representing the Nigerian communities, said: “This Supreme Court judgment gives real hope to the people of Ogale and Bille who have been asking Shell to clean up their oil for years. We hope that now, finally, Shell will act.

“But it also represents a watershed moment in the accountability of multinational companies. Increasingly impoverished communities are seeking to hold powerful corporate actors to account and this judgment will significantly increase their ability to do so.” A Shell spokesperson said: “The spills at issue happened in communities that are heavily impacted by oil theft, illegal oil refining, and the sabotage of pipelines.

“Regardless of the cause of a spill, SPDC cleans up and remediates. It also works hard to prevent these sabotage spills, by using technology, increasing surveillance and by promoting alternative livelihoods for those who might damage pipes and equipment. Unfortunately, such criminal acts remain the main sources of pollution across the Niger Delta today.”

A similar case was brought by farmers against Shell in 2013, but it was rejected by the Dutch Hague Civil Court as it backed the oil firm’s argument that the spills were caused by sabotage and not poor maintenance.