Kim, along with his wife, Ri Sol-ju, and his sister Kim Yo-jong, watched the show, called "The Land of the People," at its premiere on Monday at the cavernous May Day Stadium in Pyongyang.

But the show's fate was quickly thrown into doubt when Kim expressed serious displeasure. 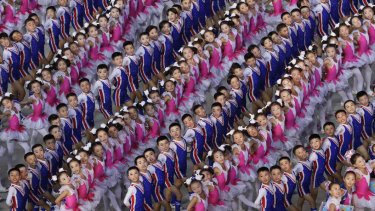 Young performers at a mass games ceremony held in Pyongyang on September 9, 2018.Credit:AP

The mass games performances, which North Korea has staged on and off for years under different names, typically feature thousands of schoolchildren and other youthful performers making synchronized moves in what is widely regarded as the biggest and most spectacular entertainment for North Korean elites.

The shows are steeped in government propaganda aimed at instilling North Koreans with national pride and loyalty to Kim's family, which has ruled the country from its beginning in 1945.

But the regime has also invited foreign tourists to the show, charging as much as $900 per person.

It has also showcased the performances before visiting foreign dignitaries, including Madeleine Albright, when she visited as the US secretary of state, and President Moon Jae-in of South Korea.

On Wednesday, Koryo Tours, a travel agency based in Beijing that takes foreign tourists to the show, said it had been told that the 2019 mass games would be "temporarily suspended from June 10 for a yet-to-be-confirmed amount of time to allow changes to be made to the performance."

It said the suspension could last "several days through to potentially a few weeks."

In reporting on Kim's attendance at the show's premiere, the North's official Korean Central News Agency said Tuesday that the leader had "seriously criticised" the creators of the current show "for their wrong spirit of creation and irresponsible work attitude, pointing to the contents and forms of the performance."

Kim then "set forth important tasks for correctly implementing the revolutionary policy of our party on literature and art," the report said.

Simon Cockerell, general manager of Koryo Tours, said he had "no idea" what elements of the show had upset Kim. A Koryo Tours employee who watched the show said that more than 50% of the performance was similar to the previous rendition, Cockerell said.

The show's suspension "must be" because of Kim's criticism, Cockerell said, although he quickly added that no one in North Korea would confirm that Kim had ordered the suspension because they were not allowed to speak on Kim's behalf.

In a Twitter posting, Young Pioneer Tours, another travel company, attributed the suspension to Kim's "dissatisfaction with the opening performance." 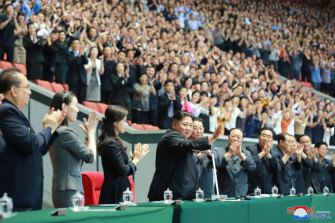 Photographs from the opening night, which were carried in North Korea's state-run news media, showed thousands of flag-waving performers. On the side of the stadium facing Kim, thousands of people held up coloured flip cards, becoming "human pixels" to create a giant slogan that said, "Long live Korea!" A smiling Kim waved at the tens of thousands of spectators.

For years, defectors from North Korea and rights activists have criticized the shows, saying children were forced to train for the performance for months.

What so disturbed Kim about the show remains a subject of wild speculation. Some news reports said that Kim might have been upset when he saw the human pixels creating his portrait alongside those of his grandfather and father, who ruled before him. All North Koreans are required to wear lapel pins bearing the images of the late Kims and to pay tribute to their statues throughout the country.

But the deification of Kim Jong Un has not yet reached that level.

Instead, Kim sent a letter in March to young propaganda officials of his ruling Workers' Party opposing the "cabalistic" treatment of the supreme leader that he said "veils the truth."

Kim's comments at the time were considered highly unusual for North Korea, where his grandfather, for instance, had been not only described as infallible but also is said to have supernatural powers, such as an ability to turn sand into rice and tree leaves into boats.

After Kim Jong Un came to power eight years ago, propagandists started to build a personality cult around him, claiming, for instance, that he has been an expert marksman since the age of 3, when he hit 20 bull's eyes in a row, according to North Korean defectors. But Kim has also appeared to project a different image from his forebears, showing no qualms about admitting to the failures of his country's economic policies.

In his letter in March, Kim said he wanted to be a leader "not disconnected from the people."

That same month, he became the first North Korean leader not to be elected to the Supreme People's Assembly, the North's rubber-stamp Parliament. Until then, whenever a parliamentary election loomed, a relay of rallies was held across North Korea to "unanimously" uphold the leader as a parliamentary member.