Singapore: Apart from the family members and friends of the prisoners he has represented, Julian McMahon knows about as well as any Australian about the grisly, heartbreaking reality of the death penalty.

The Melbourne barrister was the lawyer for Bali 9 members Andrew Chan and Myuran Sukumaran, who faced an Indonesian firing squad in 2015, and for Melbourne man Van Tuong Nguyen, who was put to death for drug trafficking by Singapore in 2005. 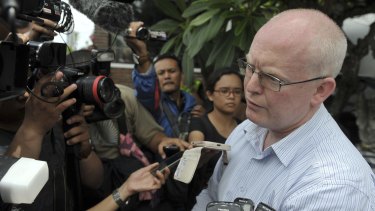 “The role of the lawyer in those circumstances is to provide steady guidance and not to be overwhelmed by the emotional horror of it all,” McMahon told The Sydney Morning Herald and The Age.

“That comes later. It’s deeply upsetting to participate in. By participating up close you see that not only is the prisoner being killed, but also his family is being destroyed. The ripple effect of an execution is to kill the prisoner, destroy the family and ultimately to harm all those involved in the process.”

The issue of capital punishment has naturally peaked in prominence in Australia over the years when Australians have been caught up in its crosshairs, most notably in those instances in Indonesia and Singapore, and in Malaysia, which executed Perth man Kevin Barlow and Brian Chambers, from Sydney, for heroin importation in 1986.

However, the case of a 34-year-old Malaysian man with “borderline intellectual functioning” being hanged by Singapore this week generated worldwide attention. 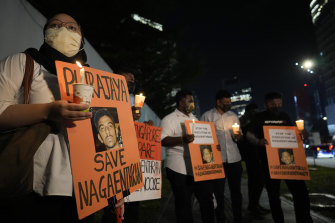 Activists in Malaysia as well as Singapore campaigned to try and spare Nagaenthran Dharmalingam from execution.Credit:AP

The body of Nagaenthran Dharmalingam was to be cremated in his home town of Ipoh in Malaysia’s Perak state on Friday afternoon, two days after his execution inside Changi prison and more than a decade after he was arrested entering Singapore with 42.72 grams of heroin strapped to his thigh and given a mandatory death sentence.

He was the second inmate to face the gallows in Singapore in the last month. Three others have received execution notices this year – all for drug offences as well – as the city state begins carrying out the death penalty again after a two-year hiatus during the COVID-19 pandemic.

The resumption of executions has thrust the spotlight back onto the hardline stance on narcotics of Singapore, which shares one of the world’s busiest land crossings with Malaysia and regards the death penalty as a core national policy, crucial to maintaining its status as one of the safest places on the planet.

The island nation is far from alone in Asia in handing out the ultimate penalty for drug trafficking.

The region is a global leader when it comes to capital punishment for drugs crimes. According to the latest report by Harm Reduction International, which assembles figures on the death penalty for drugs, there were 237 known drug-related death sentences handed down worldwide last year and more than 90 per cent of them were in south-east Asia.

Indonesia was the frontrunner with 89, followed by Vietnam with at least 87, Malaysia 15, Laos 14, Singapore 10 and Thailand two.

Yet while Singapore has resumed executions, none of its regional neighbours except Vietnam – where capital punishment is a state secret and numbers are unknown – have actually carried one out in recent years. In 2021, Indonesia went a fifth straight year without delivering one for any offence, Malaysia’s last execution was in 2017 and Thailand hasn’t put a prisoner to death for drugs since 2009, although it did execute a man by lethal injection in 2018 over a robbery resulting in death.

The war on drugs

It’s not to say that those tied up in the drugs game or linked to it have not paid the highest price at the hands of the state. The Philippines abolished the death penalty in 2006 but President Rodrigo Duterte took matters into his own hands after his election in 2016 in a so-called war on drugs that rights groups estimate has led to more than 20,000 drug-related killings by authorities and vigilante groups.

And in countries such as Indonesia, the lack of executions doesn’t equate to progress, said HRI’s human rights lead Ajeng Larasati, who is Indonesian. 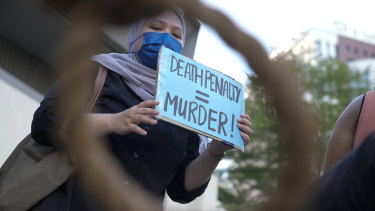 A protester outside the Singapore embassy in Kuala Lumpur last Saturday.Credit:AP

“There is a still a huge appetite [by courts] to sentence people to death for drugs in Indonesia,” she said.

In Malaysia, judges are also still prescribing the sentence despite even though they have limited discretion to opt for a life sentence and whipping rather than the death penalty for drug trafficking, under an amendment to the law passed in 2017.

Last October Hairun Jalmani, a 55-year-old single mother of nine in Sabah, was sentenced to death after being found with 113 grams of methamphetamine.

There are at least small signs things might change. A parliamentary committee is expected to this year table a further amendment to the law in Malaysia, where convictions for murder, kidnapping and drug trafficking have had mandatory death sentences.

But Dobby Chew, the Malaysia-based executive coordinator of the Anti-Death Penalty Asia Network, warns the anticipated changes fall a long way short of abolition, as had briefly been foreshadowed by then prime minister Mahathir Mohamad when won election again in 2018.

“From what we understand it’s only going to recommend that mandatory death sentences be replaced with full discretion for judges,” Chew said.

Across the Johor-Singapore Causeway, though, there is no sign anything will change.

In Singapore, drug trafficking, including for more than 15 grams of heroin, is among the offences that carries a mandatory death penalty and all but three of 60 prisoners on death row were there on narcotics offences, according to the Transformative Justice Collective, a Singaporean organisation seeking reform of the city-state’s justice system.

This week, the United Nations human rights office expressed alarm at “a rapid rise in the number of execution notices issues since the beginning of the year in Singapore”.

But Singapore authorities staunchly back the deployment of capital publishment, pointing to its deterrent effect and studies they say demonstrate support by its population. 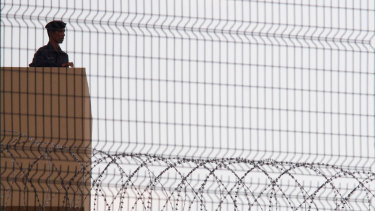 A guard keeps watch over Changi prison in Singapore, where most death row prisoners are there for drug crimes.Credit:Getty

The Herald and The Age requested an interview with Singapore Home Affairs Minister K Shanmugam on the use of the death penalty but was directed instead towards statements by the Central Narcotics Bureau and Attorney General’s Chambers defending the execution of Nagaenthran, saying he had been transporting enough heroin to “feed the addiction of 510 drug abusers for a week”.

In response to previous questions, though, the home affairs ministry said: “The death penalty is an important component of Singapore’s criminal justice system. It is applied only after due process of law and with judicial safeguards. We use capital punishment in the most limited of circumstances, to deter the most serious crimes in Singapore’s context, such as murder and drug trafficking, and this has proven effective. In so doing, the larger interest of ensuring our people’s fundamental human right to safety and security, is served.”

In parliament here last month, Shanmugum said the majority of Singaporeans believed the death penalty served as an effective deterrent against serious crimes, reading from preliminary findings of a government study.

The home affairs ministry has said there is evidence that drug traffickers had reduced the amount of drugs they transported because they knew about the death penalty and the thresholds for different drugs, pointing to reductions in the trafficking of opium and cannabis after the introduction of the mandatory death penalty in 1990 and another government study showing “severe legal consequences had limited [offenders’] trafficking behaviour”.

The deterrence argument is one that is furiously contested including by rights groups. “Based on research that has been carried out, there is no reliable evidence of the deterrent effects of the death penalty. It’s not just for drugs, it’s also for other crimes punishable by death,” Larasati said.

The way McMahon sees it, it is also ineffective on another front. It is almost never the drug kingpins themselves who are ensnared.

“The so-called zero tolerance policy only works against the easy target – the intellectually disabled or the drug addicted or the generally incompetent low-level drug mule,” he said.

“That in itself should give pause to reflect on what’s really happening because those people are constantly replaceable by an endless line of foolish or vulnerable young offenders.”

Having experienced Singapore’s system at close quarters, he added: “It is a shocking fact and aberration for a sophisticated state to maintain a mandatory death penalty, particularly for relatively minor drug offences.”

04/29/2022 World News Comments Off on ‘Not only is the prisoner killed, but his family is destroyed’
Recent Posts