President-elect Joe Biden says nothing is going to stop his administration’s progress despite President Donald Trump’s refusal to concede the race.

At a press conference in Wilmington, Delaware, on Tuesday night EST (6.30am Wednesday morning AEDT) Biden said that his transition is “well underway” and that he is reviewing potential Cabinet picks and other positions.

The continuing denial of his victory by key Republicans, including Senate majority leader Mitch McConnell “is not at much consequence in our plan and what we’re able to do between now and Jan. 20,” Biden said. 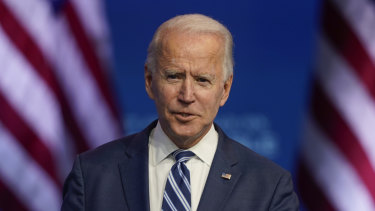 President-elect Joe Biden said Trump’s refusal to acknowledge him would not help the President’s legacy. Credit:AP

Asked by a reporter what he would say to Trump, Biden said, “Mr. President, looking forward to speaking with you.”

Biden says he thinks it is an 'embarrassment' that Trump has not conceded the election.

This marked the sharpest critique yet from the incoming president at the incumbent, as Trump’s team has refused to formally begin preparations for the transition.

Taking questions from reporters Tuesday for the first time since his victory, Biden predicted that “it will not help the president’s legacy”.

While the conference was ostensibly called to promise to defend previous president Barack Obama's affordable care act, currently being challenged by the Supreme Court, the President-elect took several questions in what became his first press conference after being declared the victor in the Presidential race three days ago.

He ruled out using law suits to get access to funding for transition, but added that it would be useful to get daily intelligence briefings

Raising unsupported claims of voter fraud, Trump has blocked Biden from receiving the intelligence briefings traditionally shared with incoming presidents, according to someone with knowledge of the situation but not authorised to disclose private conversations. 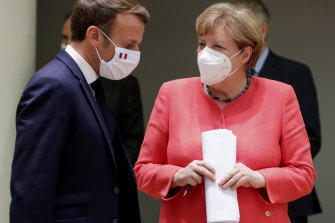 “I look forward to strengthening the partnership between our countries and to working with him on our shared priorities – from tackling climate change, to promoting democracy and building back better from the pandemic,” Johnson wrote on Twitter. “Build back better” is a slogan that Biden and the British government have in common.

Meanwhile, Biden tried to stay focused on health care as he prepares to take office on January 20 during the worst health crisis in more than a century. The US surpassed 10 million cases on Monday and cases are skyrocketing as the nation moves into the cold winter months.

Before and after Biden's afternoon speech, he was working alongside Vice President-elect Kamala Harris at a theater near his home in downtown Wilmington. He is expected to quickly name a chief of staff and start considering Cabinet appointments, though those likely won’t be finalised for weeks.

Complicating Biden's challenge is the Republican Party's widespread refusal to acknowledge his victory. With scant evidence, Trump and his allies are insisting that the election was stolen.

Understand the election result and its aftermath with expert analysis from US correspondent Matthew Knott. Sign up to The Sydney Morning Herald‘s newsletter here, The Age‘s here, Brisbane Times‘ here and WAtoday‘s here.

11/13/2020 World News Comments Off on ‘Nothing is going to stop us’: Biden calls Trump refusal ‘an embarrassment’
Recent Posts
We and our partners use cookies on this site to improve our service, perform analytics, personalize advertising, measure advertising performance, and remember website preferences.Ok