Melbourne’s city streets are emptier than ever, with a record-low number of workers commuting to their offices two months into lockdown restrictions that ordered staff to work from home.

Just 6 per cent of those who were working in the city pre-COVID did so in September, according to the latest Property Council survey to be released on Thursday. 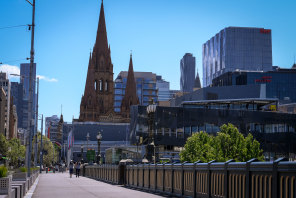 Melbourne CBD is pictured on Wednesday, deep in its sixth lockdown.Credit:Eddie Jim

The figure is down from the previous low of 7 per cent in August. In the throes of last year’s extended lockdown, occupancy only ever dropped to a monthly average of 8 per cent, according to the Property Council’s monthly survey which began in July 2020.

Occupancy rates recovered to 45 per cent of their normal mark in April and May this year, before crashing because of the fourth, fifth and sixth lockdowns.

Tuesday marked two months since Melburnians were forced to work from home again when the city was thrust into its sixth lockdown.

At the lowest point last month, just 3 per cent of office workers travelled into the city.

Seventy-seven per cent of the surveyed major commercial office landlords said they expected it would take three months or longer before a material increase in occupancy.

They said the biggest deterrent to staff returning to their desks was government restrictions, followed by the flexibility of remote working and safety fears.

Fully vaccinated workers will be allowed to return to the office once 80 per cent of Victorians have had two doses of a COVID-19 vaccine, a target expected to be met about November 5.

But the road map out of lockdown, released on September 19, urged people to still “work from home if you can”.

Danni Hunter, Victorian executive director of the Property Council, expects the recovery to be subdued this year.

“On the other side of Christmas, with vaccination rates at really high levels … we think the office return will really start to hum in January [and] February,” Ms Hunter said.

Ms Hunter wants to see vaccination and testing sites at major offices and the mandate requiring public sector workers visit their office three days a week, once it is safe to do so, reintroduced.

The CBD economy is normally dependent on office workers, with hospitality and retail desperate for their return after more days in lockdown than anywhere in the world.

An audit of 8000 shopfronts by the City of Melbourne in May found one in five were vacant or temporarily closed, and up to 40 per cent of stores in Docklands were empty.

In a report this week, councillors were told vacancies had likely increased since then, and there was a risk of “long-term decay” in parts of the city.

Lord mayor Sally Capp said the City of Melbourne was “doing everything in our power to ensure as many people as possible can enjoy hospitality, shopping and entertainment in the city” once vaccination targets were met.

“I look forward to welcoming visitors back to marvellous Melbourne and encourage everyone to get their jab – the sooner we get vaccinated, the sooner we can bring back the buzz,” Cr Capp said.