REVEALED: Minneapolis cop charged in George Floyd’s killing was hired despite having a criminal record with seven convictions and a slew of traffic violations 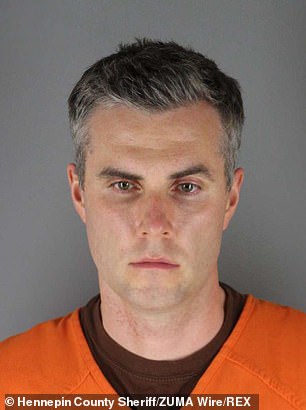 Thomas Lane, 37, is charged with aiding and abetting George Floyd’s murder. He had his own list of criminal and traffic convictions before joining the police force

One of the three former police officers charged with aiding and abetting the murder of George Floyd had a string of criminal offences and traffic violations before he became a cop.

Thomas Lane, 37, of St. Paul, was charged on Wednesday afternoon in relation to Floyd’s death, which happened when he was on his fourth full-time shift as a police officer.

Before he joined the force, Business Insider revealed that Lane had racked up a slew of traffic violations and became an officer despite having a criminal record.

Lane was convicted of seven charges in total, among them obstructing legal process and one charge of damaging property.

He had also worked a variety of jobs in the service industry before he was hired as a police officer.

Lane’s personnel file has been released by his former employer, the Minneapolis Police Department, but with many sections redacted.

His file notes that Lane left high school before graduating and then held at least ten jobs between 2010 and 2017.

During this time, he pursued his GED and a college degree as he worked as a laborer, a telemarketer, a server, a bartender, a security guard, and a sales associate.

In 2017, he began a job as a juvenile correctional officer and assistant probation officer, the file states. 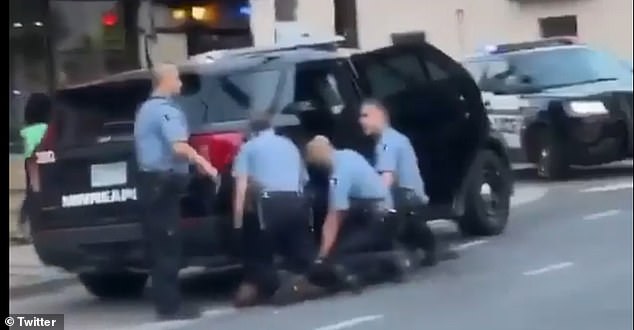 Thomas Lane is seen here to the far right holding down George Floyd’s legs during his arrest as the man said he could not breathe. This was on his fourth full day as a police officer 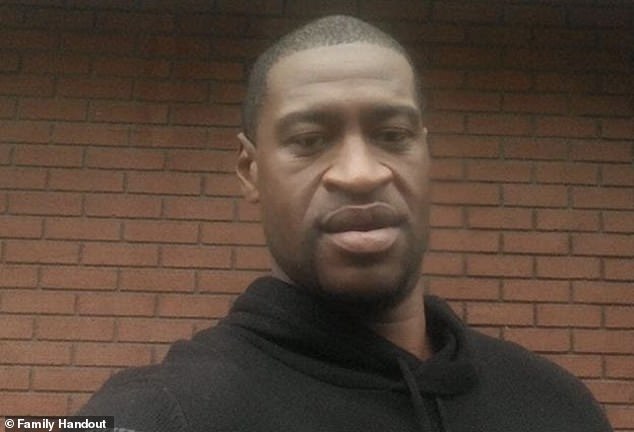 Lane is one of four former Minneapolis police officers arrested and charged with the death of George Floyd, pictured, which sparked protests across the world

The Minneapolis Star Tribune noted that Lane’s attorney on Thursday said he ‘previously worked as a juvenile counselor at a few “juvenile places” in the Twin Cities and once received a community service award from Mayor Jacob Frey and Minneapolis Police Chief Medaria Arradondo for volunteering with children’.

However, during these years Lane was also compiling a laundry list of convictions from dozens of criminal charges and traffic violations, being convicted of seven of the charges in total.

When he was 18, Lane was charged with two counts of obstructing legal process, damaging property, unlawful assembly, and disorderly conduct but details of the incident are not available.

He was convicted on two of the charges: obstructing legal process and one charge of damaging property.

Six years later, he had another run in with the law in March 2007, after throwing a party and being found guilty of hosting a noisy gathering.

Lane started as a police cadet in 2019 and was a rookie on the force, only on his fourth full-time shift, when on Memorial Day he was one of the first officers to respond to claims that George Floyd, 46, had attempted to use a counterfeit $20 bill.

During the arrest, Lane’s training officer Derek Chauvin, 44, was filmed kneeling on Floyd’s neck for almost nine minutes as he said he couldn’t breathe.

Chauvin remained on Floyd’s neck even after he had fallen unconscious and while Lane is heard asking if Floyd should be rolled onto his side, he and the other two officers present – J Alexander Kueng, 26, and Tou Thao, 34 – did not intervene. 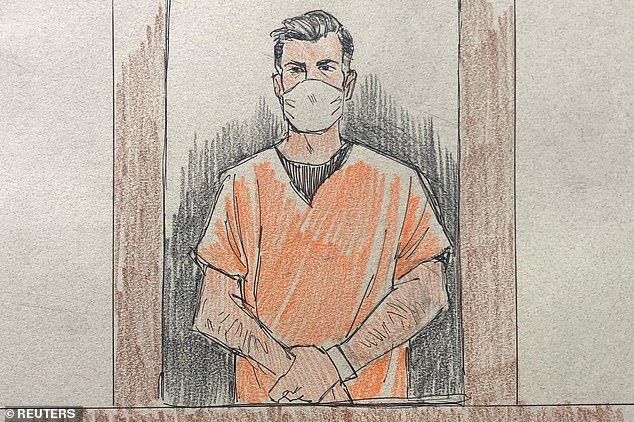 Former Minnesota police officer Thomas Lane, one of three officers charged with aiding and abetting in the murder of George Floyd, is seen in an artist’s sketch attending a court hearing on Thursday. He has an unconditional bail of $1million or $US750,000 with conditions

Derek Chauvin, pictured left, is charged with second-degree murder of George Floyd. The other three former officers, J. Alexander Kueng, Thomas Lane and Tou Thao (pictured from second left to right) have been charged with aiding and abetting Chauvin

The former cop is being held on an unconditional bail of $US1 million or $US750,000 with conditions.

In his first court appearance Thursday, Lane’s attorney argued that he was barely off probation and suggested he could do little to sway the much more senior officer Chauvin, who is charged with Floyd’s murder.

‘What was he supposed to do? Tell Chauvin to get off?’, said Lane’s attorney, Earl Grey.

Grey referred to Lane as ‘a good guy,’ and pointed to his inexperience in contrast with Chauvin’s status as a 20-year veteran.

He reminded the judge that his client had asked repeatedly, ‘Shall we roll him?’ and it was his client and his alone who got into the ambulance and attempted to resuscitate Floyd with CPR.

He requested an interim hearing and the judge noted that he was setting bail as he had done for Thao and Kueng, who had appeared in court just before him; $1million unconditional and $750,000 with conditions including that he have no contact with Floyd’s family.

However, in Lane’s case that may be reviewed pending a hearing regarding the strength of his case. 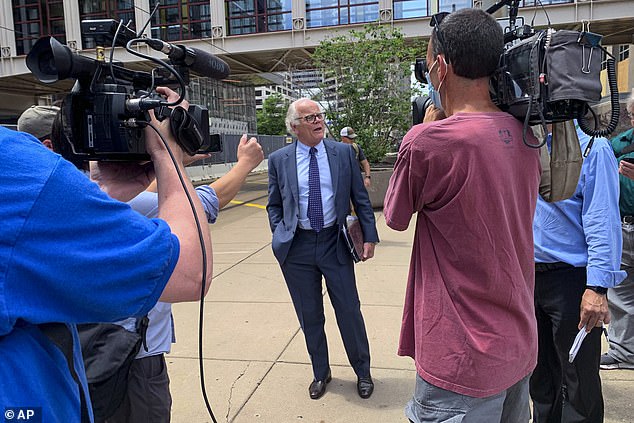 Officers Lane and Kueng were the first to arrive at the scene at 8.08pm, May 25 when someone made a 911 call reporting a man for buying merchandise from Cup Foods with a counterfeit $20.

Floyd was parked in a car just around the corner when the officers arrived. There were three people in the car, with Floyd in the driver’s seat. As Lane began speaking with Floyd through his open window, he pulled his gun and asked Floyd to show him his hands.

Floyd placed his hands on the steering wheel and Lane reholstered his gun.

The footage goes on to show Floyd complying with all the officers’ requests – getting out of the car, sitting on the ground, being handcuffed.

The probable cause statement notes that as he sat on the ground, ‘Floyd said, ‘Thank you man,’ and was calm.’ 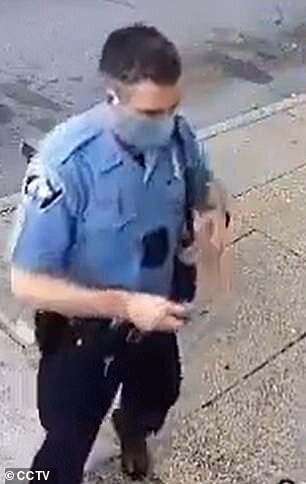 It was only when Lane stood Floyd up and tried to get him into the squad car that the man ‘stiffened’ and fell to the ground.

The statement said, ‘Mr. Floyd told the officers that he was not resisting but did not want to get in the back seat and was claustrophobic’.

Chauvin and Thao arrived in separate squad cars at this point and all four officers began trying to push Floyd into the car as he, ‘repeatedly said that he could not breathe.’

At 8.19pm Chauvin pulled Floyd from the car and he went to the ground face down. Keung had his back, Lane held his legs, Chauvin placed his knee on Floyd’s neck in an act that has reverberated around the world.

Floyd said, ‘I’m about to die,’ he repeatedly called for his ‘mama’ and said he could not breathe but they held their positions as Chauvin pressed the life out of the father of two.

After five minutes Floyd stopped moving, after six he fell silent and stopped breathing. Lane said he ‘wanted to roll him on his side.’ Kueng check his wrist and found no pulse.

Video of the death has sparked protests against police brutality around the world as some call for police forces in the United States to be defunded.

The city of Minneapolis is now looking to drastically change its police department after the incident highlighted cases of extreme force used by their offices during arrests.

On Friday, the city banned the use of chokeholds as at least five city council members voiced support for disbanding the police department entirely and creating a new system involving community support, medical workers, and social workers.

06/06/2020 World News Comments Off on One of officers charged in George Floyd's death had a criminal record
Recent Posts
We and our partners use cookies on this site to improve our service, perform analytics, personalize advertising, measure advertising performance, and remember website preferences.Ok