The former general manager of Victoria's largest Orthodox Jewish organisation is challenging her dismissal in the Supreme Court of Victoria after talks broke down with her former employer when trying to resolve the dispute through religious arbitration.

Nechama Bendet was general manager of the Jewish Yeshivah Centre in Victoria from 2002 until 2014 and then director of development until her dismissal in June 2017, after the centre was criticised in a report of case studies from the Royal Commission into Child Sexual Abuse. 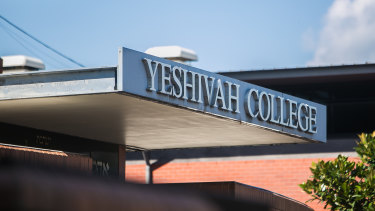 Yeshivah College is one of the Yeshivah Centre’s schools.Credit:Scott McNaughton

Mrs Bendet wants to take her former employer to a Jewish court called a Beth Din but claims the Yeshivah Centre, now the Chabad Institutions of Victoria, has resisted her contractual right to religious dispute resolution by arguing the claim should be held in the New York Beth Din rather than one in Israel.

Mrs Bendet's claim does not set out exactly what she believes was wrong with her dismissal and asks for the court to order the parties to proceed with the arbitration process, known as a Din Torah, or for the Institutions to pay her damages and interest.

The Yeshivah Centre, which runs schools, religious and community programs for Melbourne's orthodox Jewish community was criticised by the royal commission, which found: "At least until the 2000s, those in leadership positions did not report allegations of child sexual abuse to police or other civil authorities".

"In some cases, the failure of those in positions of authority to act after receiving allegations of child sexual abuse allowed perpetrators to continue to sexually abuse children."

Mrs Bendet was not named in the final report and it did not suggest she personally failed to notify authorities. She has previously denied she was aware of abuse but did not report it to police.

When Mrs Bendet left the Yeshivah Centre for unspecified reasons in 2017 she apologised "for the pain and suffering that victims of child sex abuse have experienced", telling the Australian Jewish News she hoped the reform steps Yeshivah had taken would offer comfort and recognition.

In a document filed with the Supreme Court of Victoria on September 2, Mrs Bendet asks the court to uphold what she says is a right written into her contract to have any disputes resolved according to the customs of the Chabad sect of Judaism.

Mrs Bendet's lawyers say she has been trying to have the Beth Din resolve the dispute since 2018. A Beth Din is comprised of three judges called borer, one chosen by each party and a third selected by the first two.

Mrs Bendet's representatives allege the Chabad Institutions first disagreed with her choice of borer on "spurious grounds", then reneged on an agreement to use the Israeli Beth Din, then nominated a borer who would not come to Melbourne. Finally, Mrs Bendet claims, the Institutions have not co-operated on scheduling the process since September last year.

Yossi Gestetner, a member of the Chabad Institutions board, said: "We have not been served with any court documents and consequently it would be inappropriate to comment at this time."

Mrs Bendet's lawyers were repeatedly contacted for comment by email and phone but did not respond.

The most important news, analysis and insights delivered to your inbox at the start and end of each day. Sign up to The Sydney Morning Herald’s newsletter here and The Age’s newsletter here.