Have YOU had a bad experience on a flight?

A first-class passenger who was left ‘horrified’ at the ‘unacceptable’ conditions on a £4,000 return British Airways flight is urging travellers to fly with other airlines.

Jarvis Marcos, 37, was flying first-class from Mexico to London with his girlfriend, Kamara Harding, 33, when he experienced the ‘shockingly bad’ standards – which included dripping water from the air-con and ‘sticky liquid’ on tray tables.

Unimpressed Mr Marcos called the 11-hour round-trip the ‘worst experience’ he’s ever had on a plane after he boarded the jet back in August.

Posting a video of his experience on his TikTok account, Mr Marcos mocked British Airways and compared the air-con leak to the ‘onboard showers’ on Emirates planes.

The luxury traveller, who flies upwards of 100,000 miles a year, runs a luxury travel review website and travel agency – and flies in first or business class reviewing airlines and hotels.

However, Mr Marcos was left particularly disgusted at the ‘stale’ and ‘overcooked’ in-flights meals and unclean seats, which he called ‘unacceptable’ following the Covid-19 pandemic.

In addition, the metal framework of his seat was visible through the padding and it didn’t recline fully into a bed due to an apparent malfunction. 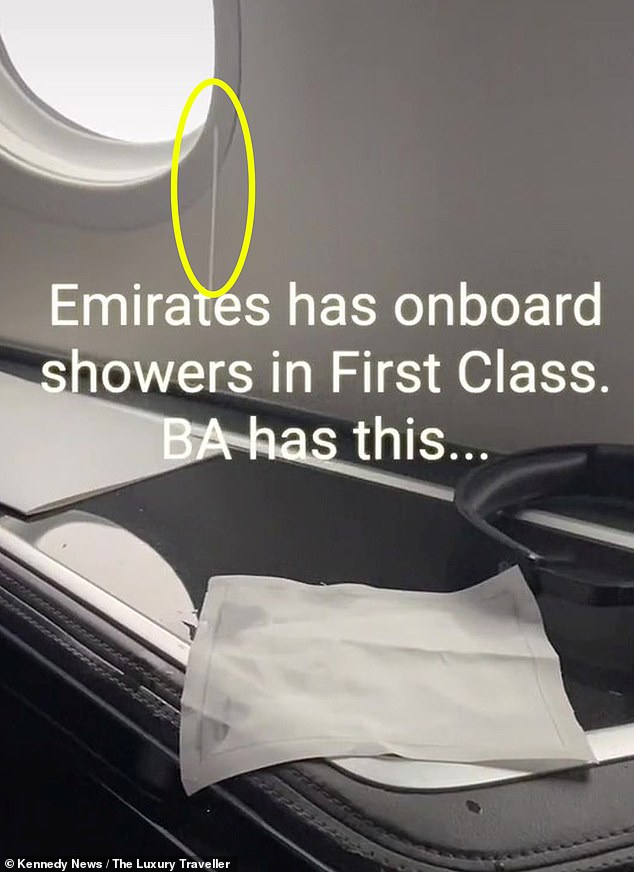 ‘Horrified’ luxury passenger has vowed to boycott British Airways after sharing ‘unacceptable’ footage of conditions on a £4,000 first-class flight 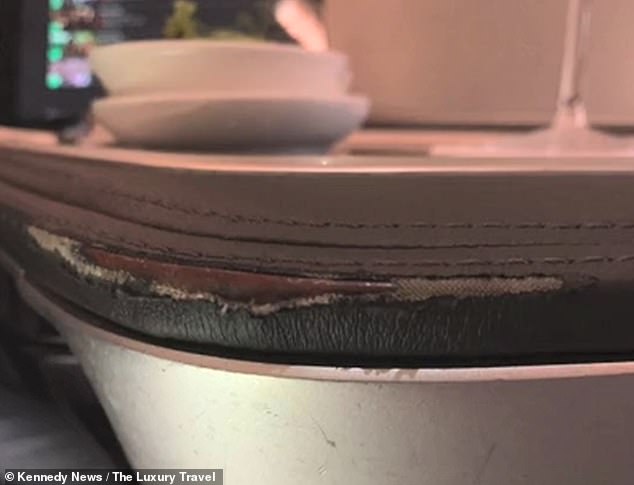 He experienced the ‘shockingly bad’ standards during the 11-hour round-trip, which included dripping water from the air-con and ‘sticky liquid’ on unclean tray tables 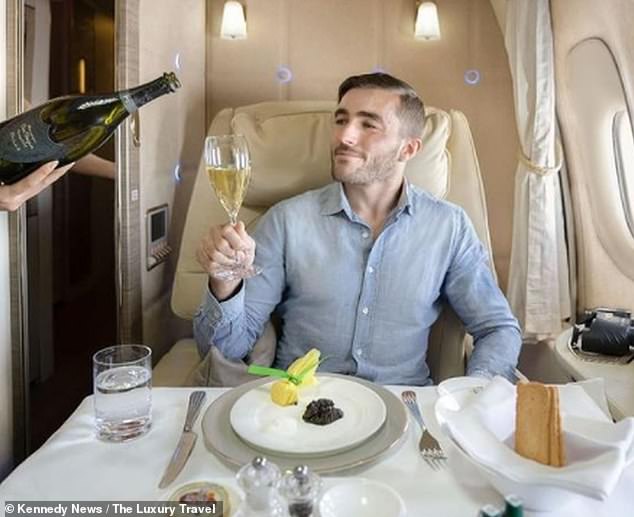 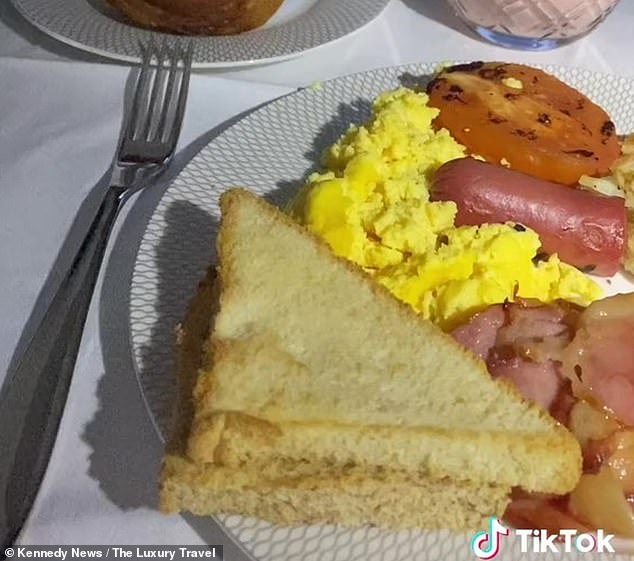 He called the food ‘overcooked’ and ‘stale’, and was stunned when the airline offered him just £150 per person voucher as compensation 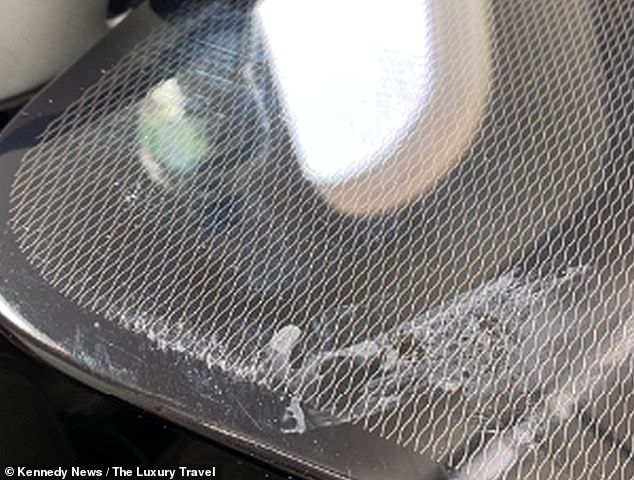 Unimpressed Mr Marcos claimed the tray tables (Pictured) were not cleaned properly and were left with a sticky residue, which he found particularly worrying given the ongoing Covid-19 pandemic

Mr Marcos claimed the journey would have cost £4,000 without his air miles and he was left stunned when the airline offered £150 per person e-vouchers to him and his girlfriend – stating they’d dealt with the case ‘fairly and appropriately’ and wouldn’t be offering further compensation.

On social media, Mr Marcos juxtaposed his BA video with footage of his first class flights on Emirates to show off the difference in quality – including bottles of Dom Perignon champagne and ‘mounds of caviar’.

Following his experience, he is now urging other people to choose a different airline for their first-class travel. 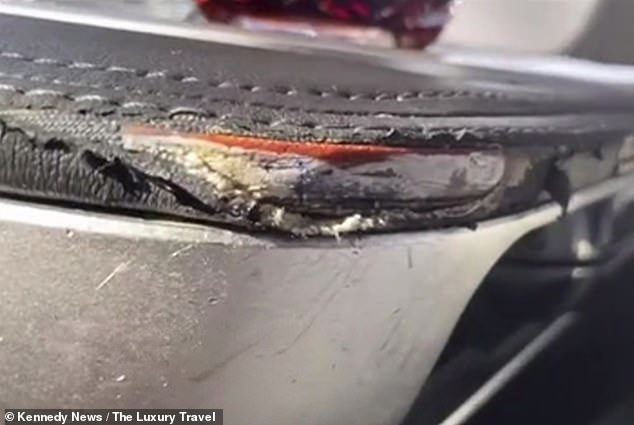 Mr Marcos took pictures of the ripped seats (Above) and was left stunned by hefty £4,000 price tag that British Airways are charging customers for the ‘appalling’ conditions 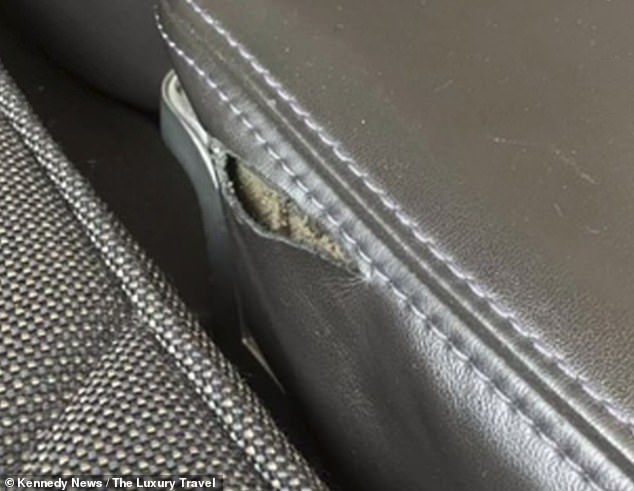 British Airways apologised and said their aircraft goes for maintenance on a regular basis and they are investigating why Mr Marcos’s experience ‘clearly didn’t meet their usual high standards on this occasion’.

Mr Marcos, from West London, said: ‘There were large gouges missing out of the seat itself and the surrounding of the seat.

‘Chunks of leather had been gouged out to the point where you could see the metal skeleton of the seat underneath.

‘The seat also didn’t fully recline into a bed despite that being something they advertise as part of the service, because the mechanics of the seat were broken.

‘The seats also clearly hadn’t been cleaned, which especially during covid is just not acceptable.

‘There were crumbs in the storage cubby holes and streaks of a sticky liquid on the tray tables which had dried on and not been cleaned.

‘The air conditioning above my girlfriend’s seat was leaking and dripping water onto her which is also particularly unacceptable during Covid, as that’s what filters the air.’ 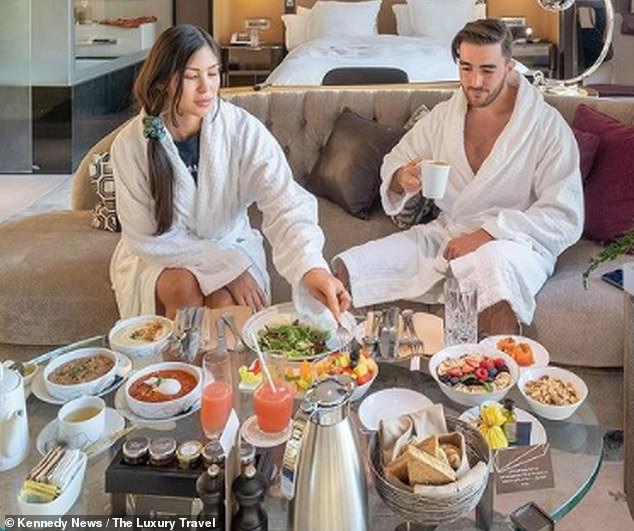 Mr Marcos, 37, (Right) was flying first-class from Mexico to London with his girlfriend, Kamara Harding, 33, (Left) on the British Airways flight

The luxury traveller has visited 61 countries in his travels while experiencing and reviewing a range of first-class cabins and resorts.

He claimed that British Airways have always been ‘bottom of the barrel’ when it comes to the first-class flight experience compared to other airlines.

But he said nothing could have prepared him for the ‘state of disrepair’ of this particular plane as well as the overall ‘let-down’ service.

He claimed the ‘broken-down’ plane is nothing like the luxury advertised by the flight giant and is urging travellers to fly with other airlines.

In addition, Mr Marcos claimed the food wasn’t up to scratch, being ‘stale, swimming in oil and thoroughly overcooked’ despite the hefty price tag. 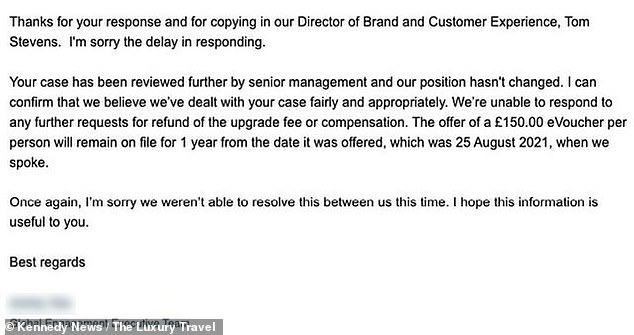 He added: ‘BA always seems one of the worst airlines when it comes to first and business class – the bottom of the barrel.

‘It’s just the Dreamliners that have this problem and BA said they are aware of an issue with the seats.

‘They offered me £150 per person as compensation for all of the issues we had which implies that that experience was only £150 away from the ideal experience that BA would hope you would have.

‘It’s unacceptable. There’s no reason why a paying customer in any cabin should expect a seat that isn’t clean or has air conditioning dripping on them.

‘What makes it particularly bad is that first class is advertised as being this supremely luxurious experience but that’s not true.’

After posting about his experience online, Mr Marcos said he received messages from other fellow first-class travellers and friends who claim to have had similar issues with British Airways flights.

One former passenger even said he’d sat in the exact seat shown in his TikTok video back in January, suggesting passengers have been experiencing the same ‘state of disrepair’ for at least seven months.

The luxury traveller now vows to fly with other first-class carriers wherever possible and to advise clients of his to avoid British Airways, particularly for special trips.

He added: ‘I have to look at it from the view of potential clients who could be on a once-in-a-lifetime trip like their honeymoon.

Have YOU had a bad experience on a flight?

‘The thought of somebody saving up all of their money and spending it on BA is horrifying.

British Airways said the health and safety of their customers was their top priority and that their aircraft go for maintenance on a regular basis, while they have invested £6.5billion in their fleet, inflight cabin product and catering.

A spokesperson for British Airways said: ‘We’ve apologised to Mr Marcos and are investigating what went wrong, as his experience clearly didn’t meet our usual high standards on this occasion.’