A Perth mother of three – including an infant – says she and her family have been stranded at London’s Heathrow airport for three days after being bumped off flights in favour of business class travellers due to Australia’s caps on international arrivals. 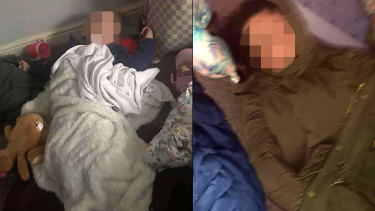 The family has been stranded at Heathrow Airport for three days, the mother-of-three said.Credit:Facebook

Sheree Richardson took to social media on Saturday, posting images of her children sleeping on the airport floor covered in winter coats.

“Homeless now at Heathrow with three children. Have been for three days and watch people paying for business class tickets right in front of me!! 14, 11 and 1 year old it’s not right,” the post, which has garnered hundreds of comments, reads.

She said she booked their flights before international arrivals caps were introduced.

Qatar Airlines told this masthead on Wednesday that the Richardson family was now booked on flights home next week, travelling on September 16 and 17.

“Due to the restrictions on passengers travelling to Australian destinations, Qatar Airways can only carry a limited number of passengers per day to certain destinations," a spokeswoman for the airline said.

She said selection for a flight was based on a range of criteria, including compassionate and medical requirements, and each passenger's case was treated on an individual basis regardless of the passenger class they had booked.

There have been reports of thousands of Australians finding themselves stranded overseas because they couldn't get on flights home, and the airline industry says the caps make flights logistically more difficult and commercially less viable.

Airlines have been criticised for cancelling flights at the last minute and bumping passengers from economy, insisting they pay for business class seats if they want to get on the flight. 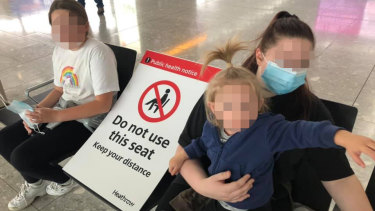 The children aged 14, 11 and one were forced to sleep on the floor.Credit:Facebook

“This is obviously extremely troubling and no Australian should – or need be – in this position,” he tweeted on Sunday.

“If the individual has access to email, please ask that they email [email protected] If not, please DM the details and we’ll look into it urgently.”

On Monday the Australian High Commission in the UK deployed a support team to Heathrow Airport.

"They're helping to facilitate Australians returning home, and will deliver support in the event of disruption. It’s tough to head home right now: but we’re determined to help and support however we can," the Commission's Facebook post read.

It is understood the family have been moved to a hotel.

In reply to her supporters on social media on Sunday, Ms Richardson said she had not received any offers of help from the federal government.

She said she and her children were “safe” until Monday, when she was told she would hear back from the Australian High Commission.

Supporters were outraged, flooding Ms Richardson's Facebook post to voice their dismay over the government's lack of action.

“This is so wrong on so many levels! Where is your compassion and duty to Australians stranded overseas Prime Minister of Australia,” one poster said.

“I'm so sorry, I never imagined Australia would treat our citizens this way. I'm appalled. Bring our fellow Aussies home,” another said.

The Morrison government, in recent weeks, has been pushing state governments to lift caps on international arrivals and expand the capacity of their hotel quarantine systems to help repatriate stranded Australians.

In Western Australia, international arrivals remain capped at 525 a week or about 75 a day.

Ms Richardson has not responded to requests for comment.

A spokesperson for the Department of Foreign Affairs and Trade said while they would not comment on individual cases the Australian consular officials around the world were doing all they could to assist Australians overseas and referred to emergency loans available for vulnerable citizens.

09/09/2020 World News Comments Off on Perth family, including infant, ‘stranded at London airport for days’
Recent Posts
We and our partners use cookies on this site to improve our service, perform analytics, personalize advertising, measure advertising performance, and remember website preferences.Ok