A Covid-19 vaccine made by the pharmaceutical company Pfizer has passed safety and effectiveness tests in early clinical trials, a study revealed today.

The jab, of which the UK Government has ordered 30million doses, is now another promising candidate for the vaccine considered so crucial to stopping the virus.

Early human trials of the injection, carried out by New York-based Pfizer and universities and hospitals in the US, have produced promising results.

People who received the vaccine produced immune responses on par with – or better than – those who had actually had coronavirus in the past.

And no dangerous side effects were reported among the 36 adults who received the jab in the tests, who most commonly complained of headache and tiredness.

Pfizer’s attempt to make a vaccine, which it has called BNT162b1, is the latest in a line of hopeful trial results, with Britain’s own vaccines made by Oxford University and Imperial College London also showing early signs of success in human testing.

Russia’s Government yesterday became the first in the world to officially register a vaccine but scientists were sceptical because the jab had been tested on fewer than 40 people and no data is publicly available to see if it works or is safe. 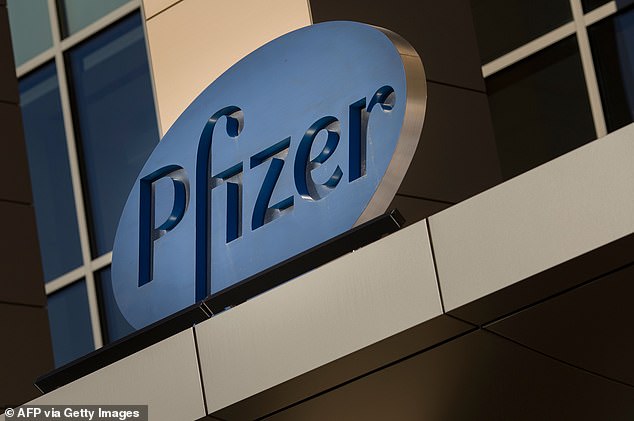 New York-based Pfizer, in conjunction with hospitals and universities in the US, tested its jab on 36 volunteers and found an immune response on par with people who had actually had coronavirus

The results of a first phase trial of Pfizer’s vaccine were published in the prestigious science journal Nature today.

Researchers, who included Pfizer staff, said the vaccine had successfully produced an immune response in the bodies of the people it was given to.

The purpose of the jab is to trick the immune system into thinking it is infected with the coronavirus, effectively training it how to fight it off without someone actually being sick.

Forty-five adults aged 18 to 55 were involved in the trial and given a jab of 10 micrograms, 30 micrograms or 100 micrograms, or a placebo.

Researchers found the immune response was much stronger in the 30 microgram group than in the 10.

However, there were no notable differences in immune response between the 30 and 100 groups after one dose – and the 100 micogram group suffered more side effects.

In the trial the scientists reported that the levels of antibodies – substances used by the immune system to fight illness – in the participants was on par with people who had actually fought off the real coronavirus, or up to four times higher in some.

While the former patients’ blood contained an average of 602 units per millilitre after two weeks, vaccine recipients had between 534 and 1,778 U/mL after three weeks.

Although immunity to Covid-19 is still unclear, having more antibodies generally means someone is better equipped to fend off the illness.

The researchers wrote: ‘Robust immunogenicity was observed after vaccination with BNT162b1.’

They added: ‘The clinical findings for the BNT162b1 RNA-based vaccine candidate are encouraging and strongly support accelerated clinical development, including efficacy testing, and at-risk manufacturing to maximise the opportunity for the rapid production of a Sars-CoV-2 vaccine to prevent Covid-19.’

Pfizer’s jab is a type of vaccine called a lipid nanoparticle vaccine, meaning genetic material linked to the coronavirus is transported into the body inside a bubble made of lipids, which are fatty molecules.

These are synthetic which makes them easy to produce en masse, whereas other types of vaccine can use different viruses or parts of the coronavirus itself to transport the genetic material (RNA).

Once the RNA is inside the body it triggers the immune system to react in the same way that it would if someone was genuinely infected with Covid-19.

This can sometimes cause side effects – discovering these is one of the main purposes of clinical trials.

Some people who received the jab also suffered from ‘mild to moderate fatigue’ and headaches in the week after the jab. Some also had chills muscle pain and joint pain which people in the placebo group didn’t have.

The paper comes after Russia yesterday revealed that its authorities have approved a vaccine being made in the country, and that President Vladimir Putin’s own daughter has taken it.

But scientists are sceptical and said the jab has only been tried on around 40 people and that there is no public data to suggest it works.

Russia has made the vaccine race a matter of national prestige and named the product ‘Sputnik V’ after the former Soviet space satellites, prompting fears that safety will be compromised for the sake of Russia’s image.

Scientists yesterday criticised Putin for the ‘reckless and foolish’ move which they say could make the pandemic worse if the vaccine proves dangerous or ineffective.

While Putin said his daughter had suffered no side effects worse than a high temperature, news agency Fontanka claimed there were a long list of ‘adverse events’ (AEs) which occurred ‘frequently and very often’.

‘It is not possible to more accurately determine the incidence of AEs due to the limited sample of study participants,’ said the Gamaleya Research Institute which produced the vaccine.

The vaccine was approved after just 42 days of testing on 38 people, it reported.

WHAT ARE THE LEADING COVID-19 VACCINE CANDIDATES?

Human trials started on April 23 and they are now in the final phase, with trials being carried out in the UK, Brazil and South Africa.

Lead of the project Professor Sarah Gilbert told The Times she is ’80 per cent’ confident of its success.

The science behind Oxford’s vaccine attempt hinges on recreating the ‘spike’ proteins that are found all over the outside of the Covid-19 viruses.

It is made from a weakened version of an adenovirus from chimpanzees that has been genetically changed so it is impossible for it to grow in humans.

Fifteen volunteers have already been given Imperial’s trial jab and testing is expected to ramp up to include as many as 200-300 participants in the coming weeks. A second trial, with 6,000 people, will come later.

But Professor Robin Shattock, lead researcher, said the vaccine won’t be available until at least 2021 even if everything goes according to plan.

If the jab works, the team want to make it as cheap as possible so the entire British population could be vaccinated for the ‘really good value’ of just under £200million.

Imperial’s vaccine also attempts to mimic the spikes on the outside of the Covid-19 virus. However, it will work by delivering genetic material (RNA) from the virus, which programs cells inside the patient’s body to recreate the spike proteins.

US drug giant Pfizer — famous for Viagra — and German firm BioNTech have been working on a number of potential Covid-19 vaccines under the ‘BNT162 program’.

It reported positive preliminary results from the ongoing Phase I/II clinical trial of one called BNT162b1 on July 1. Tests on 24 volunteers showed that it was well tolerated and produced dose dependent immunity.

Dr Kathrin Jansen, Pfizer’s head of vaccine research and development, said the vaccine ‘is able to produce neutralizing antibody responses in humans at or above the levels observed’ in Covid-19 survivors.

Pfizer received fast track designation from the US Food and Drug Administration (FDA) for two of their four potential Covid-19 vaccines this month.

The vaccine is one which injects RNA – genetic material – which codes the body to produce proteins that look like the spike proteins that would be found on the outside of the real coronavirus.

French firm Valneva have yet to begin human trials of their Covid-19 vaccine, called VLA2001. Company bosses hope to scale up testing by the end of this year.

The jab is currently only in pre-clinical studies — meaning it is being tested in the lab and on animals.

If proven successful, the vaccine will be manufactured at its facilities in Livingston, Scotland and in Solna, Sweden.

Valneva’s jab is based on injecting people with dead versions of the coronavirus.

This is called an inactivated whole virus vaccine and works by injecting the virus itself but versions that have been damaged in a lab so that they cannot infect human cells. They can be damaged using heat, chemicals or radiation.

Even though the viruses are inactivated the body still recognises them as threats and mounts and immune response against them which can develop immunity.

Massachusetts-based Moderna was the first US company to start human trials of its potential Covid-19 vaccine, known as mRNA-1273, on March 16.

The jab has proven to trigger an immune response in all 45 injected volunteers, according to a study published in the prestigious New England Journal of Medicine on July 14.

Moderna’s shot showed early promise in its phase 2 human tests last month. The company reported that it triggered antibody production on par with that seen in recovered coronavirus patients.

Chinese vaccine Ad5-nCoV, made by CanSino, was the very first shot to enter clinical trials earlier this year and is a leading candidate.

A trial of 108 healthy volunteers in China showed it safely triggered an immune response in participants.

Results published May 22 in The Lancet showed most of the people dosed with the vaccine had immune responses, although their levels of antibodies thought to neutralize the virus were relatively low. Researchers saw a stronger ramp-up of other immune compounds, called T-cells, that might also help fight the infection off.

The drug giant started work on the vaccine in January, two months before Covid-19 was labelled a global pandemic.

A vaccine trial spearheaded by Johnson and Johnson will start recruiting people in September, with clinical data available by the end of the year.

An ’emergency use’ batch of the vaccine is anticipated to be authorised as early as 2021, which would likely be prioritised for vulnerable people.

The vaccine, named CVnCoV, works by injected RNA designed to force the production of coronavirus-like proteins in the body and trigger an immune response.

The first trials will involved 168 people between the ages of 18 and 60 in Germany and Belgium.

08/12/2020 World News Comments Off on Pfizer's Covid-19 vaccine shows promising results in early study
Recent Posts
We and our partners use cookies on this site to improve our service, perform analytics, personalize advertising, measure advertising performance, and remember website preferences.Ok