‘He was the hero of our holiday’: Passengers hail pilot who was pictured helping to load luggage onto his plane after their flight from Manchester to Crete was delayed by more than a day

A hero pilot saved hundreds of holidays by getting out of his cockpit and loading luggage on to his plane that was delayed by 32 hours.

Passengers watched as the pilot, known only as Simon, rushed to help staff at Manchester Airport after the flight was finally given a 40- minute window to take off.

Katherine Cox, who was among those travelling from Manchester to Crete, said the pilot was the ‘hero of our holiday’. 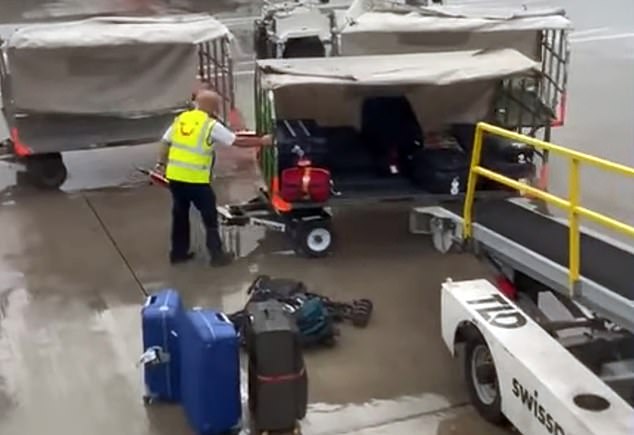 A hero pilot, known only as Simon, saved hundreds of holidays by getting out of his cockpit and loading luggage on to his plane that was delayed by 32 hours at Manchester Airport

But it comes as it was revealed that senior executives at Tui enjoyed ‘workations’ in the run up to this week’s chaos. The firm allowed members of its head office to log on abroad to improve their ‘work-life balance’.

Andrew Willis, the head of talent acquisition and workforce management, said that he had ‘plenty of time’ to enjoy his all-inclusive Tui hotel in Ibiza while working poolside, The Daily Telegraph reported.

Tui said: ‘We’re proud of the flexible ways of working we offer our colleagues.’

She said the pilot had told those on the flight that the crew were doing everything in their power to ensure the flight took off.

‘He said, ‘Even my co-pilot is loading bags’,’ Mrs Cook, from Warrington Cheshire, revealed.

‘We looked out of the window and there he was. The next thing we knew we were taxiing to the runway. We were all cheering. Simon had gone above and beyond.’

Mrs Cook, who was travelling with her husband and daughters, added that the pilot should be ‘recognised’ Tui for his work.