Bars and restaurants will continue seating diners on top of parking spaces permanently in Melbourne’s bustling inner-north under a plan being devised by Yarra City Council.

The council will next week vote on a temporary extension of the ‘parklet’ program — initially designed to help the hospitality industry survive COVID-19 — from the end of June until October 31. 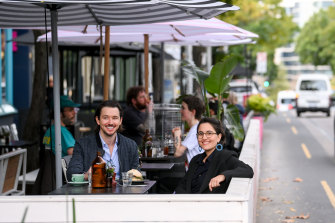 As part of the scheme, traders would be asked to pay a daily fee for taking up a parking space on hospitality strips such as Brunswick, Smith and Gertrude streets if the four-month extension is supported by the Greens-led council at next week’s meeting.

Parklets are expected to remain forever, with the extension considered a test-run for winter before a permanent proposal comes back to councillors later in the year.

Councils are having the same debates all over Melbourne, with the City of Melbourne calculating a fee to be introduced from July 1.

Yarra mayor Gabrielle de Vietri said the program had transformed the city and charging a small fee would make it sustainable.

“The difference to our street is just so palpable,” she said. “It’s so exciting and vibrant and bustling when you walk down the street.”

The fee structure would be split into three tiers, with traders on busy streets paying $15.92 a day per parking bay. Bars and cafes on intermediate streets such as Wellington and Peel streets would pay $10.45 a day, compared to $8.40 per parking space per day on neighbourhood streets.

Many parklets take up more than one parking space.

An application fee of $275 will also be introduced to cover administration and inspections, although it’s not expected to cover all the costs to council. 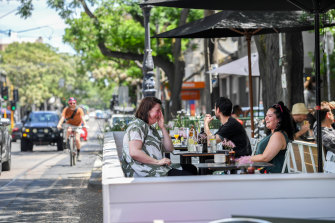 The parklet out the front of Archie’s All Day cafe in Gertrude Street in November last year.Credit:Joe Armao

The initiative, part funded with a $500,000 grant from the Victorian government, has the support of the community, according to a council survey of 3080 residents that found 75 per cent of people wanted outdoor dining to remain year-round, while 20 per cent wanted the fixtures to pop up during summer only.

Victoria Police, the Metropolitan Fire Brigade, Melbourne Water and Yarra Trams have flagged some concerns about on-street dining that need to be factored into plans and designs, including that some parklets had added to overcrowding and congestion.

The council said it would consult Yarra Trams and other groups to make sure that permanent structures, such as covers above parklets, did not disrupt the work of other agencies.

Gertrude Street resident Peter ‘PK’ Kaylor, who has been leading a local campaign to reinvigorate the precinct, argued outdoor dining brought in more customers for all traders than a parking space ever could and hoped bars and restaurants would hold onto parklets despite winter.

“I’ve seen the value added to the street, and we’ve seen how much more interesting it makes the street than just parked cars,” he said.

Seventy-one per cent of business owners without parklets thought they created a good vibe and 54 per cent of them thought parklets were a better use of public space than parking bays.

Currently, 107 parklets are seating customers in Yarra and most businesses said they were willing to pay at least $500 a month to keep them.

Overwhelmingly, residents said finding a parking space had not become an issue as a result.

Cr de Vietri said introducing a fee would also make the system fairer for hospitality traders who had been unable to take up parking spaces.

The extension will be available only to those who currently have a parklet, to allow council to gear up for summer and devise a permanent plan and structural requirements.

Traders will be able to leave the extension at any time if they decide it’s not worth it for them once COVID-19 density restrictions ease or if it doesn’t work for them in winter, but council is expecting a strong uptake.

From July 1, fees will return for dining on footpaths around the City of Yarra.