A TikTok account posted a short clip on the video sharing site of the officer, out on patrol in London’s Piccadilly Circus, along with a message urging followers to identify her so he could get a date.

The footage, filmed on January 3 and uploaded by Luciano69969, was posted with the caption: ‘Tik Tok help me find this girl she sooo fine.’

A whistle can then be heard as someone shouts ‘Oh my Goodness!’ at the woman.

It follows a trend of similar videos on the popular social media site, drawing condemnation from the Metropolitan Police.

‘No woman, whether a police officer or not, should be made to feel uncomfortable by this sort of behaviour.

‘My officers were deployed on New Year’s Eve, one of the most challenging days in the policing calendar.

‘I am proud of the way they stayed focussed and professional in the face of such provocation.

‘This female officer was working hard to keep the people of London safe, she deserved more respect.’

‘It is never acceptable for someone to be abused or harassed for doing their job.’

In the video, a female police officer can be seen looking annoyed at the man filming her as a voice-over asks people to help track her down.

Another female colleague then tugs at the officer’s arm and leads her away from the group of cackling men.

A yob can then be heard wolf-whistling at the officer as she walks away exclaiming ‘Oh my goodness’.

The disturbing video was filmed on January 3 in Piccadilly Circus and has racked up over 230,000 views.

It comes against a disturbing background of increased harassment of female police officers.

Similar disrespectful stunts have become so prevalent on TikTok that some have been included in a round-up video.

It’s captioned ‘Roadmen flirt with female police officers’ – followed by a laughing emoji – and it has been viewed over 662,000 times.

It shows men asking women PCs for their numbers and names – with one woman dubbed PC Lip Filler by the filmer.

Fellow social media users hit out at this latest video, with some followers saying the man was treating the officer ‘like a piece of meat’.

Another added: ‘I’m sure the wolf whistle really made her warm to you – even in the 70s this was pretty uncool. If I was her I would have pepper-sprayed you in the eyes.’ 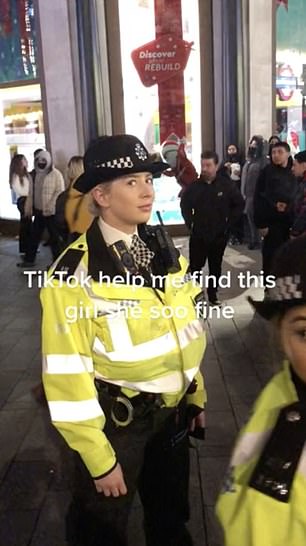 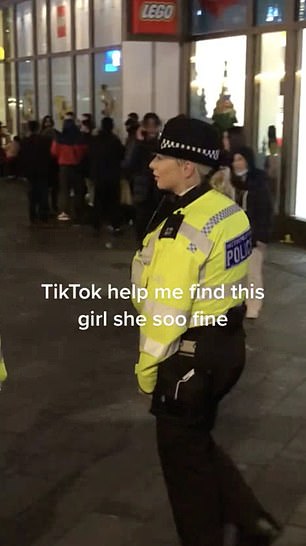 In the video, a female police officer can be seen looking annoyed at the man filming her as a voice-over asks people to help track her down 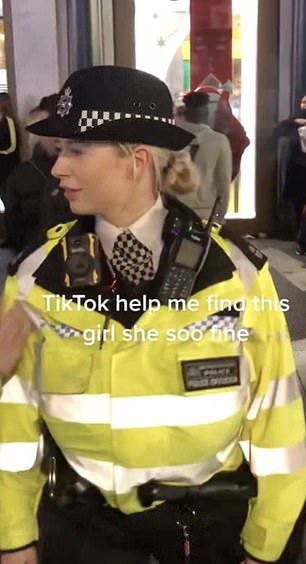 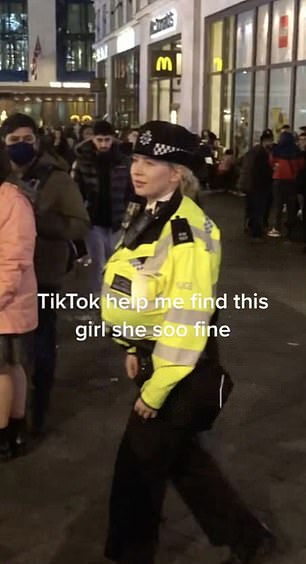 Speaking last month, when the trend first erupted, Ch Supt Raj Kohli of Hants Police said: ‘The objectification of women is a real problem for society.

‘The misogyny and sexism on display here is part of the spectrum that leads to violence against women and girls.

‘Furthermore, focusing on colleagues who are here to keep people safe is unacceptable.

‘Those people recording these videos should take a hard look at themselves.

‘How would they feel if it was their female relative being so disrespectfully treated?’

A Police Federation spokesman said: ‘Not only is this deeply disrespectful to female officers, but incredibly worrying should this harassment happen at a time where they may be on duty, investigating a serious crime or when other members of the public may need their help.

‘It also poses a potential risk to their personal privacy which should be respected at their place of work.’

In an Independent Commission on Policing report in 2013, nearly a quarter of the women interviewed reported experiencing harassment on the grounds of their gender.

And according to a 2013 survey, almost a quarter of female police officers in England and Wales said they had been subject to sexual harassment.