Ever since Lady Godiva rode buck naked through Coventry to protest about taxes people have drawn attention to themselves for a cause.

So imagine if way back when, they had invented the mobile phone instead of the wheel.

Lady Godiva (#LG-on-the-Pony) would have been a social influencer promoting hair products and home wax kits.

Ned Kelly would have taken a selfie on the gallows (#suchislife). Imagine the T-shirt sales!

The captain of the Titanic could have been a craft beer promoter. (Icy cold – going down smooth.)

Today we have a ragtag group that for some reason whenever they are approached by police go to their phone, not to call a lawyer but to prepare a YouTube clip. 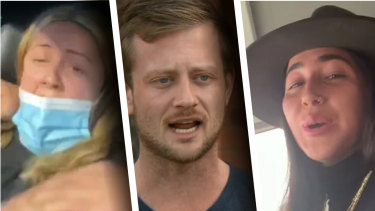 Victorians who have filmed their encounters with police and then posted the videos online.Credit:Jamie Brown

We've just had the lady dragged from her car kicking and screaming after she refused to provide police with her name and address.

She posted an edited version of the confrontation to prove she was the victim of police brutality. She did not mention the piece of paper she was holding, or why her phone was set on video. She did not post the original interaction that led to the arrest. 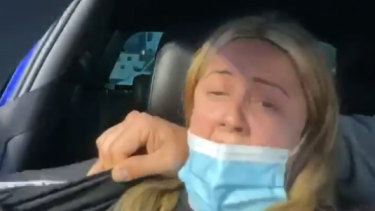 A screenshot of Natalie Bonett’s video, where police are seen removing her from her car at a Wallan checkpoint. Credit:Facebook

Police say she repeatedly refused a lawful request. She failed to comply and she was arrested. That's how it works. The alternative was to let her go to avoid a fuss, which would put her above the law.

The other day we had the man who wouldn't come down from his first-storey balcony when police arrived with a search warrant.

He may have been flushed with success. A few weeks earlier he had refused to comply with police at a checkpoint and, amazingly, was allowed to continue on his journey in an unregistered car. That was just embarrassing and contributed to a change in police policy.

Senior police have made it clear. They will not engage with the deniers who just want footage. They will make the arrest and those people can have their say in court.

This time, "first-storey man" wanted a debate for his YouTube story. He seemed unaware police tactics have changed.

By the time he had second thoughts, the police had used a battering ram to end both the discussion and his front door.

When the lady bluffed her way through a police checkpoint, laughing in triumph there was outrage.

When police refuse to negotiate, other people are outraged.

There was some right-wing commentator on TV who likened police dragging the woman from her car as "terrorism". One can only assume he had raided all the red lolly snacks in the make-up room to become so over-excited.

These are the exact same critics who say courts aren't tough enough and police should go harder on street gangs and other assorted lawbreakers.

These are the same people who say police should have arrested everyone at the Black Lives Matter demonstration, which did not take place during the present state of disaster.

These critics are actually criticising the laws police are enforcing. That is perfectly fair – such draconian laws should be scrutinised – but you cannot expect police to say, "I don't like that law I'm going to ignore it."

That is heading down the military junta track which is not a pretty one.

There are the left-wing commentators who are equally outraged by police taking action. These are the people who think police should be guided by the Dalai Lama rather than the Crimes Act, be armed only with chai tea bags and should be tolerant of everything other than lactose.

There are dumb police and there are violent ones who should be identified and kicked out.

Incidents such as the use of force in the arrest of a man in Epping at the weekend should rightly be referred to Professional Standards for investigation.

Bystander footage of that arrest shows six police officers pinning the man to the ground before one of them appears to stomp on the man’s head.

The man's father has told radio station 3AW his son was also thrown into the air after police rammed him with their car. His son – a roof plumber who has bipolar disorder and was waiting for a hospital bed – is now in a coma as a result of the incident, he said.

The community wants police to be firm, not violent. The use of force must always be measured against the threat at hand.

Back in university days, I had a friend who was weaving home from the pub when he was stopped by police.

They explained there had been a factory break-in and he fitted the general description of the offender. My friend, full of bourbon, bad manners and first-year legal studies notes, told them he did not have to provide his name and address.

He was taken to the factory where a guard said, "Wha'd you bring him in here for? He ain't the guy."

My friend was innocent but he ended up in a cell for being drunk and disorderly, which was shorthand for wasting police time.

There is one video online that says it all: serial pest and poster Witchy Poo from Bunnings was aching for another go.

There she was without her mask, carrying a folder she says contains her medical certificate allowing her to go mask free.

She gives herself the coach's address before filming herself entering a chemist fully expecting the inevitable confrontation.

But her target wasn't there and you can feel her disappointment. You won't get many Facebook likes from just buying haemorrhoid cream.

There is an old police game. Lift home or lock them up. It means police react to the attitude of the people they deal with.

It is a rule as old as the wheel. What goes around comes around.

09/14/2020 World News Comments Off on Police, phones and protesters: Nobody is above the law
Recent Posts
We and our partners use cookies on this site to improve our service, perform analytics, personalize advertising, measure advertising performance, and remember website preferences.Ok