Khurram Nawaz Gandapur, Secretary-General of Pakistan’s Awami Tehreek Party, took to Twitter to congratulate a pilot for avoiding an oil tanker after a video of a close encounter began circulating.

On Twitter, he wrote: “Narrow escape of an aircraft which could have ended in a great disaster. Miraculous save by the pilot’s presence of mind.”

And though the politician was quick off the mark to delete the tweet, social media users didn’t hesitate in chiming in to make fun of his mistake.

In the video attached to the politician’s message, an animated jumbo jet was spotted landing on a runway before an oil tanker suddenly drove across its path.

The plane abandoned its landing and flew off, flying within inches of the tanker.

But the secretary-general was not the only one to make the mistake.

They tweeted: “Mis-coordination between departments working at any airport in the world can lead to a major disaster. 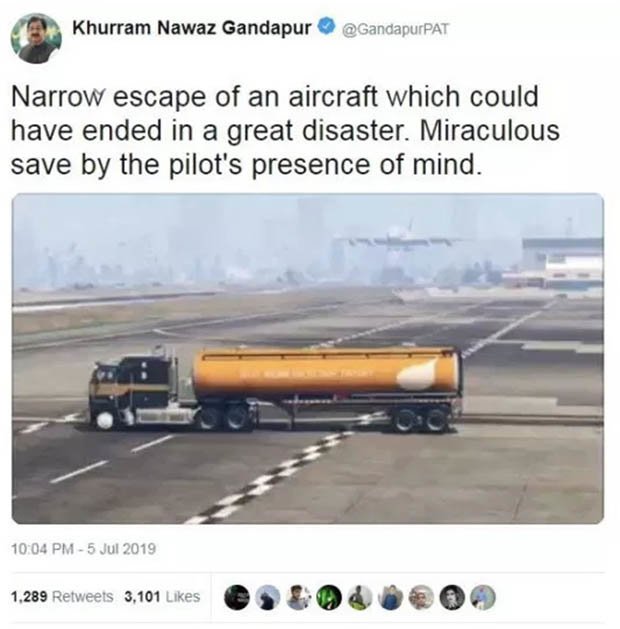 “In this clip an oil tanker was crossing runway and at same time an aircraft fully loaded with passengers landed.

“One must appreciate as to how pilot saves the lives of the passengers.”

One viewer replied: “How difficult is it to know that this was a clip from the game GTA5? Heard of Grand Theft Auto V???

“Even Khurram Nawaz Gandapur, who is secretary-general of Pakistan Awami Tehreek party did this same mistake. God!”