Pope Francis has approved changes to the Lord’s Prayer after saying some of the words implied God pushes people toward sin.

The pontiff revealed in 2017 that he wanted to amend the line “lead us not into temptation” after saying it was based on a flawed translation.

He has now approved changing the words to “do not let us fall into temptation” in Italian, with an announcement made at the general assembly of the Episcopal Conference of Italy last month, according to reports.

However, it appears a new English language version will not be adopted by the Catholic Church in Britain any time soon.

A spokesman for the Catholic Church in Scotland told Sky News it had “no plans to change the wording of the Our Father”.

“The translation of the prayers of the Mass into different languages is a matter for the language groups concerned,” he said.

“The Vatican does not centrally translate all the church’s prayers into all the languages of the world.

“There are no plans to change the English language version of this prayer.”

Meanwhile, a spokeswoman for the Catholic Church in England and Wales told The Sun: “The Lord’s Prayer has been changed in the Italian language – there are no plans at present for it to change in English.” 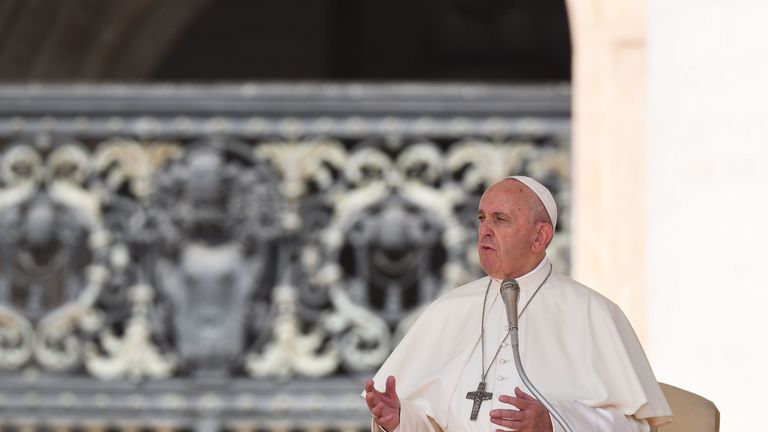 The spokeswoman told the newspaper that “each language will be studied to see the specific meaning”, adding: “I am sure there will be some consultation with the English-speaking nations.”

The Pope told Italy’s TV2000 channel in 2017 that the line “lead us not into temptation” in the Lord’s Prayer was “not a good translation because it speaks of a God who induces temptation”.

“It’s not him pushing me into temptation to then see how I have fallen,” the Pope said.

“A father doesn’t do that, a father helps you to get up immediately. It’s Satan who leads us into temptation, that’s his department.”

The new version of the Lord’s Prayer will appear in a revised third edition of the Italian Missal – a book which includes guiding texts for the celebration of Mass in the Catholic Church, according to reports. Anglicans and Protestants have separate texts and are not affected.