Portland police officials are pleading with the public to help "break the cycle of violence" in the Oregon city, where shootings and murders have skyrocketed, according to authorities and a local report.

At least 850 shootings have been reported in Portland as of Dec. 24, with 59 reported so far this month, Portland Police Bureau (PPB) statistics show. There were 33 shootings reported in December of last year.

As of Christmas Eve, this year’s shootings had surpassed last year’s by more than 116%, with 393 shootings reported in all of 2019, statistics show. 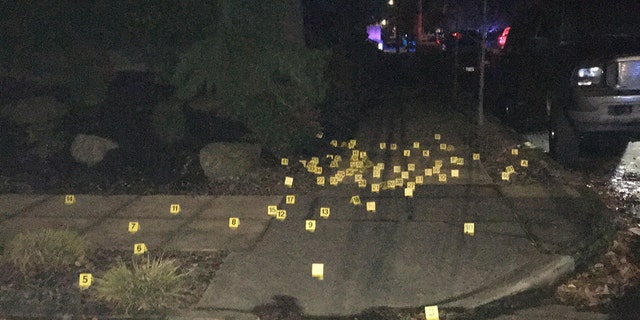 Portland Police responded to reports of shots fired in the area of the 600 block of Northeast Morgan Street in the early morning hours of Dec. 7 (Portland Police Bureau)

At least 53 murders have been reported in Portland as of Dec. 24 – the highest yearly total the city has seen in nearly 30 years, local news station KGW8 reported.

A PPB spokesperson did not immediately respond to Fox News’ request seeking comment.

On Dec. 16, PPB Chief Chuck Lovell appealed to the public on Twitter, telling his followers the police department and the community "need to do everything we can together to break the cycle of violence."

"Gun violence has plagued our city at twice the rate of last year," he said. "On average, someone is shot in Portland roughly every two days."

Lovell said 2020 has been "a deadly year" for Portland and urged the public not to "lose sight of the fact that these are human beings who have died."

"We’ve come together to mask up, to stay home to keep others safe. We have come together to do our best to stop the spread of a deadly disease," he said. "Violence is also a disease that kills and our community is suffering the consequences."

12/28/2020 World News Comments Off on Portland police seeking community collaboration amid shooting, murder surges
Recent Posts
We and our partners use cookies on this site to improve our service, perform analytics, personalize advertising, measure advertising performance, and remember website preferences.Ok