Antifa militants cause destruction in protest of Biden inauguration

In all, 14 cases were submitted for prosecution review and Schmidt said charges remained possible for the other 10 people after additional police investigation.

About 150 people marched on the headquarters of the Democratic Party of Oregon and a federal Immigration and Customs Enforcement (ICE) building to protest against President Joe Biden’s inauguration.

The demonstrators, mostly clad in black, spray-painted anarchy symbols on buildings and marched under a banner that read, “We are ungovernable.”

“We don’t want Biden — we want revenge for police murders, imperialist wars, and fascist massacres,” read another banner that the group marched under. 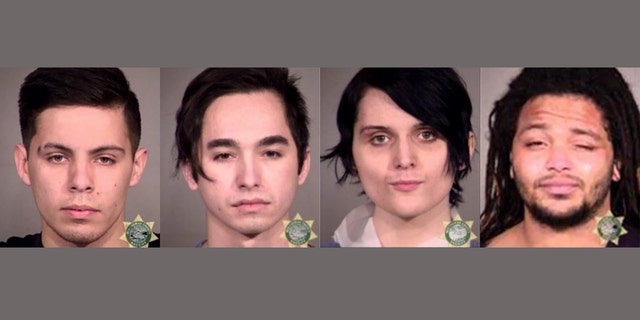 One suspect, identified as Austin Nuchraska, 25, allegedly broke at least one window at the headquarters of the Democratic Party of Oregon, and police found four Molotov cocktails when they arrested him, according to the DA. Nuchraska was charged with rioting, unlawful possession of a destructive device, and criminal mischief.

Trevor Colter, 26, is accused of throwing a projectile at officers as they tried to disperse a crowd at the ICE building. Police say they apprehended him after he initially resisted arrest, and found that he was in “possession of a large knife, ballistic vest, bear mace, gas mask, collapsible baton, wire pull smoke device and three aerial fireworks.” He was charged with rioting, resisting arrest, and disorderly conduct.

Kai-Ave Douvia, 22, allegedly used a pry bar to break out a window at the Democratic Party’s headquarters, and was charged with rioting and criminal mischief.

Nicole Rose, 25, also allegedly broke a window at the headquarters and was charged with rioting and criminal mischief.

Law enforcement was on high alert for Biden’s inauguration nationwide following a riot at the U.S. Capitol building in Washington, D.C., on Jan. 6.

Portland has been a frequent site of protests and unrest following the death of George Floyd while in the custody of Minneapolis police last May.

01/22/2021 World News Comments Off on Portland rioting against Biden inauguration leads to charges for 4, more likely to follow
Recent Posts