Britain’s military parade for Trump: President will be greeted by two 41-gun salutes and a welcome by the Grenadier Guards when he begins his state visit on Monday

President Donald Trump will be greeted by two 41-gun salutes when he arrives to meet the Queen on Monday for the first day of his state visit to Britain.

In an extravagant display of pomp and ceremony, the military honours at Green Park and the Tower of London will be timed for the exact moment that Mr Trump arrives at Buckingham Palace.

At the Palace he and his wife Melania will receive a formal ceremonial welcome, including a guard of honour by Nijmegen Company the Grenadier Guards.

After inspecting the guard with Prince Charles, Mr Trump will hold a private lunch with the Queen before a state banquet on Monday evening – which some Trump opponents including Jeremy Corbyn will not attend. 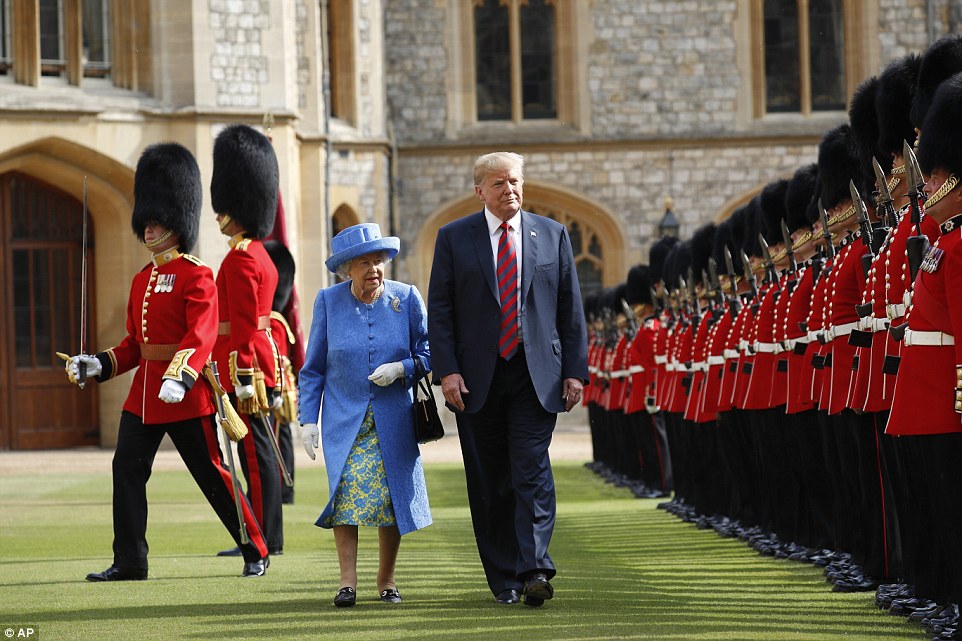 President Donald Trump will be greeted by two 41-gun salutes when he arrives to meet the Queen on Monday for the first day of his state visit to Britain (pictured, the two heads of state at Windsor Castle last year)

In all, there will be 185 guns fired on the day the President arrives, with a second round fired at both Green Park and the Tower of London.

However, these are to mark the anniversary of the Queen’s Coronation.

The 66th anniversary falls a day earlier, but gun salutes are never held on Sundays so the extra honours will – by coincidence – take place on Monday when Mr Trump arrives.

A basic royal gun salute has 21 rounds. But a Royal Park, such as Green Park, adds another 20. There, the King’s Troop Royal Horse Artillery will operate 13-pounder field guns from the World War I era, pulled by 71 horses.

At the Tower of London, which gets 62 guns in a royal anniversary salute, the Honourable Artillery Company will perform the ceremony with L118 Ceremonial Light Guns similar to those used in Afghanistan. 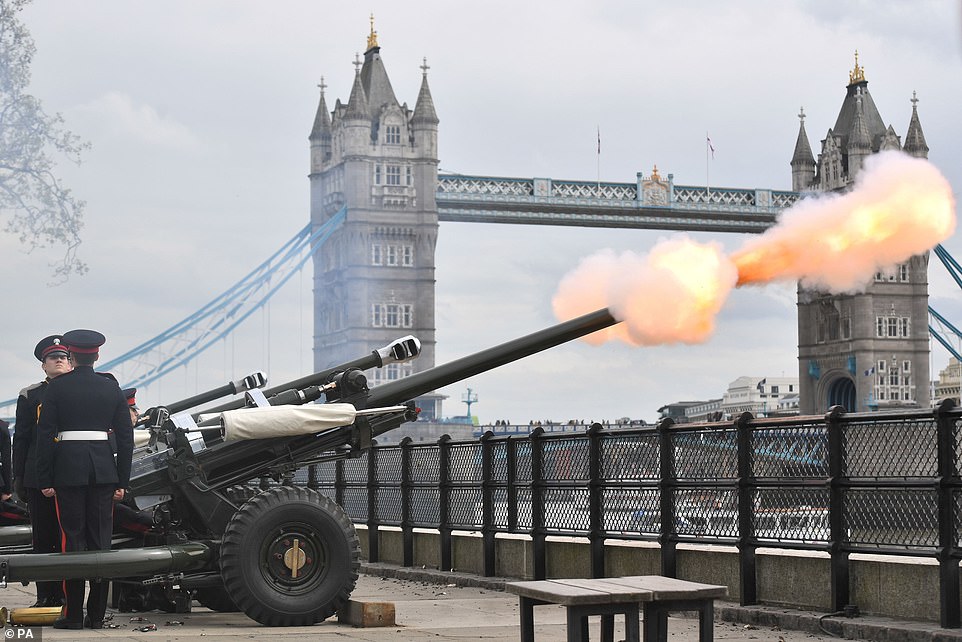 At the Tower of London, which gets 62 guns in a royal anniversary salute, the Honourable Artillery Company (file photo, firing at the Tower in 2018) will perform the ceremony with L118 Ceremonial Light Guns similar to those used in Afghanistan 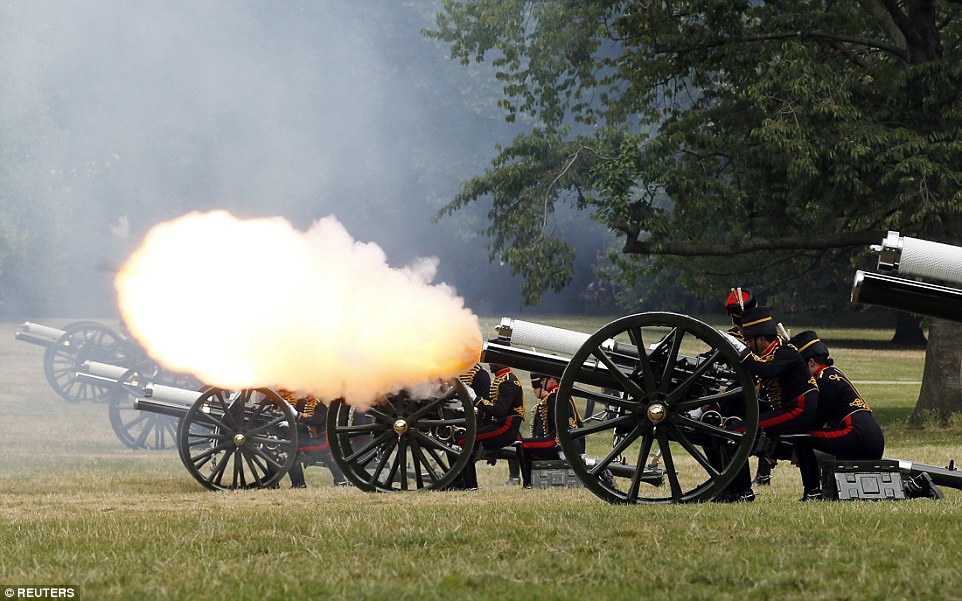 A Ministry of Defence spokesman said: ‘The UK and US have a special relationship that benefits us both.

‘We do more together than any two nations in the world and we cooperate across the board on a wide range of hugely important issues.

‘As close allies in NATO, Permanent Members of the UN Security Council and leading nuclear powers, that cooperation is vital to international peace and security.’

After Monday’s formalities Mr Trump will meet Theresa May at St James’s Palace in one of the PM’s last major engagements before she steps down.

However, he indicated today that he could also meet his ‘friends’ Boris Johnson and Nigel Farage during the three-day trip to Britain.

The US president heaped praise on the two politicians as ‘big powers’, saying Mr Farage’s Brexit Party had won a ‘big victory’ in the EU elections last week.

Mr Farage told MailOnline he would be ‘perfectly happy’ to meet Mr Trump, but no plans were yet in place.

‘We will have to see,’ he said. ‘I would be perfectly happy to, of course I would. I last saw him a couple of months ago on the other side (of the Atlantic).’

It is understood that Mr Johnson – the front runner in the race to take over from Mrs May as PM – has not yet been invited to a meeting. 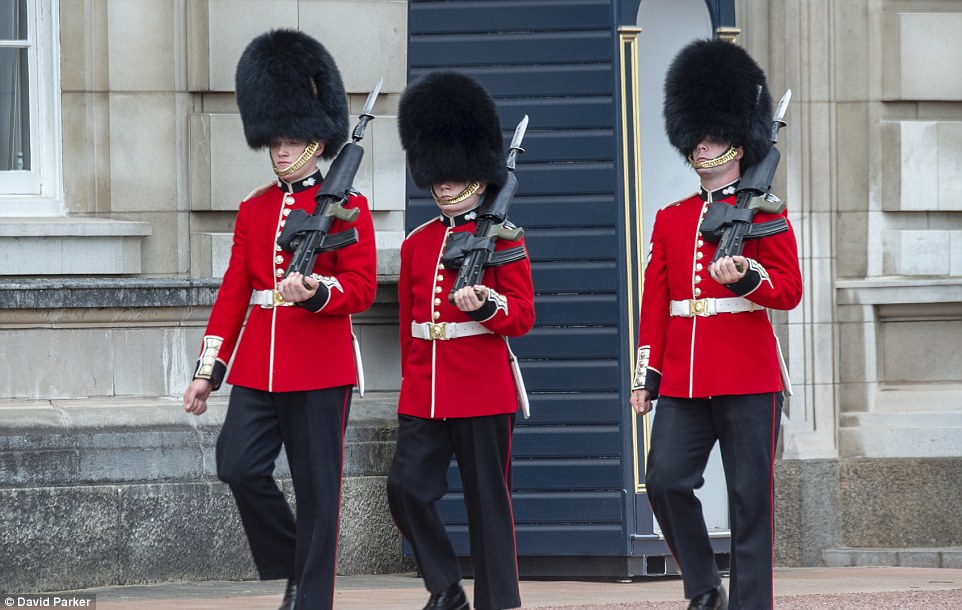 Soldiers from the Grenadier guards guarding the entrance to Buckingham Palace. They will greet Donald and Melania Trump when they arrive for the state visit on Monday 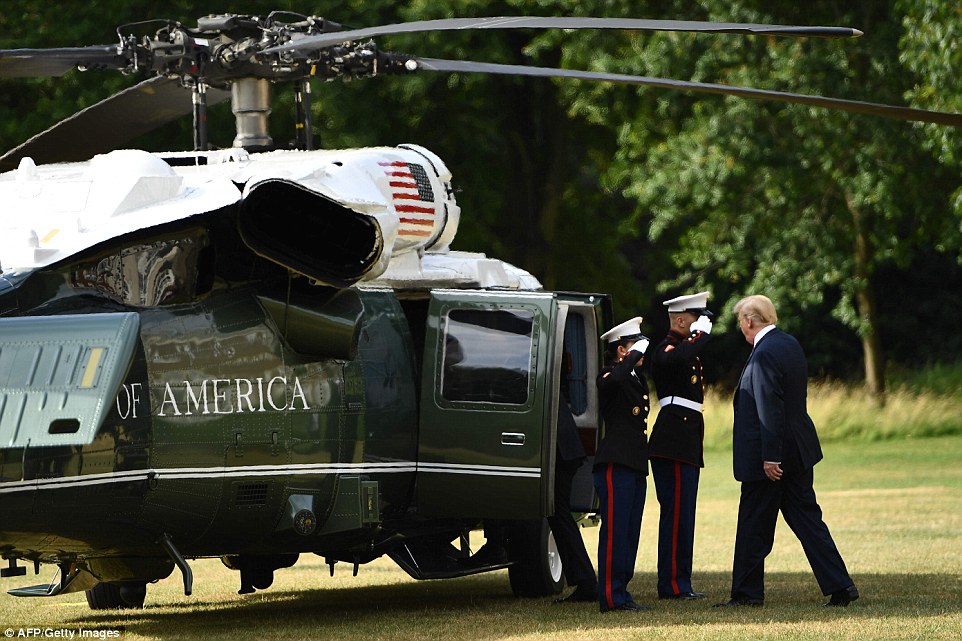 Throughout Mr Trump’s visit he will be accompanied by a motorcade and the official helicopter, Marine One, the U.S. embassy said (pictured, the President boards the helicopter in Washington last year)

On his previous visit to the UK last July, Mr Trump embarrassed Mrs May by hailing the qualities of Mr Johnson, who had just resigned as foreign secretary.

The president said Mr Johnson was ‘a very talented guy’ who would make a ‘great prime minister’.

He said at the time: ‘I was very saddened to see he was leaving government and I hope he goes back in at some point. I think he is a great representative for your country.’

Mr Farage was famously the first senior UK politician to meet Mr Trump after he was elected as president – posing together by the golden elevator in his New York penthouse.

There were claims that Mr Trump wanted the MEP to be made the UK ambassador to the US, although the idea was dismissed by the UK government. 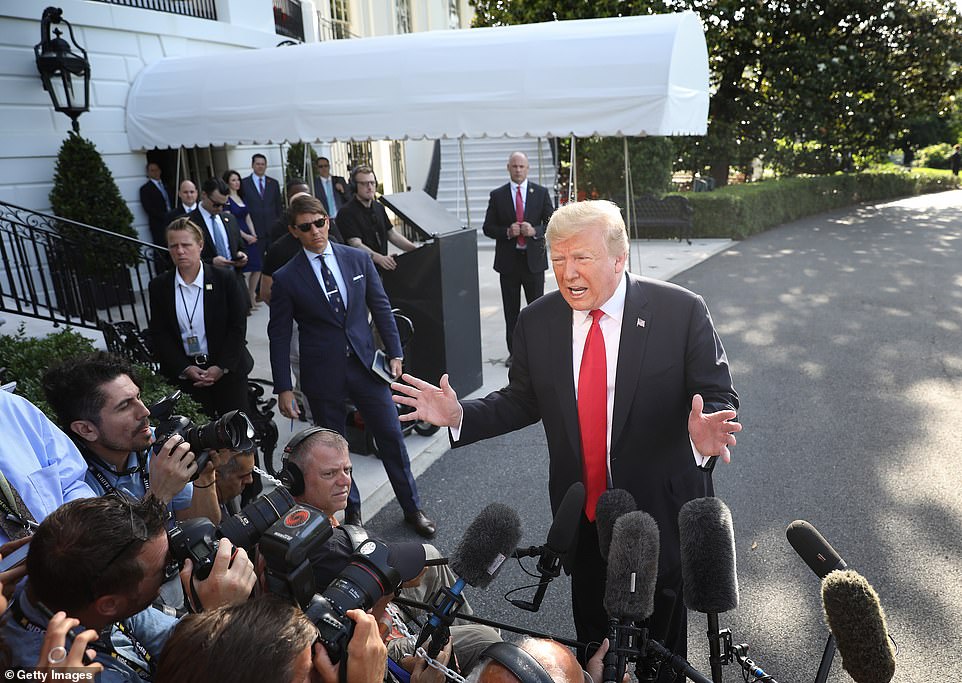 Trump, pictured in Washington today, declared he could meet his ‘friends’ Boris Johnson and Nigel Farage during his state visit to the UK next week

On Wednesday June 5, the Queen and Charles will attend the national commemorative event for the 75th anniversary of the D-Day landings at Southsea Common, Portsmouth.

More than 300 D-Day veterans will be at the ceremony, which aims to tell the story of D-Day through musical performance, testimonial readings and military displays, including a fly-past of 25 modern and historical aircraft.

The ceremony will conclude the three-day visit, as Mr Trump will then leave for Ireland before heading to France to continue D-Day commemorations on the anniversary itself, June 6.

The Metropolitan Police said it had ‘a very experienced command team’ leading the operation as the force geared up to deal with the visit itself and expected protests.

Last year, almost 10,000 officers were deployed for Mr Trump’s trip to the UK, with nearly every force in the country providing staff to support the operation.

During the state visit protesters are again hoping to fly the Donald Trump blimp, which depicts the American leader as a baby.

A 16ft talking robot of Mr Trump sitting on a gold toilet is also expected to make an appearance.

It depicts the American leader with his trousers round his ankles while tweeting and says some of his well-known phrases such as ‘stable genius’ and ‘no collusion’, as well as breaking wind. 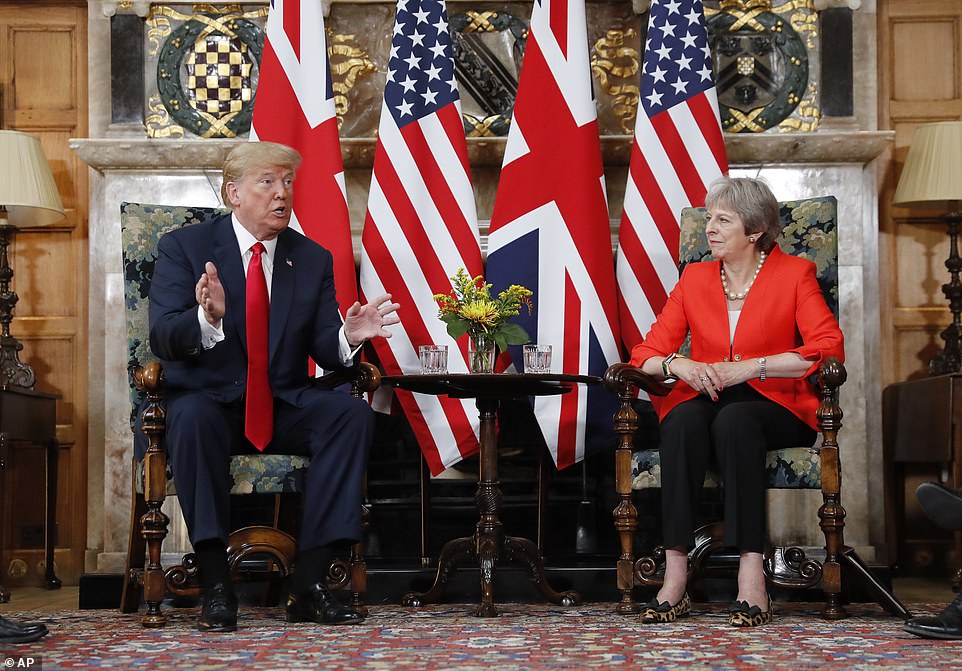 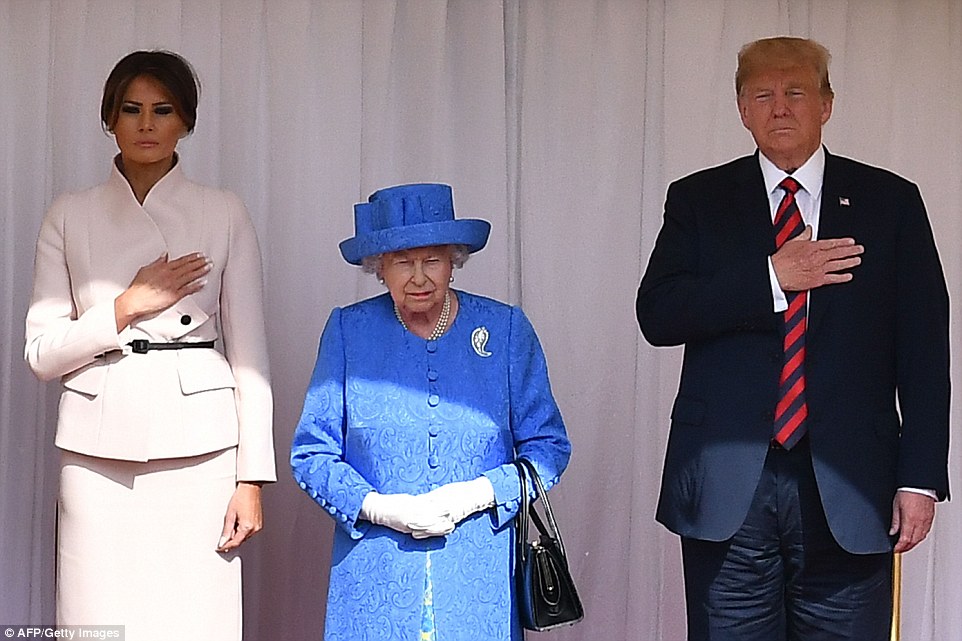 The Queen stands with President Donald Trump First Lady Melania Trump in the Quadrangle at Windsor Castle listening to a band of guardsmen play the U.S. national anthem during last year’s visit

Throughout Mr Trump’s visit he will be accompanied by a motorcade and the official helicopter, Marine One, the U.S. embassy said.

The presidential motorcade, which includes two identical limousines, nicknamed The Beast, is brought across by Air Force transport aircraft.

The Beast is a seven-seat black armoured limousine which reportedly costs two million US dollars and is designed to give Mr Trump unparalleled protection.

It can be turned into a sealed panic room with oxygen tanks, night-vision camera and reinforced steel plating said to be able to resist bullets, chemical attacks and bombs.

The Cadillac has Kevlar-reinforced tyres and steel rims that can keep the vehicle moving even if the tyres have been destroyed. 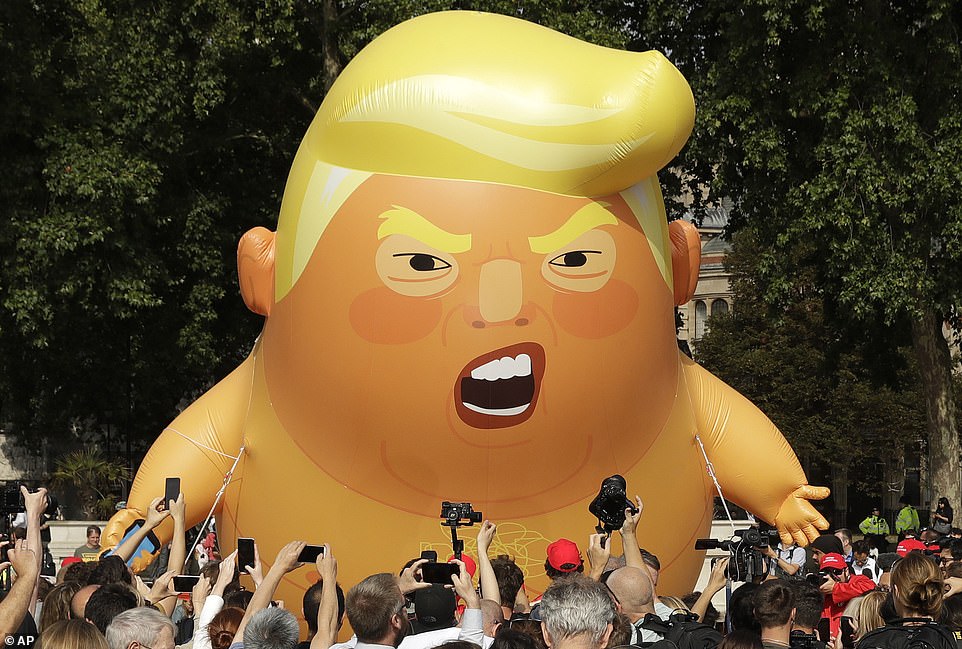 A 20-foot high cartoon baby blimp of U.S. President Donald Trump is flown as a protest against his visit, in Parliament Square in London in July last year 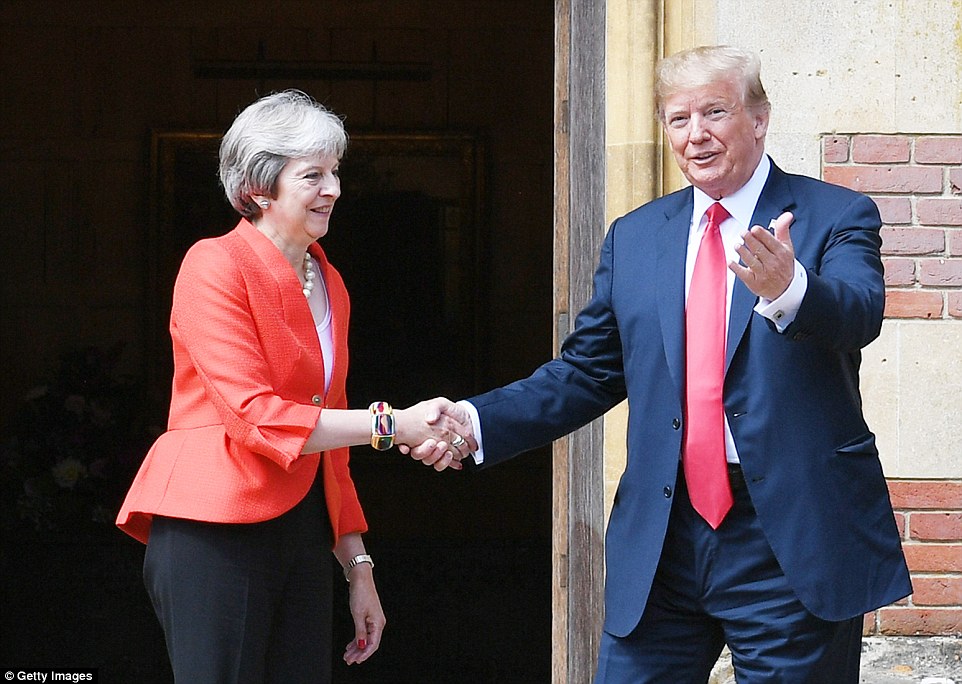 Prime Minister Theresa May greets U.S. President Donald Trump at Chequers during his visit to the UK last summer

Bottles containing the president’s blood type are carried on board in case of a medical emergency, and a satellite phone enables communication to be maintained from anywhere in the world.

The car also features a host of attacking capabilities, such as a pump-action shotgun and a tear gas cannon.

These will be in place to not only protect the president but also his wife and family who will be accompanying him on his visit to the UK.

The President has at his side at all times a White House doctor and one of five rotating military aides who carry the nuclear ‘football’ – equipped with communication tools and a book with prepared war plans. 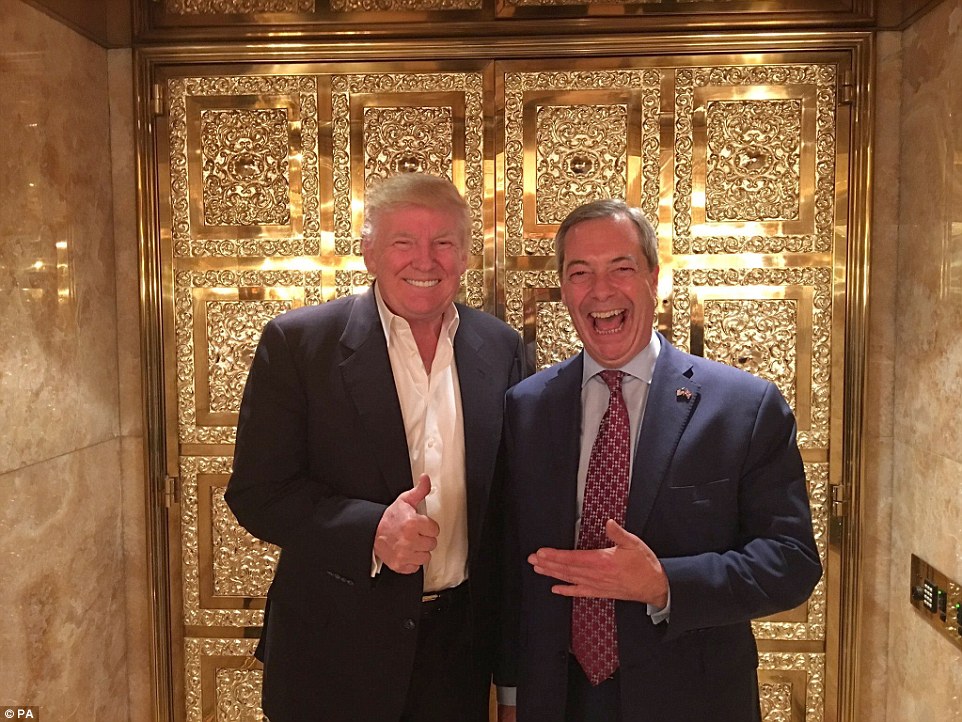 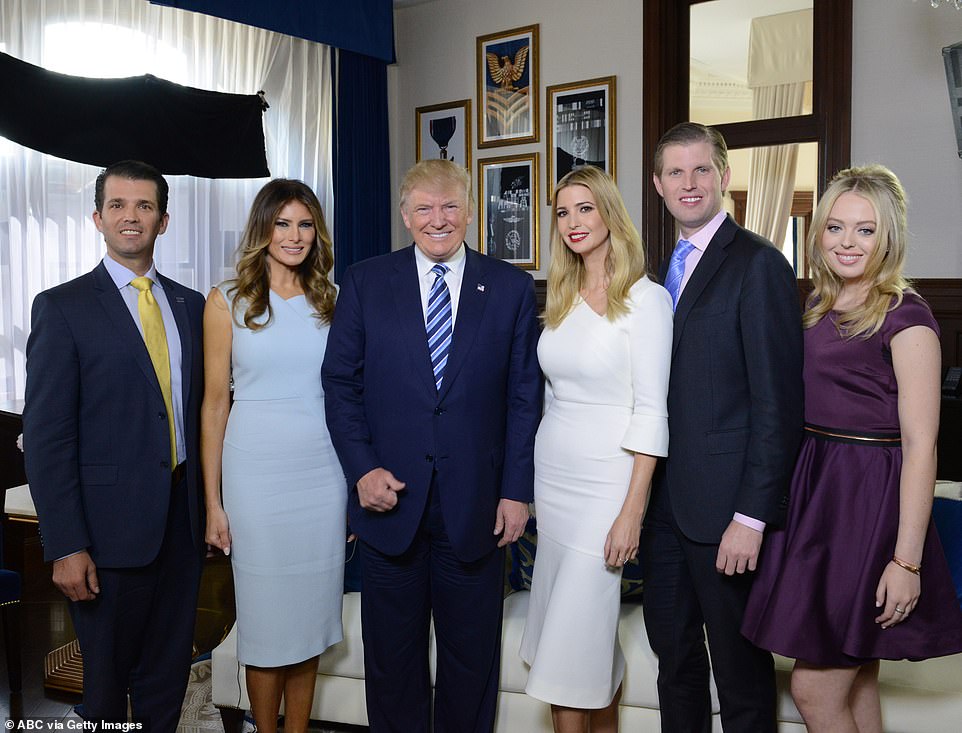 REports have said that Mr Trump will bring his adult children and their spouses to meet with the royal family during the visit to the UK (pictured left to right: Donald Jr, Melania, the President, Ivanka, Eric and Tiffany)