Kenosha, Wisconsin: Protesters set cars on fire, smashed windows and clashed with officers in riot gear after Kenosha police shot and wounded a black man, apparently in the back, while responding to a call about a domestic dispute.

Democratic Governor Tony Evers promptly condemned the shooting on Sunday of 29-year-old Jacob Blake, who was hospitalised in a serious condition after he was gunned down in front of his three children as he leaned over into his SUV. 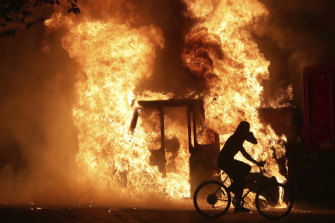 A man on a bike rides past a city truck as it burns outside the Kenosha County Courthouse. Credit:AP

Police in the former auto manufacturing centre of 100,000 people midway between Milwaukee and Chicago did not immediately disclose the race of the three officers at the scene or say whether Blake was armed, and they released no details on the domestic dispute.

The officers were placed on administrative leave, standard practice in a shooting by police, while the state Justice Department investigates.

The shooting happened at about 5pm and was captured from across the street on mobile phone video that was posted online.

In the footage, Blake walks from the sidewalk around the front of his SUV to his driver-side door as officers follow him with their guns pointed and shout at him. As Blake opens the door and leans into the vehicle, an officer grabs his shirt from behind and opens fire while Blake has his back turned.

Seven shots can be heard, though it isn't clear how many struck Blake or how many of the officers fired. During the shooting, a black woman can be seen screaming in the street and jumping up and down.

"While we do not have all of the details yet," the governor said in a statement, "what we know for certain is that he is not the first black man or person to have been shot or injured or mercilessly killed at the hands of individuals in law enforcement in our state or our country."

Evers indicated he intends to take further action over the shooting.

"I have said all along that although we must offer our empathy, equally important is our action," the governor said. "In the coming days, we will demand just that of elected officials in our state who have failed to recognise the racism in our state and our country for far too long." 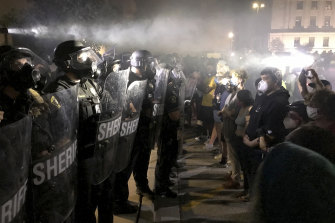 Protestors and police face off outside the Kenosha Police Department on Sunday night.Credit:AP

"As always, the video currently circulating does not capture all the intricacies of a highly dynamic incident," Deates said in a statement. "We ask that you withhold from passing judgment until all the facts are known and released."

Online court records indicate Kenosha County prosecutors charged Blake on July 6 with third-degree sexual assault, trespassing and disorderly conduct in connection with domestic abuse. An arrest warrant was issued for Blake the following day. The records contain no further details and do not list an attorney for Blake.

In the unrest that followed on Sunday night, social media posts showed neighbours gathering in the surrounding streets and shouting at police. Some could be heard chanting, "No justice, no peace!" Others appeared to throw objects at officers and damage police vehicles. 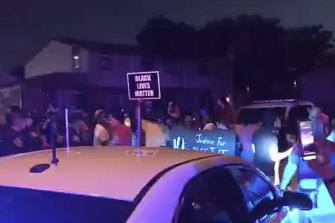 Protesters gather near the site of the police shooting on Sunday night. Credit:AP

In a scene that mirrored the widespread protests over the police shootings of George Floyd, Breonna Taylor and other black people, marchers headed to the Kenosha County Public Safety Building, which houses the police and sheriff's departments. Authorities mostly blocked off the building, which was closed on Monday because of damage, authorities said.

Laquisha Booker, who is Blake's partner, told NBC's Milwaukee affiliate, WTMJ-TV, that her and Blake's three children were in the back seat of the SUV when police shot him.

"That man just literally grabbed him by his shirt and looked the other way and was just shooting him. With the kids in the back screaming. Screaming," Booker said.

Civil rights attorney Benjamin Crump, who has represented Floyd's and Taylor's families and said he has been retained by Blake's family, said Blake was "simply trying to do the right thing by intervening in a domestic incident." Police did not immediately return messages seeking details on the dispute.

"We all watched the horrific video of Jacob Blake being shot in the back several times by Kenosha police," Crump said in a statement. "Even worse, his three sons witnessed their father collapse after being riddled with bullets. … It's a miracle he's still alive."

Wisconsin's Republican Assembly Majority Leader Jim Steineke cautioned the public and elected officials against "racing towards judgment," given how few details were known.

"The frustration & anger that many in our communities are feeling must be met with empathy, but cannot be further fueled by politicians' statements or actions that can stoke flames of violence," tweeted Steineke, who is white and lives about 225 kilometres north of Kenosha in Appleton.

08/24/2020 World News Comments Off on Protests erupt in Wisconsin after video shows police shooting black man
Recent Posts
We and our partners use cookies on this site to improve our service, perform analytics, personalize advertising, measure advertising performance, and remember website preferences.Ok