Russia leader says Moscow will not send troops to Caracas, warns US military intervention there will be a ‘catastrophe’. 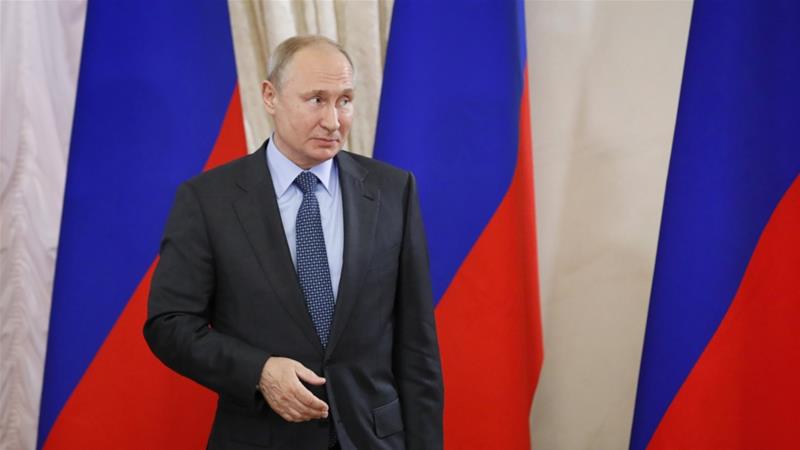 Russian President Vladimir Putin said on Thursday that Moscow has no plans to send troops to shore up Venezuela’s embattled leader Nicolas Maduro.

Speaking in St Petersburg, Putin also warned that a United States military intervention in Venezuela would be a “catastrophe”, claiming even Washington’s allies did not support such a course of action.

“We aren’t building any military bases there [Venezuela], we aren’t sending troops there, we have never done that,” Putin said when asked about a recent tweet by Donald Trump, in which the US president said Moscow had told Washington it had pulled its personnel out of Venezuela.

Putin said Russian experts remained in the Latin American country in order to service Russian military hardware, something he said they were contractually obliged to do.

Russia has staunchly backed Maduro, while the US and dozens of other nations have cast their support behind opposition leader Juan Guaido, who invoked the constitution in January to declared himself interim president, asserting that Maduro’s re-election last year was illegitimate.

Putin said US sanctions against Venezuela have hurt ordinary people and warned Washington against using force.

“If we consider the conditions in which millions of people live in Venezuela a question arises whether they are fighting Maduro or the population? We don’t approve but condemn such actions [sanctions], leave alone a military intervention – that would be a catastrophe.

“The crisis in Venezuela should be settled by the Venezuelan people,” said Putin.

He went on to describe Guaido as a “nice person”, but said his leadership claim has created a precedent that could “lead to chaos across the world”.

Lima Group calls on Russia, China to be part of solution

Putin’s comments came as the regional Lima Group issued a statement urging countries that support Maduro’s government, particularly Russia, China, Cuba and Turkey, to be part of the solution to Venezuela’s crisis.

The 12-nation bloc also called on the international community to take action against what it said was the “growing involvement” of the Maduro government in corruption, drug trafficking and organised crime.

It also rejected Maduro’s call on May 20 for early elections for Venezuela’s National Assembly, which is run by the opposition.

On Monday, the Lima Group and the European Union-led contact group on Venezuela issued a joint statement calling on Latin America and the broader international community to play a more active role in restoring democracy to the country.

“While the solution needs to be a Venezuelan one, the regional impact of the crisis requires the region and the international community to play a more active role in supporting a prompt return to democracy,” the two groups said.

The US has not ruled out military intervention with officials repeatedly saying that “all options” are on the table when it comes to Venezuela.

Millions of people have left the country in recent years, fleeing hyperinflation, unemployment and food and medicine shortages.

In May, Venezuela’s government and the opposition met for talks in the Norwegian capital, Oslo, but the meeting ended without an agreement.

06/25/2019 World News Comments Off on Putin: Russia has no plans to send troops to Venezuela
Recent Posts