Nerve disorder that affects the feet, hands and limbs is added as a rare side effect of the AstraZeneca Covid jab

A rare nerve disorder that affects the feet, hands and limbs has been added to the list of possible side effects of the AstraZeneca vaccine by UK regulators.

Guillain-Barré syndrome, which sees the immune system go haywire and start to attack nerve cells, was added by the Medicines and Healthcare products Regulatory Agency (MHRA).

Most people who suffer from the autoimmune disorder make a full recovery, but one in five can be left with long-term problems such as difficulty walking and one in 20 die.

The European Medicines Agency said last month that 833 cases of Guillain-Barre syndrome had been reported worldwide out of 592million doses dished out.

The benefits of the vaccine still far outweigh the risks, regulators have stressed. 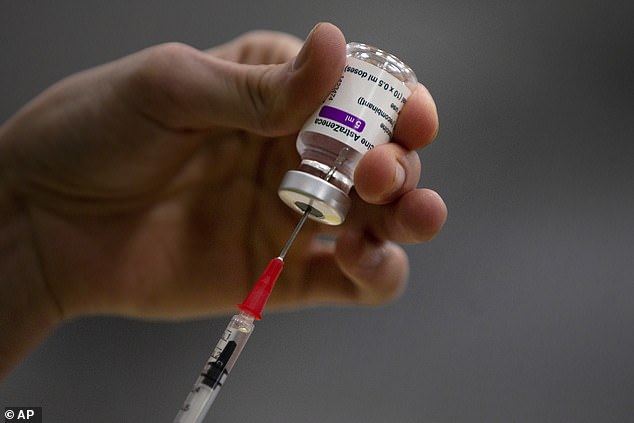 A rare nerve disorder that affects the feet, hands and limbs has been added to the list of possible side effects of the AstraZeneca vaccine by UK regulators

The EMA previously said they considered it ‘at least a reasonable possibility’ that Guillain-Barre is a side effect of the Oxford-made jab.

The regulator has already listed the condition to the single-shot dose Johnson and Johnson vaccine, which uses the same technology as the AZ jab.

Up to September, there were 393 UK cases after vaccination with the jab but the watchdog is not certain the condition is occurring more often than it normally would.

It is not clear how many of these led to long-term complications, but three Britons have died. 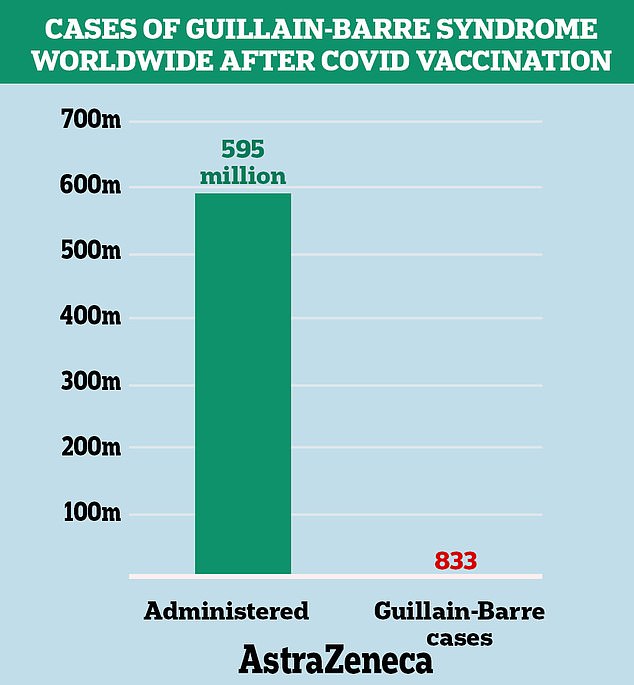 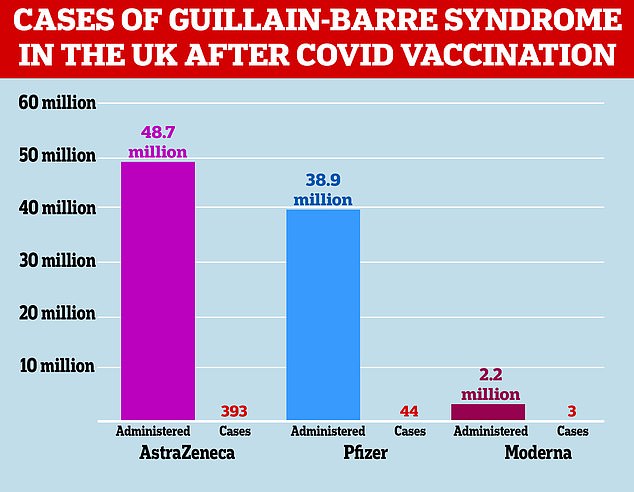 The Medicines and Healthcare products Regulatory Agency (MHRA) added there have been 44 suspected cases following administration of the Pfizer jab, and one death.

There have also been three cases after inoculation with the Moderna jab.

Professor Ian Douglas, a pharmacoepidemiologist at the London School of Hygiene and Tropical Medicine, said the benefits of the vaccine still vastly outweighed the risks.

What is Guillain-Barre syndrome?

Guillain-Barre syndrome is a very rare condition that can be sparked by viral infections.

It is thought to be triggered when the immune system misfires and starts attacking the body’s own nerve cells.

Symptoms of the condition include numbness, pins and needles, muscle weakness and problems with balance and co-ordination.

The NHS says they tend to start in the hands and feet before spreading up the arms and legs.

They should get worse over the first few days, they said, before starting to improve.

Most people who suffer Guillain-Barre syndrome make a full recovery, but around one in five are left with longer term problems and one in 20 die.

Treatments include painkillers and blood transfusions to help bring the condition under control.

‘Taken together, I don’t believe this news alters the risk benefit profile of the vaccine,’ he said.

‘But it does serve as a helpful prompt for anyone who experiences early signs of Guillain-Barre syndrome shortly after receiving a Covid vaccine to seek medical help.

‘These include numbness, weakness and pins and needles in the hands and feet, often becoming worse over a few days.’

A very rare blood clot on the brain was listed as a side effect of the AstraZeneca vaccine earlier this year.

The UK’s vaccine advisers have recommended under-40s receive an alternative jab to this jab, because of concerns over the condition which appeared to be more common in younger people.

Pfizer’s vaccine has been linked to very rare cases of inflammation of the heart, or myocarditis.

The condition appears to be most common in young boys.

The US Food and Drug Administration also warned in July of an ‘increased risk’ of developing Guillain-Barré syndrome with Johnson & Johnson’s dose.

The AstraZeneca jab suffered a blow in May after regulators found a very rare blood clot in the brain could be sparked by the vaccine.

Britain’s vaccine advisory committee — the Joint Committee on Vaccinations and Immunisations (JCVI) — has recommended that under-40s are offered an alternative to the jab.

But a study found the risk of suffering a blood clot is ‘much higher’ after catching Covid compared to people who got the AstraZeneca jab.

The latest Oxford University study suggests the risk from clots is higher from the virus itself than the British-made vaccine.

In the biggest study of its kind, researchers looked at the medical records of 29million people in England who had either tested positive or had a vaccine by April.

Among those who caught Covid, 12,614 per 10million suffered blood clots in a vein who would not have otherwise developed the condition.

Whereas the risk among those given the AstraZeneca vaccine was significantly lower at 66 per 10million.

For Pfizer’s vaccine — which uses a different technology to AstraZeneca’s jab — the researchers did not spot any links between the jab and a clotting complication.