NSW Treasurer Dominic Perrottet has seized on record Sydney housing prices as proof that sweeping changes to the state’s property tax system must be urgently introduced – even if it costs the state.

Mr Perrottet said scores of young Sydneysiders were effectively locked out of the housing market and the government needed to pursue “innovative” reform as soon as possible.

“We need a fairer and equitable system in place, and yes those changes can be difficult, yes they financially can cost the state but ultimately we want to make sure we give our young people every single opportunity,” Mr Perrottet said on Thursday. 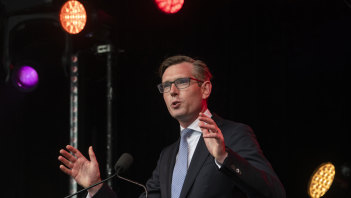 Mr Perrottet’s renewed push for stamp duty reform comes as the median house price in Sydney reached a record high of more than $1.2 million, according to the Domain House Price Report.

The Treasurer said stamp duty was a prohibitive tax for prospective buyers whose saving efforts were already being outpaced by record growth.

“When you see the time it takes for young people to save for stamp duty, to save for that property … by the time young people have saved for that deposit they’re going backwards because the prices of the properties have increased at a much greater rate,” Mr Perrottet said.

“You could argue that it’s justified,” he said. “Governments worry that if prices come down too much, that will create a panic and slow the economic recovery.

“[But] this was an opportunity to fundamentally lead to more affordable housing in Australia and yet again we’re going to end up with more expensive housing.”

Under Mr Perrottet’s plan, home buyers would have a choice between paying stamp duty up front – normally a little less than 4 per cent of the purchase value – or a smaller annual property tax. Once the latter property is traded under the new scheme it would remain annually taxed for subsequent owners.

A consultation paper released in November suggests that for owner-occupiers the new property tax would consist of a fixed annual rate of $500 plus 0.3 per cent of the unimproved land value, an approach broadly in line with council rates.

The consultation period runs until March, when the government will consider responses before the next state budget.

Analysis of the proposal by the Grattan Institute found an owner-occupier purchasing a $1.15 million home would now pay stamp duty of $48,500. But if that buyer opted for the new property tax, they would pay about $2230 annually. That amount would rise slowly over time due to indexation.

Many official reviews have concluded stamp duty is a highly inefficient form of taxation.

The federal government’s 2010 Henry tax review found the economic welfare loss for every dollar of stamp duty raised is 35c. For a broad-based land tax like the one Perrottet wants to phase in, that loss is only 8c.

The NSW government claims its new property tax model would inject more than $11 billion into the economy over the first four years and boost economic output by 1.7 per cent over the long term.

“While we are yet to see the Berejiklian government’s final proposal, we want to move heaven and earth to help young people buy their first home,” Mr Secord said.

“Young families across NSW say that stamp duty is one of the biggest barriers to home-ownership and in many cases, it means that young people have to save for an extra three years to meet the additional cost.”

With Elizabeth Redman and Tawar Razaghi.