But the Premier confirmed regional Victoria would continue to enjoy more freedom than Melbourne in the early stages of the reopening process to be announced on Sunday, as regional mayors wary of COVID-19 spreading to their towns called for caution in lifting travel bans.

The state government was also poised on Tuesday night to win a six-month extension of its powers to declare COVID-19 states of emergency after a surprise intervention from the Victorian Greens.

Mr Andrews told his daily media briefing that it was too early to discuss how restrictions would differ between the city and the rest of the state when the long-awaited “road map” was made public, but said regional Victorians would be able to do things “that won’t yet be allowed in metro Melbourne”. 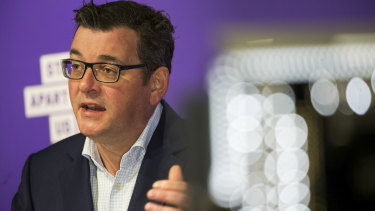 “Today is not the day to speculate or go into that detail," the Premier said. "But I did want to confirm for all regional Victorians that there will be a different roadmap.”

The Premier said he did not believe a separate plan for regional Victoria would cause travel restrictions to stay in place for longer.

Colac Otway mayor Jason Schram, whose shire has had the greatest number of COVID-19 infections in regional Victoria, said local businesses would welcome more visitors from Melbourne but many residents would be wary of another outbreak.

“We do have to really watch what’s coming out of Melbourne,” he said.

Surf Coast mayor Rose Hodge said residents in her area also want a cautious approach, but that she and her colleagues would work with the official health advice.

Mitchell Shire mayor David Lowe said his region was suffering from the block on visitors from Melbourne.

"We have many people in the south of the shire who are having to use permits to travel to work in Melbourne every day, too, so we’re caught in two ways," Cr Lowe said. "But we do have to be realistic and work with our metropolitan cousins.”

The state of emergency legislation was due to pass late on Tuesday evening after Greens leader Samantha Ratnam made an unexpected return to Parliament from maternity leave and cast her vote in the upper house in favour of the government's bill.

The Green’s vote gave Labor the numbers it needed to overcome the resistance of the Coalition and most of the crossbench, as the chamber divided broadly across progressive-conservative lines, and pass the legislation with the support of two other crossbenchers.

The compromise deal, brokered by Reason Party leader Fiona Patten, grants a one-off extension for six months, not the permanent legislative change the government was seeking.

In return, Health Minister Jenny Mikakos has agreed to provide Parliament with the Chief Health Officer's advice each time the government renews its state of emergency.

Opposition Leader Michael O’Brien accused the Greens and Labor of working together to prolong the lockdown.

“The fact that Labor and the Greens are in a coalition to keep Victorians potentially locked down should disappoint a lot of people but probably not surprise many,” Mr O’Brien said.

The next step of the process, passing the bill in the lower house where Labor commands a large majority, is due later in the week.