Delta is knocking us around. Big time.

With the benefit of hindsight, Victoria did extremely well to re-eliminate Delta in lockdown five. 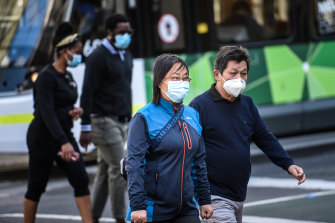 Victoria’s daily case numbers would be a lot worse without lockdown. Credit:Justin McManus

Lockdown six is working in so far as it’s keeping daily increases in cases to “only” 5 per cent; that daily increase would be a lot worse without lockdown.

But this time around, lockdown is not causing daily numbers to decrease. Why?

First, this virus is super slippery. Not only does an infected person infect more people on average than for previous variants, but an infected person becomes infectious as early as day one – it was perhaps day three for pre-Delta variants.

This narrows the window of opportunity for contact tracing – it is harder now to track down and get infected contacts into isolation before they infect others.

Second, heterogeneity. Our society is diverse. The reproductive rate (or R0) of Delta in a society like Australia is probably about 6.5 on average. This means that every 10 people who test positive to COVID-19 will collectively infect another 65 people in a society with no restrictions (i.e. pre-COVID times).

But it varies – probably enormously – by sub-populations. For example, in the LGAs of concern in Sydney and some western suburbs of Melbourne, due to the population mix including more young people, multi-generational households, more essential workers, more casualised workers, denser and closer social connections, and so on, the R0 is probably well above 6.5.

That means the measures that might work for a reproductive rate on average of 6.5 no longer work.

Heterogeneity is like having pockets of the bush super dry and flammable. Not only does it make those pockets of the forest more likely to burn first in the next fire season, but the flames then spread out with an intensity to those areas where the fire might not have started per se. 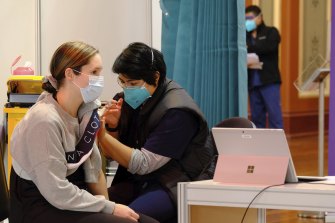 Pfizer lowers your chance of being infected by 80 per cent and AstraZeneca by 60 per cent.Credit:Luis Enrique Ascui

Third, vaccines are great at preventing serious illness and death, but not as great as we would like at dampening transmission. We absolutely must get vaccine coverage as high as possible. With our current toolkit, it is our best way out. But it will take time, and not be a full solution.

This is why we will not achieve herd immunity through vaccination alone. We will need further measures. Like ongoing restrictions to work in concert with vaccines.

In Victoria now, given 120 cases announced on Wednesday, we do not have a good lid on this outbreak. Rather, daily cases are increasing by an average of over 5 per cent per day in the last 10 days.

If this is the true effective reproductive rate of Delta in Victoria’s current lockdown, then we might peak at 2000 cases per day in early November before increasing vaccine coverage catches up and turns the curve back down. (Assumptions in my calculations include that the virus behaves according to average maths, which it is notorious for not doing, that we maintain the restrictions we have now, and various assumptions about vaccines.)

Ten days ago, I prompted some public discussion about options if case numbers had not gone down by September 2. This included a “moonshot” proposal whereby we could relax restrictions and “bridge over” to November with some increase in cases, but the curve being caught and turned by increasing vaccine coverage in late October and early November.

However, we now have increasing cases, which means there is little or no room to move to reduce restrictions.

Accordingly, and correctly, the Victorian government has taken a cautious approach with a very modest relaxation of restrictions. Such as opening playgrounds with new measures (no de-masking, QR codes) and increasing the 5km radius to 10km in a few weeks. 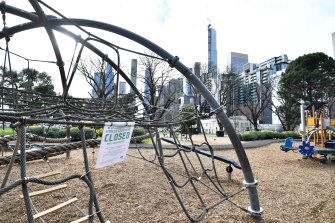 The Victorian government has taken a cautious approach with a modest relaxation of restrictions, such as re-opening playgrounds.Credit:Joe Armao

I am sure you are sick of lockdown; I am. So, what gives me hope?

We need innovation. For example, a third mRNA vaccine dose to those who have received double-dose AstraZeneca as soon as everyone has been initial dosed. There are good grounds to expect that an mRNA vaccine on top of AZ will see a substantial increase in vaccine performance, dampening transmission.

We also need to think innovatively about how we can change our society to drive down the reproductive rate of this virus. Markedly improving ventilation of buildings, like schools and office blocks, seems a really important avenue to explore – although that will not help us in the next two months.

Back to heterogeneity. We need to vaccinate first among populations that – through no fault of their own – have the conditions that the virus loves the most. Adding outreach vaccination clinics to target these populations, on top of mass vaccination hubs, is important.

Professor Tony Blakely is an epidemiologist and public health medicine specialist at the University of Melbourne.