Moscow: The Russian military said on Monday that a Russian Mi-24 attack helicopter was shot down in Armenia's Ararat province, near the border with Azerbaijan's Nakhchivan region, killing two crew members and severely injuring a third.

The helicopter appeared to have been shot down by a portable surface-to-air missile system fired from the ground, the Russian Defence Ministry said in a statement, without attributing blame. 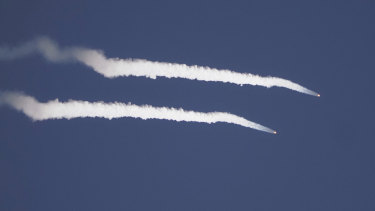 Tactical missiles fly in the sky in the separatist region of Nagorno-Karabakh. Credit:AP

Russia intends to conduct a thorough investigation into the incident, which occurred in a mountainous area near the Armenian village of Yeraskh, the statement said.

Armenia and Azerbaijan have been engaged in intense fighting for more than a month over the disputed Nagorno-Karabakh region, at least a hundred kilometres to the east of the helicopter crash.

Russia maintains a permanent military presence in Armenia under a post-Soviet alliance but has refused to enter the conflict.

Russia appears set to preserve its robust ties with Azerbaijan and that country's close ally, Turkey. 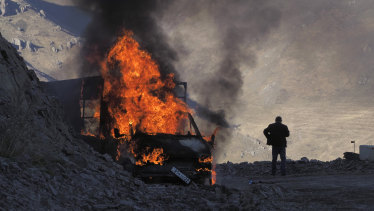 A man stands near his burning car which caught on fire during the climb along the road to a mountain pass, near the border between Nagorno-Karabakh and Armenia.Credit:AP

Russian President Vladimir Putin has said the fighting in the disputed region does not constitute a direct attack on Armenia.

Largely controlled by Christian Armenian troops for more than a quarter of a century, Nagorno-Karabakh is considered by the United Nations to be part of predominantly Muslim Azerbaijan.

Tens of thousands of civilians have been displaced by the recent fighting, which began in late September. Azerbaijan has made significant advances into previously Armenian-held territory.

Azerbaijan said at the weekend that it had taken control of the strategically important town of Shusha – known as Shushi in Armenian – which has been the focus of fighting in recent weeks.

Armenian Prime Minister Nikol Pashinyan said in a terse statement on Monday that the battle for the town was continuing.

With more than 1000 people reported killed, the recent fighting has been the deadliest since Armenia and Azerbaijan fought a war in the late 1980s and early 1990s as they transitioned into independent countries amid the Soviet dissolution.

Both sides have traded and denied allegations for starting the flare-up as well as targeting civilian areas.

11/13/2020 World News Comments Off on Russian helicopter shot down in Armenia near border with Azerbaijan
Recent Posts
We and our partners use cookies on this site to improve our service, perform analytics, personalize advertising, measure advertising performance, and remember website preferences.Ok