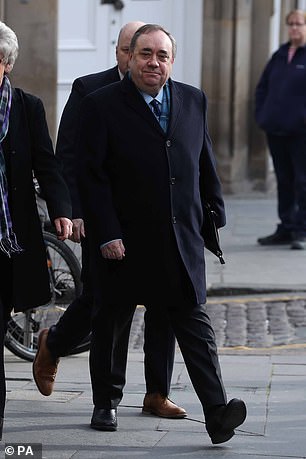 Mr Salmond was cleared of 13 charges of sexual assault, attempted rape and indecent exposure at the High Court in Edinburgh in March

Nicola Sturgeon was branded absurd today as she clashed with Ruth Davidson over her handling of sexual misconduct claims against her predecessor Alex Salmond.

Scotland’s First Minister was accused of ‘taking people for fools’ as she insisted she has ‘nothing to hide’ after being accused of misleading the Scottish Parliament about when she first knew about allegations against him.

Ms Sturgeon previously said she was first made aware of complaints against her predecessor when he told her in a meeting at her home on April 2, 2018.

But it has since emerged that she was informed during a meeting with Mr Salmond’s former chief of staff Geoff Aberdein on March 29 that year, three days earlier.

During First Minister’s Questions today the First Minister was challenged by Tory Holyrood leader Ms Davidson on whether her claim to have simply forgotten was ‘credible’.

Ms Sturgeon said: ‘I get why people will look at that and raise an eyebrow.

‘There is something seared on my memory and it is actually the meeting that took place some three days later when Alex Salmond himself sat in my own home and gave me the details of the complaints that had been made against him and also gave me his response to aspects of those complaints.

‘That is what seared in my memory and I think most reasonable people would understand that.

‘Forgive me if that has somehow overwritten in my mind a much more fleeting, opportunistic meeting that took place a few days earlier, that is just how it is.’

But Ms Davidson replied:  ‘This isn’t a trivial matter. And what lies at the heart of this matter is whether there was an abuse of power, and an abuse of power affects every citizen of this country. And I’m afraid the position of the First Minister is absurd.

‘Why did the First Minister mislead Parliament by omitting the fact that this meeting ever happened?’ 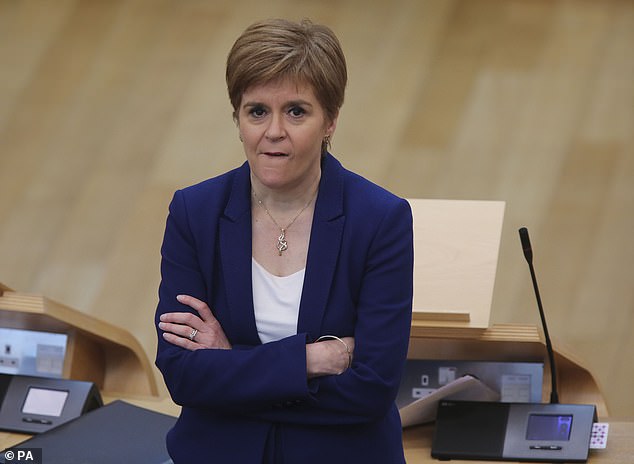 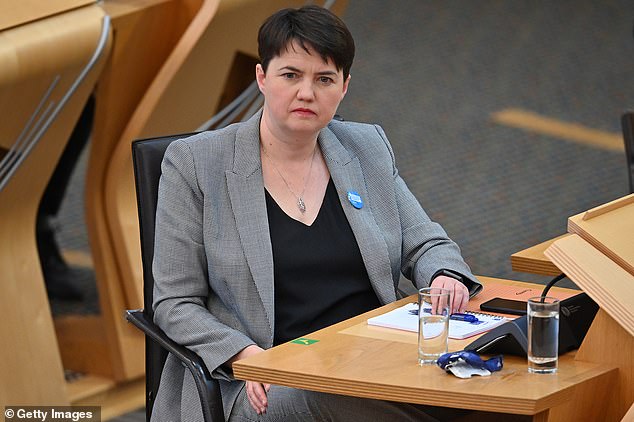 Ms Davidson said: ‘This isn’t a trivial matter … and I’m afraid the position of the First Minister is absurd’

Mr Salmond was cleared of 13 charges of sexual assault, attempted rape and indecent exposure at the High Court in Edinburgh in March.

The court case followed legal action taken by the former first minister, which found the Scottish Government’s handling of complaints against him had been unlawful and he was awarded more than £500,000.

In evidence submitted to the Committee on the Scottish Government Handling of Harassment Complaints, which was set up to investigate the matter, Ms Sturgeon said she had forgotten about the meeting with Mr Aberdein.

The First Minister repeatedly added she wants to appear before the committee to answer any questions MSPs may have, adding that she is ‘looking forward’ to giving evidence.

Ms Davidson said the explanation given by the First Minister ‘does not even bear the lightest scrutiny’, adding it is ‘beyond belief’.

The First Minister continued: ‘That is the fact, other people can decide to give their own evidence – I will give mine and I will sit before a committee whenever the committee decides to call me and I will do that on oath and I will give my account of what happened.

‘I have got nothing to hide in all of this.’

Ms Davidson went on to ask the First Minister if she believes a judge-led inquiry should be launched to look into the handling of the complaints, an idea put forward by SNP MSP Alex Neil.

The First Minister said: ‘There is a parliamentary inquiry under way that I’ve given evidence to and that I will sit in front of and give evidence to orally, I will do it under oath.

‘I’ve got nothing to hide in all of this. I’ve had two years or more of people making accusations about my conduct.

‘It’s not my conduct that sparked off this, I’ve tried to act in the proper way – if I’ve made mistakes along the way then I will say that and people can make their judgments.

10/08/2020 World News Comments Off on Ruth Davidson and Nicola Sturgeon clash over Alex Salmond sex claims
Recent Posts
We and our partners use cookies on this site to improve our service, perform analytics, personalize advertising, measure advertising performance, and remember website preferences.Ok