Ryder Cup winner Thorbjørn Olesen wept as he was cleared of sexually assaulting a woman on a plane after claiming he suffered an adverse reaction to sleeping pills.

The Danish golfer, 31, claimed he has no memory of his ‘bizarre behaviour’ on board the plane from Nashville to London after taking sleeping tablets left in his wash bag by partner Lauren Zafer.

Olesen said he would never have taken the Ambien pills after drinking alcohol on the BA flight if he had known it would end up wrecking his life and career, a London court heard on Wednesday.

He was on the eight-hour flight with other professionals including England’s Ian Poulter, 45, and Justin Rose, 41, following the World Golf Championships-FedEx St Jude Invitational in Memphis.

The golf star drank beer, red wine, vodka and champagne before grabbing a woman’s breast, pushing a member of the cabin crew and urinating on his first class seat on 29 July 2019, Aldersgate House Nightingale Court in London heard.

Olesen, of Chelsea, was cleared of the three charges of sexual assault, assault by beating and being drunk aboard an aircraft on Wednesday afternoon. 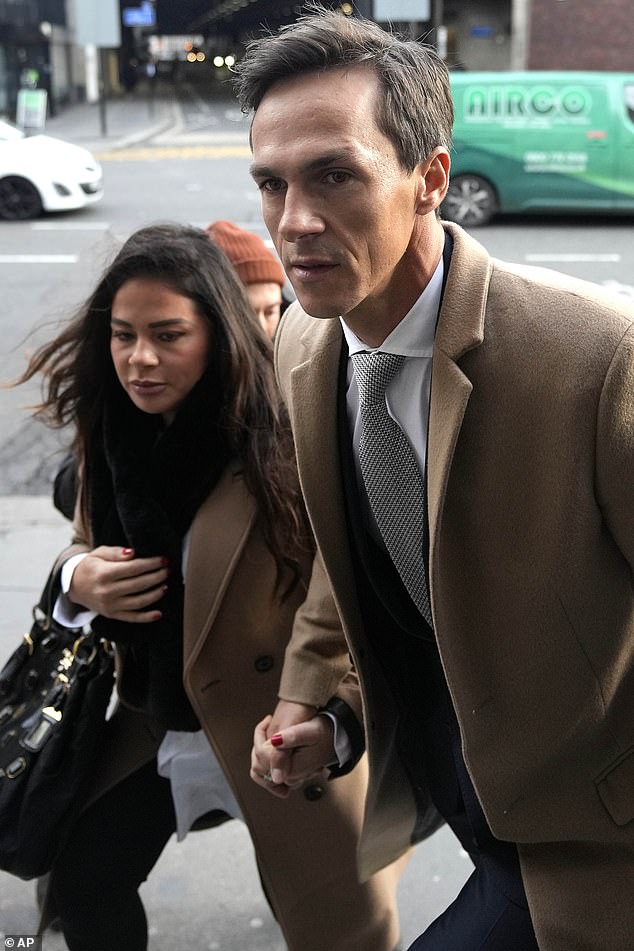 Thorbjørn Olesen (right), of Chelsea, west London, denied sexual assault, assault and being drunk on an aircraft on July 29, 2019, claiming he was not in control of himself at the time

Cabin crew tried to restrain the Dane as he wandered around the plane swearing, fleeing from staff ‘like a little boy’ and making the sign of the cross, Aldersgate House was told.

He pushed BA employee Sarah White, who has 28 years experience with the airline, when she tried to get him back into his seat then said ‘It’s all about you, isn’t it, just go away’.

Mr Poulter intervened and tried to get Olesen to settle down in his seat, but he began to walk around again, the court heard.

A male crew member was trying to escort Olesen back to his seat when the sportsman grabbed his hand and started to kiss it.

He then grabbed a woman’s hand and kissed it, before nuzzling her neck and putting his hand over her breast.

Olesen, who was returning from the WGC St Jude Invitational at the time, was then taken back to his seat where he began to cry, then fell asleep. 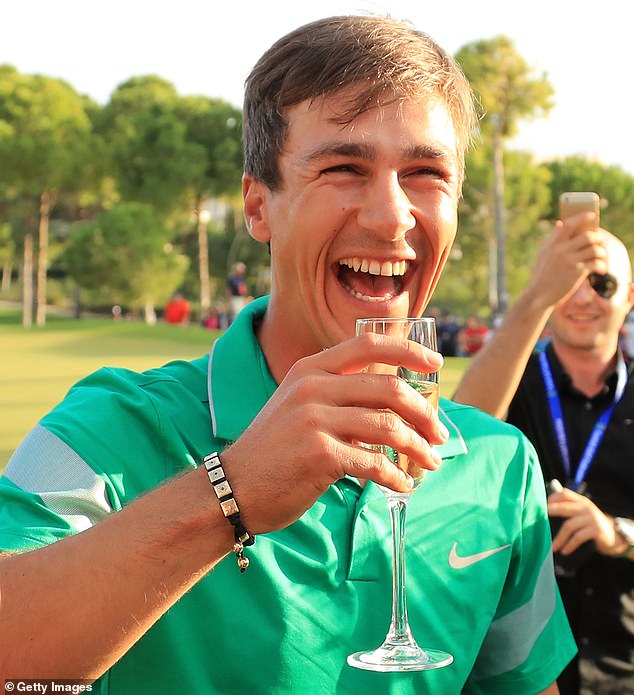 Another passenger then awoke to find Olesen standing in the aisle with his eyes closed, urinating onto his own seat, jurors heard.

The pro, a five-time winner on the European Tour and member of the winning 2018 European Ryder Cup team, was arrested when he landed at Heathrow.

Olesen told police he could not remember what happened on the flight, and had drunk ‘five or six drinks, a few glasses of red wine, a couple of beers and a vodka and cranberry.’

He denied and was cleared by the jury of sexual assault, assaulting Ms White by beating and being drunk on an aircraft.

Wearing a dark grey suit, Olesen wept with relief as the verdicts were announced after just one hour and two minutes of deliberations. His partner Lauren Zafer smiled as his caddie Dominic Bott also sobbed.

He ran a defence of ‘automatism’ claiming the mixture of Melatonin and Zolpidem sleeping tablets caused his ‘bizarre behaviour’.

Trevor Burke, QC, defending, said the combination of Zolpidem, better known under the brand name Ambien, and alcohol could have caused Olesen to behave in the way he did.

Mr Burke said: ‘This can produce complex, disinhibited, and unconscious behaviours that the defendant might have no memory of.

‘This was automatic behaviour over which he had no control and it was caused by Zolpidem.’

Olesen, who has played golf since he was six, has fallen from 51st place in the global rankings when he was arrested to just 440th today.

Olesen was immediately suspended from the European and American tour after news of his arrest broke, the court heard.

His sponsorships with Rolex, BMW, and Nike have been suspended since his arrest, the court heard.

The golfer said: ‘It has not been going very well,

‘I think it has been very difficult to concentrate on playing, you do not know if you will ever pay professional golf again.

‘I felt absolutely horrible and I was very sorry, I could not believe what they were saying that I had done.’

The Dane said he had never had an adverse reaction to sleeping pills before or since the incident.

He explained he had taken two of the pills he later discovered were Ambien, even though the recommended dose is just one pill.

Mr Burke asked the golfer: ‘Would you have consciously risked your career by committing a criminal offence?’

His partner, Lauren Zafer, an accountant at PricewaterhouseCoopers, told the court she had taken medication for her chronic insomnia for years and had ordered the Ambien pills from an online sleeping pill shop.

She said she may have put some Ambien pills into Olesen’s washbag in the past so she could use them in future when she needed them.

Ms Zafer told the court she only learnt what happened on the flight after Olesen came home after his arrest.

She said: ‘He was really scared, looked very remorseful, like his world had just ended, slightly confused.

‘He told me what the police had told him he had done.

‘I wasn’t believing what I was hearing because he just wouldn’t do any of this. It was shocking,

‘He said he had taken sleeping pills that I had left in his washbag.

‘My stomach turned inside out, because I knew that must have been the Ambien, and I felt tremendously guilty, this was my fault that this happened.’