Brasilia: Deforestation of the Amazon rainforest in Brazil sped up in May to the fastest rate in a decade, according to data from an early-warning satellite system, as experts pointed to activity by illegal loggers encouraged by the easing of environmental protections under President Jair Bolsonaro.

According to the Brazilian space research institute INPE, the DETER alerting system registered deforestation of 739 square kilometres in May, the first of three months in which logging tends to surge following the region's rainy season. 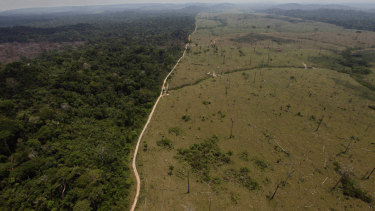 A deforested area near Novo Progresso in Brazil’s northern state of Para.Credit:AP

That is up from 550 square kilometres in May 2018 and more than double the deforestation detected two years earlier.

"If this upward curve continues, we could have a bad year for the Amazon forest," Claudio Almeida, head of INPE's satellite monitoring program, said on Tuesday. "It will depend on how much policing there is in the next two critical months," he added.

The data adds to concerns from environmentalists who warn that Bolsonaro's five-month-old government has dismantled conservation agencies, shown scepticism about fighting climate change and cut the budget to enforce environmental laws.

Brazil's environmental protection agency IBAMA, which has been starved of funds in recent years, lost authority when he took office in January, and the forestry commission was moved to the Agriculture Ministry, which is run by farm industry allies.

For Marcio Astrini, Greenpeace Brazil's public policy coordinator, Bolsonaro's government is "anti-environmental" and has pushed to reduce forest protections without presenting a plan to fight deforestation.

Bolsonaro's Environment Minister Ricardo Salles said in an interview with Reuters that Brazil remains as committed as ever to protecting the forests.

"We are not going to remove anything. We are going to add more," he said, denying a report in the Folha de Sao Paulo newspaper on Monday that monitoring by INPE, whose numbers he has said are manipulated, could be replaced with satellite imaging run by a private firm.

Salles said a public tender will be issued to hire a company that can do high resolution images in real time.

"We want a system that can provide images in real time to better target enforcement operations so that they can be more effective," the minister said.

Officials will watch to see if the preliminary DETER data showing deforestation speeding up in May is confirmed later this year by a more accurate satellite program called PRODES, which serves as the government benchmark.

PRODES imaging for the 12 months through July 2018 showed that 7,900 square kilometres of forest were cleared in Brazil's Amazon, equal to nearly the territory of Puerto Rico.

Still, deforestation remains well below levels in the early 2000s, before Brazil launched a campaign to fight logging. In 2004, for example, more than 27,000 square kilometres were cleared, an area the size of Haiti.