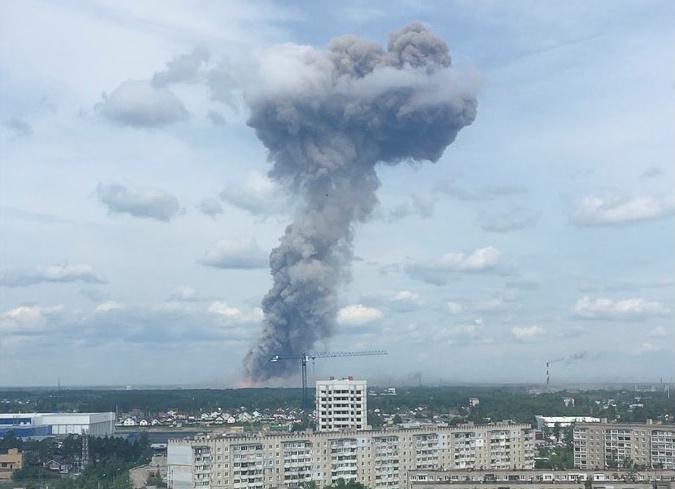 The blasts, around midday (0900 GMT) were heard all over the town of more than 230,000 residents and shock waves smashed or damaged windows in around 180 buildings, city authorities told TASS news agency.

Russian state TV Rossiya 24 showed footage of a plume of smoke rising over the explosives factory.

The Kristall plant said that its director had been fired “literally a day before” the blasts for violating industrial safety rules earlier in the year, Interfax reported. He was blamed for an explosion that occurred in April and also destroyed a section of the plant.

Thirty-eight of the injured were at the plant when the blasts occurred but 41 local residents from outside the factory, many hit by broken glass, also requested medical help.

The health ministry said that 15 of all the injured were taken to hospitals, mostly with fragment wounds. One of them, a woman, suffers a severe injury.

A local deputy governor told Rossiya 24 TV channel that two people went missing after the blasts but later he said that the information had not been confirmed.

Dzerzhinsk is close to the city of Nizhny Novgorod, about 400 km (250 miles) east of Moscow. Founded in Soviet times, the Kristall scientific institute is one of the major Russian developers of explosives technology for military and civilian use. The plant is part of Russia’s Rostec, a state conglomerate which has been affected by Western sanctions over Russian policy toward Ukraine.

A section of the building where the blasts occurred was partially destroyed and a fire broke out at the facility, where explosives and ammunition, including aerial bombs, were stored, Russian news agencies said.

A neighboring building and a nearby forest also caught fire and the Russian emergency ministry reported that firefighters had managed to douse it around six hours after the blasts, Russian agencies said.