The state government has sought to urgently amend an administrative bungle after it was revealed protective service officers had been carrying pepper spray for more than two decades without legal authority.

The Police Minister’s office was recently notified about changes needed to exemptions in the Control of Weapons Act to allow the officers to continue carrying OC spray.

A Victoria Police spokeswoman said the “inadvertent gap” had since been closed with the Governor in Council this week providing an exemption to allow PSOs to carry the spray canisters. 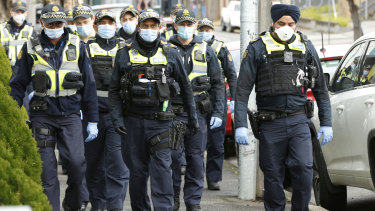 “The move means that PSOs, like police, now have a specific exemption from the application of laws which prohibit the carrying of weapons, including OC spray,” the spokeswoman said.

“It also means our PSOs can continue to operate as normal, conducting patrols, arresting offenders and keeping the community safe.

“Victoria Police understands that the gap in the exemptions was the result of an oversight in the legal drafting more than 20 years ago.”

The spokeswoman said police were in “ongoing discussions” with the Department of Justice and Community Safety to understand and address any further issues that may arise.

“Every time they go on a shift and they’re kitted out with their OC spray … they’ve committed an offence,” he said.

“The penalty is either … nearly $40,000 or two years' imprisonment. Of course they’re not going to be prosecuted.”

In 2018, the state government passed legislation to expand PSO powers to allow the specially trained officers to make arrests, conduct searches for drugs and respond to incidents.

Then, in April this year they were re-deployed out into communities in both metropolitan Melbourne and regional Victoria to help boost police resources during the COVID-19 pandemic.

Since emergency powers were implemented at the start of April, PSOs have arrested 406 people, handed out 293 infringement notices – including for breaches of COVID-19 restrictions – and stopped and checked more than 7000 people as part of Operation Shielding.

Opposition police spokesman David Southwick said capsicum spray was a prohibited weapon and may only be used by those exempted under the Control of Weapons Act 1990.